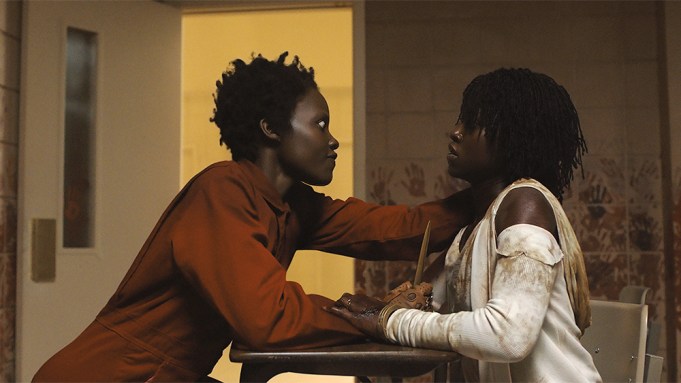 Jordan Peele’s “Us” is on its way to scaring up one of the biggest debuts of 2019, with an estimated $67 million from 3,741 North American locations.

The current projection is above earlier estimates, which had placed it in the $38 million to $50 million range, and marks quite a leg up over Peele’s last film, “Get Out.” That horror pic debuted to $33 million in 2017 and eventually amassed $167 million Stateside.

Lupita Nyong’o stars as Adelaide Wilson, a woman returning to her beachside childhood home with her husband (Winston Duke) and their two children (Shahadi Wright Joseph, Evan Alex) for a summer getaway. As her paranoia increases and she becomes more certain something bad will happen to her family, the silhouettes of four figures — the family’s doppelgangers — appear in the driveway.

Peele wrote and directed the pic, which Universal is distributing, and it’s the first solo production for Peele’s company, Monkeypaw Productions.

Also debuting this weekend at four locations is Bleecker Street’s “Hotel Mumbai,” starring Armie Hammer, Dev Patel, and Jason Isaacs. Directed by Anthony Maras, the film is based on the documentary “Surviving Mumbai,” which chronicled the 2008 attacks on the Taj Mahal Palace Hotel in India.

Meanwhile, “Captain Marvel” should far and away take the no. 2 slot, with an estimated $34 million in its third weekend. Disney-Marvel’s lastest MCU installment has pocketed $295 million domestically with another $538 million overseas, leaving it a little under $200 million shy of the $1 billion mark worldwide.

Three more holdovers will round out the top five, with the second frames of Lionsgate and CBS Films’ “Five Feet Apart” and Paramount’s “Wonder Park” headed for the $7 million to $9 million range and the fifth weekend of “How to Train Your Dragon: The Hidden World” at around $6 million.

Should “Five Feet Apart,” which stars Cole Sprouse and Haley Lu Richardson as two cystic fibrosis patients attempting to have a relationship, land at $7 million, it will have declined just 39% from its first weekend. The romantic drama has so far picked up $20 million domestically.

“Wonder Park,” an animated family pic starring the voice talents of Matthew Broderick, Jennifer Garner, Kenan Thompson, and Mila Kunis, has totaled $27 million globally, while “How to Train Your Dragon 3” has demonstrated its staying power with $140 million domestically and $330 million overseas.

A24’s “Gloria Bell” will expand to 654 locations and is heading to no. 8 with an estimated $1.4 million. Julianne Moore stars in Sebastian Lelio’s reimagining of his 2013 Spanish-language film “Gloria” alongside John Turturro and Michael Cera.