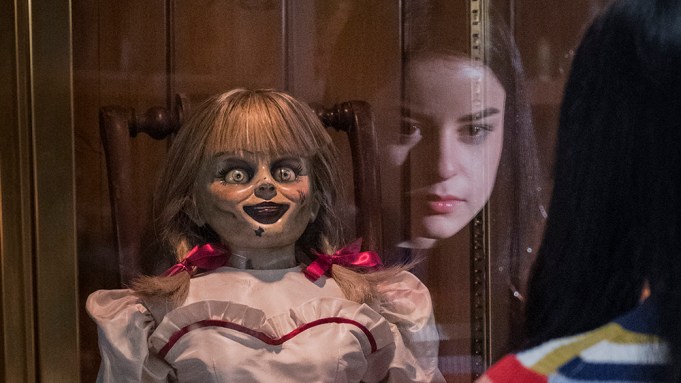 The weekend box office has gone to the dolls. “Annabelle Comes Home,” a supernatural horror film about a possessed toy, is facing off against another band of plastic figurines: “Toy Story 4.”

“Annabelle Comes Home” was written and directed by Gary Dauberman. The film centers on two demonologists (played by series vets Patrick Wilson and Vera Farmiga) who attempt to stop the possessed Annabelle doll from wreaking more havoc by secluding her in a locked room and recruiting a priest’s holy blessing. The couple’s young daughter (Mckenna Grace) becomes a target after Annabelle awakens evil spirits in the room.

Universal and Working Title’s “Yesterday,” another movie that dares audiences to suspend disbelief, albeit in a lighter fashion, is also opening nationwide. It follows an aspiring songwriter (newcomer Himesh Patel) who skyrockets to superstardom after a freak accident leaves him as the only person who remembers the Beatles. The studio anticipates a start near $10 million when it launches on 2,500 screens. Lily James, Kate McKinnon and Ed Sheeran, who plays himself, co-star in the movie. Danny Boyle, the filmmaker behind “Slumdog Millionaire” and “Trainspotting,” directed “Yesterday,” which was written by “Love Actually” screenwriter Richard Curtis.

Despite a crop of fresh releases, “Toy Story 4” should maintain the No. 1 spot. The fourth entry in Pixar’s animated series collected $118 million in its inaugural weekend. Positive reviews and solid word-of-mouth could translate into another big weekend for Woody, Buzz Lightyear and crew. If “Toy Story 4” sees a performance similar to other Pixar movies like “Toy Story 3,” “Incredibles 2” and “Coco,” the latest installment could earn another $52 million to $64 million during its second weekend in theaters.

Another Disney title, “Avengers: Endgame,” is hoping to get another box office boost this weekend. The studio is re-releasing the latest Marvel adventure in theaters in a bid to beat “Avatar’s” all-time box office record. Disney is enticing comic-book enthusiasts with an exclusive chance to see an unfinished deleted scene that didn’t make it into the initial film, as well as an introduction video by director Anthony Russo and a sneak peek at “Spider-Man: Far From Home.” James Cameron’s “Avatar” has remained the highest-grossing film of all time for nearly a decade with $2.78 billion in global ticket sales. Disney is determined to overtake that record with “Avengers: Endgame,” which has pocketed $2.75 billion to date. It now needs roughly $43 million to beat “Avatar.” The appetite for a second run of “Avengers: Endgame” so soon after the film debuted is still a question mark, even with a fanbase as loyal as superhero buffs. All things considered, the prospect of ultimate box office glory could be within reach.