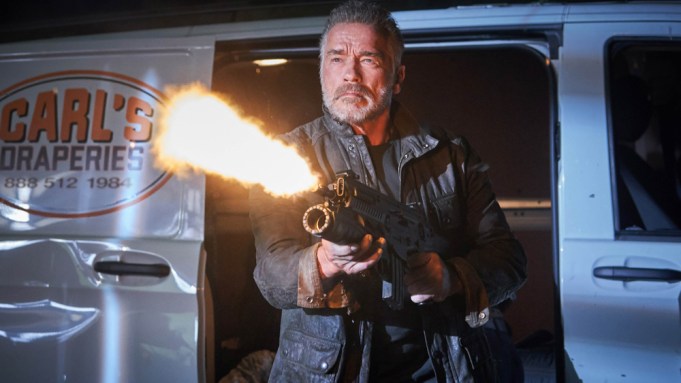 “Terminator” might not be back any time soon. “Dark Fate,” the most recent installment in the sci-fi series, fell flat at the box office and stands to be a big money loser for Paramount, Skydance and Disney, the studios backing the big-budget tentpole.

The sixth “Terminator” entry debuted with a dismal $29 million in North America and $102 million overseas, disappointing figures for a movie that cost $185 million to produce, plus $80 million to $100 million in global marketing and distribution fees. Unless “Terminator: Dark Fate” sees an exceptionally strong hold in the coming weeks, sources at rival studios estimate the movie could lose $100 million theatrically. It will be able to earn back some of that money in television and streaming licensing deals, as well as through home entertainment sales and rentals.

Paramount, Skydance and Disney (through 20th Century Fox) co-financed the movie, meaning any potential damages will be broken up among the Hollywood companies. The three studios each put up 30% of the budget, with China’s Tencent contributing the remaining cash. Box office experts say the film needs to earn around $450 million to break even but predict that “Terminator: Dark Fate” will end its box office run with an uninspiring $180 million to $200 million globally.

Paramount and Skydance, the companies responsible for releasing “Dark Fate” domestically, hoped the latest movie would kick off with over $40 million in North America, but after it fell short of expectations, insiders at rival studios suggest it’s unlikely “Dark Fate” will hit triple digits in the U.S. and might not even pass $70 million over the course of its entire theatrical run.

The film failed to make up much ground overseas, where it’s playing in 80% of foreign territories. China was expected to be a key market for the tentpole release, but launched with an underwhelming $28 million. After a weak start, sources estimate it could struggle to reach $50 million in that domain.

“They made a bad decision in greenlighting this film with this particular budget,” said Eric Handler, a media analyst with MKM Partners. “They were clearly hoping this franchise could still resonate overseas, and it didn’t really do that.”

The most recent “Terminator” films — 2009’s “Terminator Salvation” and 2015’s “Terminator Genisys” — were both panned by critics and failed to recoup their pricey budgets. “Terminator: Dark Fate” was hailed as a return to form for the 35-year-old franchise, even landing a B+ Cinemascore from audiences and a 69% average on Rotten Tomatoes. But not even the presence of original stars Arnold Schwarzenegger and Linda Hamilton, along with series creator James Cameron on board as a producer could reignite interest among moviegoers. Despite mostly positive reviews, critics said the latest entry didn’t bring much new to the decades-old series, which has been mined and mined again for numerous offshoots and TV shows.

“This is an aging franchise with aging actors, and the reviews were mediocre,” Handler said. “As good of a franchise as this might have been, it doesn’t have the same appeal now.”

In “Dark Fate,” Hamilton’s Sarah Connor must protect a young girl from a deadly new Terminator from the future. Tim Miller (“Deadpool”) directed the sequel from a screenplay by David S. Goyer, Justin Rhodes and Billy Ray.

“Terminator: Dark Fate” is the second high-profile misfire for Paramount and Skydance this fall following “Gemini Man.” The action thriller starring Will Smith and directed by Ang Lee cost $135 million and has generated $153 million worldwide since debuting in October.

Up next, Skydance is teaming with Netflix for “6 Underground,” an action thriller starring Ryan Reynolds that starts streaming on Dec. 13.

Paramount scored over the summer with “Rocketman,” an R-rated musical biopic about Elton John that amassed $195 million globally. It also fielded modest successes with thrillers “Crawl” ($90 million) and “Pet Sematary” ($112 million). However, the twin failures of “Gemini Man” and “Terminator: Dark Fate” end the year on a sour note for Paramount. Its only remaining theatrical release in 2019 is John Cena’s comedy “Playing With Fire.” The studio will look ahead to 2020 hoping to recapture its former glory with sequels to “A Quiet Place” and “Top Gun.”