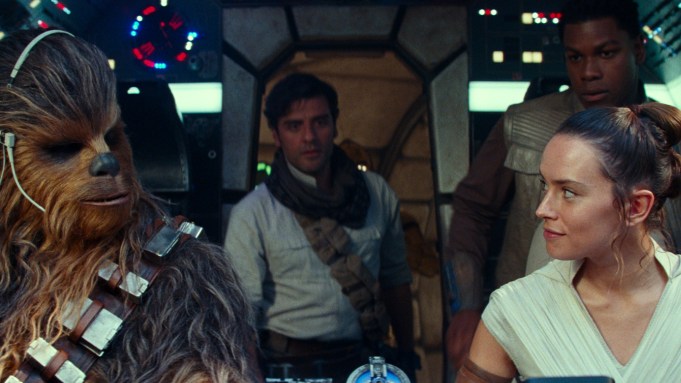 “Star Wars: The Rise of Skywalker” is powering toward a mighty opening weekend when it hits theaters Dec. 20.

Given demand for the Skywalker saga’s epic conclusion, Disney and Lucasfilm’s sci-fi space opera is on pace for a start between $175 million and $200 million, according to early tracking. While that figure won’t come close to dethroning “Avengers: Endgame” and its historic $357 million launch, it would still rank among the best domestic debuts of all time.

Disney is aiming to manage expectations since tracking has been unreliable in recent weeks, but box office watchers are optimistic that “Rise of Skywalker” will end the year on a high note. Overall ticket sales have plunged over 7% from last year, according to Comscore, so exhibitors and studios alike are banking on an especially lucrative holiday moviegoing season to help close that gap.

Directed by J.J. Abrams, “Star Wars: The Rise of Skywalker” serves as the third entry in the sequel trilogy behind 2015’s “The Force Awakens” and 2017’s “The Last Jedi.” Abrams also directed “The Force Awakens,” which still stands the highest-grossing movie ever in North America with $936 million.

“The Rise of Skywalker” picks up a year after the events of “The Last Jedi” and sees the Resistance again face off against the First Order, while tensions between the Jedi and the Sith finally conclude. The cast includes Mark Hamill, Adam Driver, Daisy Ridley, John Boyega and Oscar Isaac. Carrie Fisher, who died in 2016 before filming commenced, will appear through unused footage from the prior “Star Wars” movies.

“Star Wars” will close out Disney’s unprecedented year at the box office. The studio shattered records with “Avengers: Endgame,” the biggest movie in history. Four other films released this year — “The Lion King,” “Captain Marvel,” “Toy Story 4” and “Aladdin” — have grossed over $1 billion. “Frozen 2” and “Star Wars: The Rise of Skywalker” could add to that tally.

While “Star Wars: The Rise of Skywalker” will easily crush box office competition, it arrives against what could be a cinematic spectacle in its own right: Universal’s “Cats.” The musical, based on Andrew Lloyd Webber’s long-running Broadway show, has received polarizing reactions (to be kind) to the trailer’s confusing blend of CGI and “digital fur technology.” How the internet’s levels of intrigue translates into commercial appeal remains to be seen.

Tom Hooper (“Les Miserables,” “The King’s Speech”) is bringing “Cats” to life with a star-studded cast including Idris Elba, Judi Dench, Jennifer Hudson, Taylor Swift, James Corden, Rebel Wilson, Ian McKellen and Jason Derulo. It centers on a tribe of cats called the Jellicles, one of which will be selected to receive a new life.