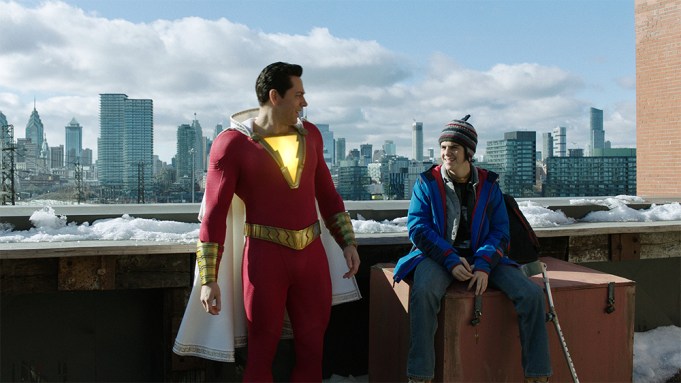 Warner Bros.’ “Shazam!” is powering to the top of the domestic box office with an estimated $51 million from 4,217 North American locations in its debut.

Asher Angel stars in the film as a young boy named Billy Batson who transforms into the titular adult superhero (Zachary Levi) when he says “Shazam.” David F. Sandberg directed from a script by Henry Gayden. The film has received an A CinemaScore and a 91% certified fresh rating on Rotten Tomatoes.

Paramount’s remake of “Pet Sematary” should conjure up about $23 million from 3,585 domestic sites after taking in around $10 million on Friday to land in second.

Kevin Kölsch and Dennis Widmyer directed the second film adaptation of Stephen King’s novel, which stars John Lithgow, Jason Clarke, and Amy Seitmetz. It has a 61% on Rotten Tomatoes and a C+ CinemaScore — fairly typical for horror flicks.

Meanwhile, three top-performing holdovers will round out the top five at the box office. Disney’s live-action reimagining of “Dumbo” should pocket another $18 million in its second frame, while the third weekend of Jordan Peele’s “Us” will likely land in fourth with $14 million. Disney-Marvel’s “Captain Marvel” should drop into fifth with an estimated $12 million in its fifth frame.

“Dumbo’s” estimate marks a steep 60% decline for the large-eared elephant. It’s totaled $136 million worldwide since its release, with $62 million from domestic theaters.

Horror pic “Us” has totaled $142 million Stateside for Universal since its Mar. 22 release along with another $46 million domestically. “Captain Marvel” crossed the $1 billion mark worldwide earlier this week.

Sam Rockwell and Taraji P. Henson star as Ann Atwater and C.P. Ellis, an outspoken civil rights activist and a Ku Klux Klan leader, respectively, who reluctantly co-chair a community summit, battling over the desegregation of schools in Durham, North Carolina during the racially-charged summer of 1971. The film has received an A CinemaScore.