Box Office: ‘Shazam!’ to Remain No. 1 as ‘Hellboy’ Fizzles 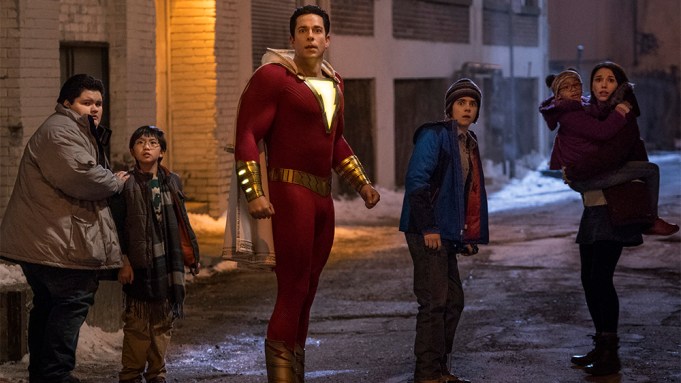 Warner Bros.’ “Shazam!” is powering its way to a super second weekend, retaining its No. 1 spot at the box office with an estimated $22 million.

Meanwhile, Lionsgate’s remake of “Hellboy” is getting scorched, with just $12 million estimated from 3,303 domestic locations in its debut weekend. That number would place it at No. 3 after Universal’s body-swap comedy “Little,” with about $15 million.

“Shazam!” has so far generated $76 million domestically for WB and New Line, with another $126 million overseas. David F. Sandberg directed the film, which stars Zachary Levi as the titular superhero.

The third “Hellboy” adaptation is coming in below earlier projections, which had placed it in the $16 million to $20 million range. The film, starring “Stranger Things'” David Harbour in the titular role, took in $4.93 million on Friday. It cost about $50 million to produce, so if estimates hold, “Hellboy’s” start could look ominous.

The original 2004 film, written and directed by Guillermo del Toro, took in $23 million in its debut. Its sequel, “Hellboy II: The Golden Army,” brought in $34.5 million in its first weekend. Del Toro was not involved with the latest iteration, with Neil Marshall helming and Andrew Cosby writing the script.

Universal’s “Little” picked up $6.3 million on Friday. The fantasy comedy stars Regina Hall as an overbearing boss who is transformed into a young version of herself, played by Marsai Martin. Tina Gordon directed the film from a script she co-wrote with Tracy Oliver, and “Insecure’s” Issa Rae also stars. Reviews have been mixed, and it’s currently sitting at 50% on Rotten Tomatoes with a B+ CinemaScore.

Elsewhere, Aviron’s “After” is debuting at 2,138 locations and is estimated to pocket about $7.7 million. The romantic drama, adapted by Susan McMartin, Tamara Chestna, and director Jenny Gage from a new adult fiction novel, took in $2.9 million on Friday. It’s earned a B CinemaScore and is a 13% rating on Rotten Tomatoes. Josephine Langford stars alongside Hero Fiennes-Tiffin.

Stop-motion animated adventure film “Missing Link” should reel in around $5.5 million in its debut at 3,413 North American sites after drawing $1.6 million on Friday. Directed by Chris Butler, the film follows an explorer who sets out to find a Sasquatch, and after doing so, must escort him on his way to meet his relatives, the Yetis, in the Himalayas. United Artists Releasing is distributing the film, which earned a B+ CinemaScore and 88% certified fresh score on Rotten Tomatoes.

Two holdovers will round out the top five, with “Pet Sematary” and “Dumbo” each looking to add another $8 million to their coffers. Paramount’s horror remake has so far totaled $34 million domestically, while Disney’s live-action adaptation has yielded $83 million in its first 15 days.