After ‘Judy’ Wows on Opening Weekend, How High Can It Go? 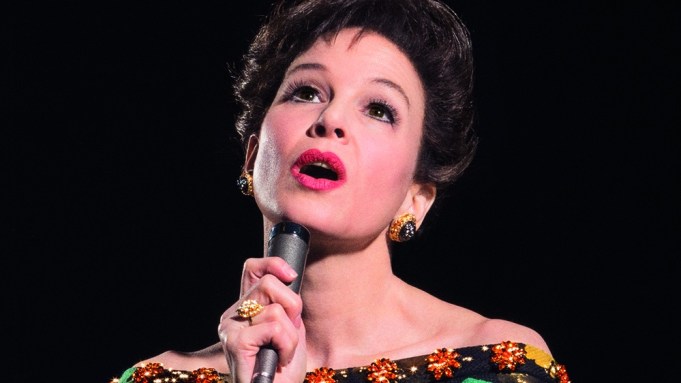 Boosted by Oscar talk for Zellweger’s portrayal of the famed entertainer, “Judy” struck a chord with moviegoers and collected a promising $3 million. That haul is especially impressive considering it opened in just 461 North American theaters, translating to $6,705 from each location and marking the highest screen average of the weekend. If its limited debut is any indication, “Judy” could end up in the category of prestige films that are both loved and seen. Next weekend, the musical biopic will expand to 1,400 to 1,500 screens.

“This is an incredibly promising start and bodes well for its future, both at the box office and during awards season,” said Paul Dergarabedian, a senior media analyst with Comscore. “If this film started in 2,000 theaters, you’re taking a huge risk. By going between that and a four-theater run, you get a big enough footprint to make an impression and then you have time for word of mouth about movie’s brilliance to get out.”

Roadside Attractions and LD Entertainment opted for a slightly larger screen count than a typical platform release because the specialty studios felt the premise of “Judy,” matched with a well-known leading lady, was easily digestible in trailers and other marketing materials. It’s a strategy that Roadside first deployed with 2012’s “Mud” starring Matthew McConaughey, later in 2014 with Philip Seymour Hoffman’s “A Most Wanted Man” and again with the studio’s 2015 Sherlock Holmes drama “Mr. Holmes” with Ian McKellen. All three films achieved modest box office successes.

“We think ‘Judy’ has big potential, but we wanted to find a middle ground,” said Howard Cohen, Roadside Attractions’ co-founder and president. “We felt that if you live in Cleveland or Oklahoma City or Minneapolis, you would ask why the movie wasn’t opening right away.”

“It’s a movie with a star and an idea that is easily communicated in marketing, but we didn’t think it was right for a wide release because it’s still a more serious drama,” Cohen added. ”’Judy’ is not ‘Bohemian Rhapsody.’ It’s not about a rock star and it doesn’t end with a stadium tour. It’s much more quiet and edgy.”

Dergarabedian notes that buzz out of major film festivals like Telluride and Toronto helped elevate its profile. Zellweger, returning to the big screen after a hiatus, has also been making the rounds on late-night television and in the press.

“Renee Zellweger and the director [Rupert Goold] have been out there pushing this movie like it’s a blockbuster, not a smaller scale biopic,” Dergarabedian said. “But if the movie didn’t have the goods to back it up, [the promotion] would fall on deaf ears.”

Roadside elected to release the movie in late September, ahead of the onslaught of awards season hopefuls that will hit the big screen over the next three months.

“That was very deliberate on our part,” Cohen said. “We couldn’t plan on it, but we were hoping there would be buzz out of the festivals. We timed [the debut] very specifically toward that as opposed to waiting until December and needing actual nominations. We liked being first out of the gate among Oscar movies.”

“Judy” also caught the wave of “Hustlers” and “Downton Abbey,” the type of entertainment geared toward female audiences that studios have mostly abandoned in favor of comic-book adventures. In the case of “Judy,” 60% of moviegoers were female, while nearly 80% were over the age of 35. Audiences awarded the film with an A- CinemaScore.

“With an older audience, we believe if you build it they will come,” Cohen said. “If there’s something good, they will show. It’s a relatively loyal audience.”