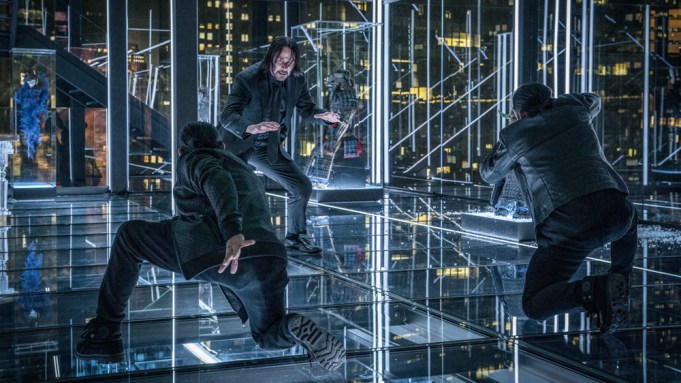 The debut of Lionsgate’s “John Wick: Chapter 3 — Parabellum” should end “Avengers: Endgame’s” reign at No. 1 with an estimated $56 million from 3,850 North American locations.

The threequel took in $22.67 million on Friday. “John Wick: Chapter Two,” the previous installment of the franchise, opened to $30.4 million in February of 2017.

“Avengers: Endgame,” on the other hand, should notch around $29 million in its fourth weekend in theaters for the second place spot. “Endgame” is currently sitting at around $2.5 billion worldwide — the second highest-grossing film of all time, behind “Avatar” with $2.78 billion.

Another new offering for the weekend, “A Dog’s Journey,” is debuting to about $8 million and No. 4 from 3,267 domestic sites. The follow-up to 2017’s “A Dog’s Purpose” sees the return of Dennis Quaid and Josh Gad, and was directed by Gail Mancuso from W. Bruce Cameron, Cathryn Michon, Maya Forbes, and Wally Wolodarsky’s script. “A Dog’s Purpose” debuted somewhat more strongly, netting $18 million in its first weekend on its way to a $64 million total.

Warner Bros.’ “The Sun Is Also a Star” is opening this weekend at 2,073 North American sites, having taken in $1.04 million on Friday. The teen drama stars “Grown-ish’s” Yara Shahidi and Charles Melton and follows a young couple that falls in love despite one of their families facing deportation. Tracy Oliver wrote the screenplay with Ry Russo-Young directing.

The second frame of Warner Bros.’ “Detective Pikachu” will likely take third with about $22 million. It’s taken in $69 million domestically in its first week of release, in addition to another $112 million from overseas markets.

Meanwhile, Anne Hathaway and Rebel Wilson’s con woman pic “The Hustle” should rustle up another $6 million in its second weekend to land in fifth place. That numer will tack onto its current total of about $18 million.