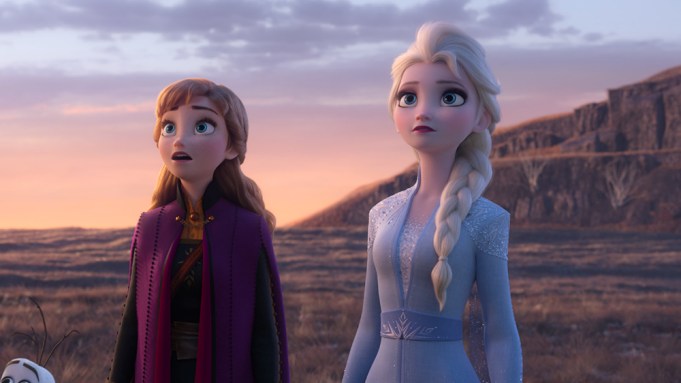 UPDATED: Disney’s “Frozen 2” iced out the box office competition in North America, where family audiences powered the animated adventure to a dazzling $130 million domestic debut, according to Monday’s final tally.

The sequel, playing in 4,440 theaters, ignited above expectations ahead of Thanksgiving, which should parlay into an especially lucrative holiday frame. “Frozen 2” set a November record for an animated movie and secured the third-best start for an animated film behind “Incredibles 2” ($182 million) and “Finding Dory” ($135 million). It also stands as the biggest opening weekend ever for Walt Disney Animation (not including Pixar) and ranks as the first animated movie to hit triple digits in its inaugural outing outside of summer.

Overseas, the animated adventure generated $228 million for a massive worldwide start of $358 million, the largest day-and-date global animated debut in history. Already, five Disney movies this year have crossed $1 billion at the box office and if its momentum sustains, “Frozen 2” could make it six.

While “Frozen 2” won’t single-handedly reverse fortunes from an otherwise underwhelming November at the domestic box office, the sequel was a necessary victory in helping chip away deficit. As of Sunday, ticket sales are down over 7% from 2018, according to Comscore.

The first “Frozen” launched before Thanksgiving in 2013, collecting $93 million during its first five days in theaters. Brimming with hits like “Do You Want to Build a Snowman?” and “Let It Go” that have since become classics, the original became a certified sensation and still stands as the highest-grossing animated movie in history with $1.3 billion gobally.

“Frozen 2” received a slightly less enthusiastic, though still glowing, reception from audiences, who awarded it an A- CinemaScore compared to “Frozen’s” A+.

“There was certainly a high bar,” said Disney’s president of global distribution Cathleen Taff, “but the creative team put together a journey that feels really authentic. It’s resonating with fans and general audiences alike, so we think it will play right into the holiday weekend.”

In “Frozen 2,” Princesses Elsa (voiced by Idina Menzel) and Anna (Kristen Bell) reunite with Kristoff (Jonathan Groff) and Olaf (Josh Gad) to embark on an adventure beyond Arendelle to find out why Elsa was born with magical powers. The follow-up sees the return of directors Jennifer Lee and Chris Buck, as well as original songwriters Kristen Anderson-Lopez and Robert Lopez.

Also new to multiplexes, Sony’s “A Beautiful Day in the Neighborhood” kicked off in third place with $13.5 million from 3,235 theaters, a solid start given its $25 million price tag. Box office watchers expect the feel-good film will have a long run in theaters over the holidays.

Tom Hanks stars as Fred Rogers in “A Beautiful Day in the Neighborhood,” a biographical drama chronicling the real-life friendship between the beloved TV personality and journalist Tom Junod (portrayed by Matthew Rhys). Marielle Heller (“Can You Ever Forgive Me?”) directed the movie, inspired by Junod’s Esquire article “Can You Say… Hero?”

Another newcomer, STX’s suspense thriller “21 Bridges” starring Chadwick Boseman, followed behind at No. 4 with $9.2 million from 2,665 venues. Produced by the Russo brothers, the film earned a B+ CinemaScore and drew a mostly older male audience. Over 50% of ticket buyers were male, while 75% were over the age of 25.

“21 Bridges” follows NYPD detective (Boseman) who closes down every bridge in Manhattan as part of a citywide manhunt after a drug heist gone wrong. It carries a $33 million budget.

This weekend was an undisputed win for Disney as “Ford v Ferrari” finished its sophomore outing in second place, collecting $16 million for a domestic tally of $57 million. Those figures, combined with “Frozen 2,” boosted the studio past the $3.5 billion mark domestically (including Fox movies), the third time Disney has reached that particular milestone.

Elsewhere, Sony’s “Charlie’s Angels” stumbled in its second weekend, suffering a painful 62% decline to $3.1 million for a domestic total of $13.9 million.

At the specialty box office, Todd Haynes’ legal thriller “Dark Waters” began its platform release, generating $110,000 from four theaters. The movie will expand to 100 venues on Wednesday. Mark Ruffalo and Anne Hathaway star in “Dark Waters,” based on a 2016 New York Times article about the lawyer who took on the Dupont chemical company.

Focus Features, who is distributing the film, is encouraged by its 91% rating on Rotten Tomatoes and positive exit polls and expects a strong showing from audiences during Thanksgiving.

Thanksgiving, one of the busiest times of year for moviegoing, will see Lionsgate’s whodunit “Knives Out” and Universal’s thriller “Queen & Slim” hit theater marquees. For Rian Johnson’s star-studded murder mystery, Lionsgate held early access screenings across the country, bringing in $2 million ahead of its Wednesday launch.