Will Disney’s ‘Dumbo’ Remake Take Off at the Box Office? 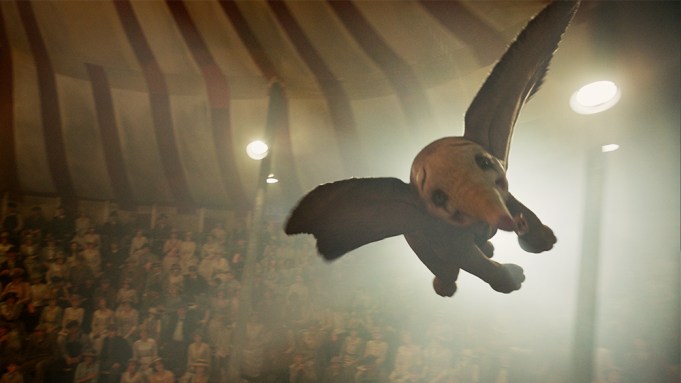 Disney’s upcoming adaptation of “Dumbo” is taking flight this weekend.

Directed by Tim Burton, the studio’s live-action re-imagining of the 1941 cartoon is expected to earn roughly $50 million when it launches in 4,200 North American venues. Independent tracking services anticipate the opening weekend could fall anywhere between $40 million and $58 million. Should those estimates hold, “Dumbo” looks to easily nab the No. 1 spot at the domestic box office.

However, that would be a smaller debut than the studio’s other remakes like 2017’s “Beauty and the Beast” ($174 million) and 2016’s “The Jungle Book” ($103 million). Those two titles were massive successes for the Mouse House, capping off their theatrical runs with $1.2 billion and $966 million worldwide, respectively. Part of the reason for the softer opening is likely because the original film about “Dumbo” hit screens in 1941. “The Jungle Book” was released in 1967 while “Beauty and the Beast” bowed in 1991, making the character seem slightly dated.

“Dumbo” is the first of three Disney remakes returning to the big screen in 2019: Guy Ritchie’s take on “Aladdin” and Jon Favreau’s star-studded “The Lion King” are both arriving this summer. Those films, along with the studio’s highly anticipated superhero mashup “Avengers: Endgame,” will likely offset any pain should “Dumbo” fail to connect with audiences.

Reviews don’t necessarily sway the target demographic for kid-friendly films, but it doesn’t look like “Dumbo” will benefit from word-of-mouth. The fantasy adventure hasn’t received the same kind of love from critics that other classic adaptations have enjoyed. It currently holds a tepid 52% on Rotten Tomatoes. Variety’s Owen Gleiberman called the movie “forgettable,” saying “it transforms a gentle and miraculous tale into a routine story by weighing it down with a lot of nuts and bolts it didn’t need.”

“Dumbo” will also face formidable competition on the family front. Disney’s “Captain Marvel” is still powering the domestic box office, and next weekend sees the release of Warner Bros. “Shazam,” a lighter, more comedic take on the superhero genre that could entice younger crowds.

“Dumbo” expands on the original hour-long cartoon about an baby elephant with inconveniently large ears. This adventure takes place at a struggling circus, where its former star (Colin Farrell) and his two kids are enlisted by the ringmaster (Danny Devito) to care for a newborn pachyderm nicknamed Dumbo. When the children discover that the animal can fly, a nefarious businessman (Michael Keaton) lures Dumbo to be the main attraction at his new amusement park.

“Dumbo’s” biggest obstacle for first place is a whole lot scarier than a villainous Michael Keaton. Universal’s “Us,” from writer-director Jordan Peele, could have a very lucrative second weekend in theaters. The terrifying thriller about a family forced to fend off their blood-thirsty doppelgangers shattered expectations when it delivered a stellar $70 million debut. Horror movies have notoriously steep drop-offs, but hype surrounding Peele’s second directorial effort might just be enough to keep moviegoers around. Even if it doesn’t have the kind of hold that “Get Out,” Peele’s debut film that became a cultural touchstone, saw in its second weekend, “Us” will still have reason to cheer. It more than quadrupled its $20 million production budget in its first three days of release — a scary-good result.

The high-flying elephant isn’t the only newcomer jetting into multiplexes this weekend. Pure Flix’s Christian drama “Unplanned” and Neon’s comedy “The Beach Bum” will also arrive on the silver screen.

“Unplanned,” which tells the true story of a Planned Parenthood employee who has a life-changing experience, is aiming for single digits, around $3 million, when it debuts on 1,000 screens. It cost $6 million to produce.