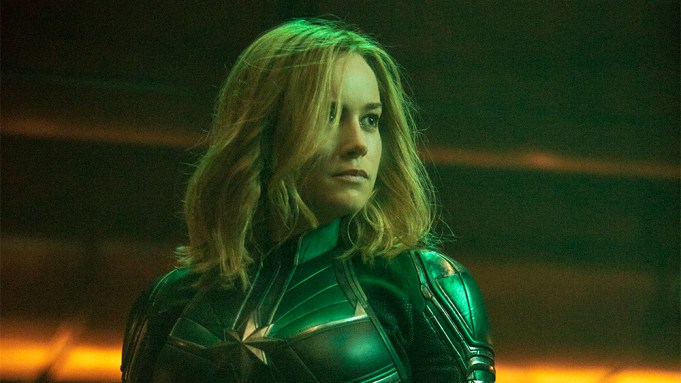 Some insiders are indicating “Captain Marvel’s” debut tally could be slightly more conservative, in the $145 million-$155 million range. The pic, which stars Brie Larson as Captain Marvel/Carol Danvers, has already taken in $127 million internationally, including a $34.3 million opening day in China, the second highest MCU opening day in the territory.

Samuel L. Jackson, Ben Mendelsohn, Lashana Lynch, Jude Law, Annette Bening, Clark Gregg, and Gemma Chan also star in “Captain Marvel,” which was written and directed by Anna Boden and Ryan Fleck. Larson stars as Vers, a Kree warrior with a murky past who discovers her history is not quite what she had always believed. It’s the first Marvel film to star a female superhero, and has landed an A CinemaScore and 79% Rotten Tomatoes score.

Elsewhere, a series of holdovers will fill out the remaining four slots at the box office.

“How to Train Your Dragon’s” third frame should yield about $15 million for second place, tacking onto a domestic total of $104 million. The animated three-quel has also earned $280 million overseas.

“Tyler Perry’s A Madea Family Funeral” will likely land in third, with an estimated $11 million in its second weekend. Lionsgate’s Madea finale has taken in $37 million domestically in its first eight days, which means this weekend’s take will push it close to $45 million.

Warner Bros.’ “Lego Movie 2: The Second Part” and Fox’s “Alita: Battle Angel” will battle it out for fourth place, with each estimated to earn around $3 million in their fifth and fourth weekends, respectively. “Alita” will have totaled about $78.3 million through the weekend if estimates hold, while “Lego Movie 2” has amassed $94 million Stateside and another $63 million overseas. “Alita” has also generated $285 million overseas, bringing the costly production closer to profitability.

Also hitting theaters this weekend at five locations is “Gloria Bell,” which premiered at the Toronto International Film Festival and stars Julianne Moore. A24’s drama was written and directed by Sebastian Lelio, and is a re-imagining of his 2013 Chilean-Spanish film “Gloria.”