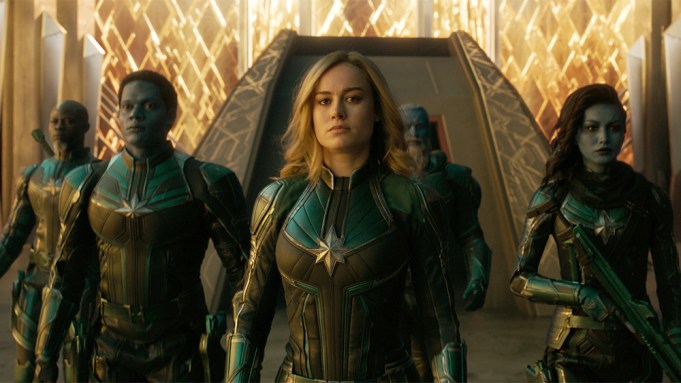 “Captain Marvel” brought in a mighty $87 million globally this weekend, including $52 million from international territories. It has now generated $589 million overseas for a global haul of $910 million. At the domestic box office, “Captain Marvel” brought in an impressive $35 million during its third weekend of release, bringing its North American tally to $320 million.

It now ranks as the 10th-biggest comic-book release of all time, surpassing the lifetime hauls of superhero movies like “Thor: Ragnarok” ($854 million), “Venom” ($855 million), and “Spider-Man: Homecoming” ($880 million).

“Captain Marvel” injected a much-needed boost into the worldwide box office. It’s far and away the biggest movie of the year. It’s no surprise, considering Marvel positioned the film as an essential stepping stone ahead of “Avengers: Endgame,” the epic conclusion arriving this summer that will determine the fate of a number of Earth’s Mightiest Heroes. At the end of “Avengers: Infinity War,” Marvel set up Larson’s Carol Danvers as the last, best hope after Thanos turned half of life in the universe to dust.

Meanwhile, Jordan Peele’s “Us” launched abroad with $16.7 million from 47 foreign markets. Starring Lupita Nyong’o and Winston Duke, the psychological thriller about a family terrorized by a group of doppelgangers drummed up a massive $70 million at the domestic box office for a worldwide start of $86.95 million. “Us” saw the best debut in the United Kingdom ($3.7 million), followed by France ($2 million), Spain ($1.2 million), and Germany ($1.4 million).

Aside from “Captain Marvel” and “Us,” Hollywood movies took a backseat overseas. “More Than Blue,” a remake of the 2009 South Korean film, amassed $29.6 million from six territories for a global tally of $136 million. Chinese titles “Song of Youth” and “Money” rounded out box office charts, generating $11.2 million, and $10.3 million, respectively.