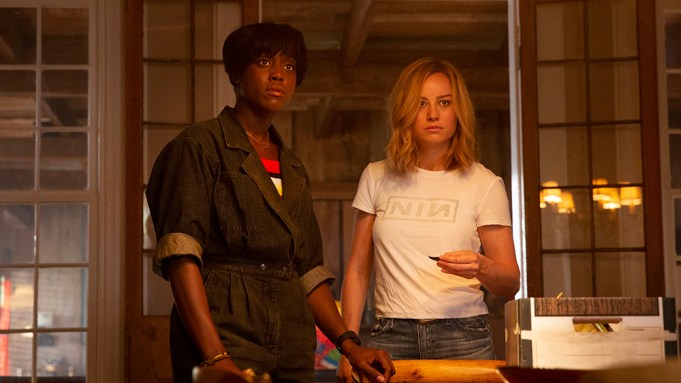 The second frame of Disney-Marvel’s latest MCU installment, “Captain Marvel,” is set to top the box office with an estimated $70 million.

The superhero film already pushed past the $200 million mark domestically after taking in $19 million on Friday for a total of about $215 million. It’s also generated $378 million overseas after jolting the domestic box office out of a slump that had seen it down 27% from last year.

Paramount’s animated adventure film “Wonder Park” should drop into second place with about $17 million from 3,838 North American locations, while CBS Films and Lionsgate’s “Five Feet Apart” is estimated to bring in about $13 million from 2,803 domestic sites for third place.

“Wonder Park,” which earned $5.35 million on Friday, features a voice cast including Brianna Denski, Matthew Broderick, Jennifer Garner, Ken Hudson Campbell, Kenan Thompson, Ken Jeong, Mila Kunis, John Oliver, Kath Soucie, Norbert Leo Butz, and Kevin Chamberlin. It follows 10-year-old June, who discovers the Wonderland she created in her imagination has come to life after her mother falls ill. With a screenplay by Josh Appelbaum and Andre Nemec, the film has a B+ CinemaScore and 29% Rotten Tomatoes rating.

Meanwhile, “Five Feet Apart” grossed $5.37 million on Friday. “Jane the Virgin” star Justin Baldoni directed from a script by Mikki Daughtry and Tobias Iaconis. Haley Lu Richardson and Cole Sprouse star as two cystic fibrosis patients who try to have a relationship despite being forced to remain the titular five feet apart at all times. The romantic drama received a 54% Rotten Tomatoes rating with an 83% Audience Score and A CinemaScore.

Two holdovers should round out the remaining spots in the top five, with Universal’s “How to Train Your Dragon: The Hidden World” pocketing another $9 million in its fifth weekend and Lionsgate’s “A Madea Family Funeral” picking up $8 million in its third frame. “How to Train Your Dragon 3” has totaled $128 million domestically with an additional $317 million overseas. The final “Madea” installment has so far grossed $53 million worldwide.

Also releasing this weekend is “No Manches Frida 2” from Lionsgate’s Pantelion Films at 472 sites. With an estimated $4 million for the weekend, the Spanish language sequel film is likely to land at No. 6 after garnering $1.3 million on Friday. The first installment in the comedy series opened to $3.6 million over Labor Day weekend in 2016. Nacho G. Velilla directed from David S. Olivas, Claudio Herrera and Sergio Adrian Sánchez’s screenplay, which is based on Bora Dagtekin’s film “Fack Ju Göhte.”

Focus Features is debuting “Captive State” at 2,548 locations for an estimated $3 million. Starring John Goodman, Ashton Sanders, Jonathan Majors, Machine Gun Kelly, and Vera Farmiga, the sci fi thriller follows a young man who joins a conspiracy to rebel against an alien race that has taken over Earth. Rupert Wyatt directed from a script he co-wrote with Erica Beeny. It’s earned a 53% Rotten Tomatoes score and C- CinemaScore.

“The Mustang,” also from Focus Features, will debut at four locations this weekend. Matthias Schoenaerts stars in the American-French-Belgian drama as a prisoner who forms a bond with a wild horse. The film is Laure de Clermont-Tonnerre’s directorial debut; he also co-wrote the screenplay with Mona Fastvold and Brock Norman Brock.