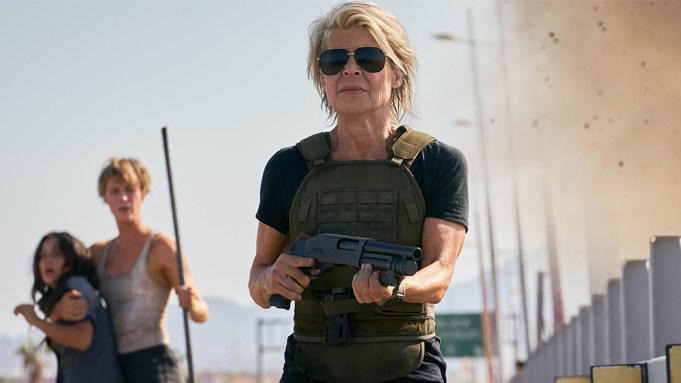 The most recent Thursday night Halloween previews took place in 2013 when “Ender’s Game” pulled in $1.4 million and went on to collect $27 million for the weekend domestically.

“Terminator: Dark Fate,” the sixth installment in the sci-fi series, has been forecast to dominate the weekend with around $40 million at 4,086 North American sites.

It’s the first franchise entry since 1991’s “Terminator 2: Judgment Day” that has series creator James Cameron and star Linda Hamilton on board, with Arnold Schwarzenegger also returning. Cameron is producing with David Ellison while Schwarzenegger and Hamilton are reprising their respective roles as the original T-800 Terminator and resistance leader Sarah Connor.

Reviews have been mostly positive with a 71% “fresh” rating on Rotten Tomatoes, scoring a better response from critics than other recent “Terminator” entries.

Should “Dark Fate” top forecasts, it could become the biggest opener in the franchise. That distinction currently belongs to 2003’s “Terminator 3: Rise of the Machines” with $44 million. The most recent entry, 2015’s “Terminator Genisys,” bowed with $2.3 million in Tuesday night previews for a five-day weekend of $27 million and ended its box office run with $89.7 million in North America and $440 million globally. “Terminator 2: Judgment Day” remains the highest-grossing iteration with $520 million worldwide.

The third weekend of Disney’s “Maleficent: MIstress of Evil” and the fifth weekend of “Joker” will likely battle for second place in the $10 million to $12 million range. Overall 2019 North American box office has improved in recent months but still trails last year by 5.3% at $9.23 billion as of Oct. 30, according to Comscore.

“Another incredibly diverse slate of newcomers makes this a great time to be a moviegoer, with a seemingly endless supply of cinematic options,” said Paul Dergarabedian, senior media analyst with Comscore.