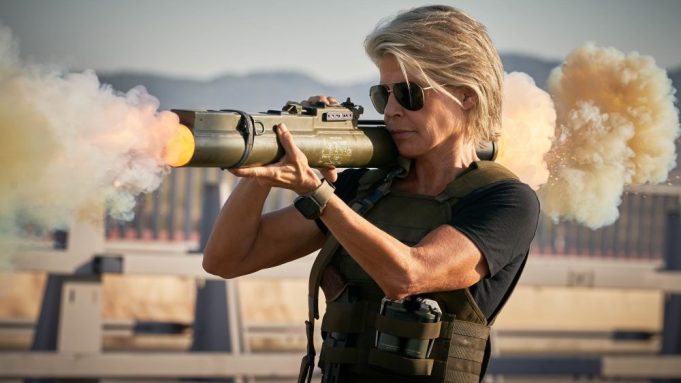 The sixth installment in the “Terminator” franchise landed in first place on domestic box office charts, but the results are disappointing given the film’s $185 million budget. Heading into the weekend, the movie was expected to collect over $40 million during its first three days in theaters. A start above $40 million seemed attainable since reviews were strong and audience sentiment was overwhelmingly positive. “Joker” could have cannibalized ticket sales for “Terminator” since both film’s catered to younger men. For “Dark Fate,” 60% of opening weekend crowds were male, over half of which were under the age of 30.

International audiences might give the film a boost, though China only brought in a middling $28 million and could continue to stall in coming weeks. Overseas, “Terminator: Dark Fate” earned another $72.9 million for a global tally of $123 million. Disney is releasing the movie in all foreign territories aside from China, where Tencent Pictures is handling distribution. Paramount, Skydance and Disney co-financed the movie.

“Terminator” might not be the only film with a dark fate at multiplexes. Edward Norton’s “Motherless Brooklyn” barely cracked the top 10, generating a paltry $3.6 million when it bowed in 1,300 North American theaters. Warner Bros.’ spent a modest $26 million to produce the neo-noir crime drama, based on Joanthan Lethem’s novel. In addition to writing and directing the long-gestating film, Norton stars as a private investigator with Tourette syndrome who works to solve the murder of his mentor. The cast also includes Bruce Willis, Gugu Mbatha-Raw, Bobby Cannavale and Alec Baldwin.

“It’s our hope that positive word of mouth will propel the movie,” said Jeff Goldstein, Warner Bros.’ president of domestic distribution. “It was an extremely well done movie, and it’s diverse programming. I think it’s a movie people are talking about.”

Fellow new release, Focus Features’ “Harriet,” had a far more promising start at the domestic box office, arriving at No. 4 with $12 million from 2,059 venues, ahead of expectations. The film boasts a rare A+ Cinemascore from audiences, signaling the historical drama could continue to benefit from positive word of mouth. Older female moviegoers drove inaugural sales: 62% were women and 59% were over the age of 35. African Americans accounted for nearly 50% of ticket buyers.

“Harriet” carries a $17 million production budget, which should help it pave a clear path toward profitability. Adding to the plaudits for Focus Features, it’s the first specialty studio in 15 years with two back-to-back films that debuted above $10 million. In September, the company released “Downton Abbey,” which launched with a better-than-expected $31 million and has since earned $94.5 million at the domestic box office.

“Audiences have been unanimous for their love of this film, which is clear from its A+ CinemaScore and 98% Audience rating on Rotten Tomatoes,” said Lisa Bunnell, Focus Features’ president of distribution. “With the story of one woman’s strength that literally change the world we all live in today, it is the feel-great movie people are looking for — becoming an event for friends and families going to see together.”

Adds producer Debra Martin Chase, “This is not a slave movie. This is a movie that says we cannot control the circumstances into which we are born, but we can control what we do once we get here.”

Meanwhile, Warner Bros.’ “Joker” benefitted from Halloween and held steady at No. 2, declining just 29% to $13.6 million in its fifth weekend of release. “Joker” has generated a huge $299 million in North America and $934 million globally, putting Joaquin Phoenix’s super-villain origin story on track to clear the $1 billion mark worldwide.

Adds Warner Bros.’ Goldstein, “It really hit the zeitgeist globally in a way that audiences are interested in. The story had so much traction because of the realness of the characters.”

Holdovers Disney’s “Maleficent: Mistress of Evil” and MGM’s “The Addams Family” rounded out the top five. Angelina Jolie’s “Maleficent” sequel profited from the spooky spirit, landing in third with $12 million. After three weeks of release, “Mistress of Evil” has made $84 million in North America and $299 million overseas. At No. 5, “The Addams Family” brought in $8.5 million, boosting its domestic tally to $85 million.

Among specialty releases, Errol Morris’ Steve Bannon documentary “American Dharma” launched exclusively at NY’s Film Forum, pocketing $7,522 from the one venue. The film is expected to expand to Los Angeles next weekend.

Netflix’s “The Irishman” also debuted in a handful of theaters, though the company declined to report box office grosses. The mobster drama — directed by Martin Scorsese and starring Al Pacino and Robert De Niro — launches on the streaming service Nov. 27.

Overall, domestic box office receipts declined 18% from the same weekend in 2018, pushing year-over-year sales down over 5%, according to Comscore.