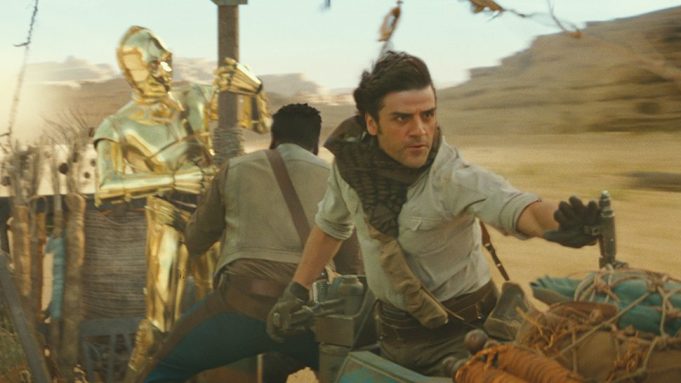 Despite mixed reviews and concerns of franchise fatigue, the force is still strong with “Star Wars.” “The Rise of Skywalker” turbocharged the box office this weekend as the ninth installment set in a galaxy far, far away generated a massive $176 million in U.S. theaters and $374 million globally.

Those domestic ticket sales didn’t come close to matching the opening weekend of its trilogy predecessors, 2015’s “The Force Awakens” ($248 million) and 2017’s “The Last Jedi” ($220 million). Still, “Rise of Skywalker” represents one of the biggest debuts of 2019, as well as the third-best start for a December release behind “Force Awakens” and “Last Jedi.”

“This is a great start for the kind of film you want to see in theaters,” said Cathleen Taff, Disney’s president of global distribution. “We’re excited to see audiences showing up. The great thing about ‘Star Wars’ is it’s so beloved and people are so passionate about it. [Director] J.J. Abrams and [Lucasfilm president] Kathleen Kennedy did a beautiful job in honoring that legacy.”

J.J. Abrams returned behind the camera for “Rise of Skywalker,” having previously directed “The Force Awakens.” The first entry in the sequel trilogy is still the biggest movie in U.S. history with $936 million. “The Force Awakens” went on to collect $2 billion globally, while “The Last Jedi” earned $1.3 billion worldwide.

“‘Rise of Skywalker’ won’t match ‘The Last Jedi’s’ overall numbers, but that said, it’s a problem any other studio would love to have,” said Jeff Bock, an analyst with Exhibitor Relations. “The fact that this wasn’t their strongest outing and it still made an insane amount of money [shows] this is a cash cow. The fan base is unlike any other in Hollywood.”

The latest trilogy has been insanely profitable, though poorly received by die-hard “Star Wars” enthusiasts. Even so, “Rise of Skywalker” is the only entry since Disney acquired Lucasfilm that didn’t receive an A CinemaScore from audiences. (It landed a B+ grade). That perception, combined with competition from “Jumanji: The Next Level,” could spell a smaller multiple for the conclusion to the Skywalker saga.

Even if “Rise of Skywalker” falls short of its series brethren, it still strengthens Disney’s historic year at the box office. Six movies in 2019 surpassed $1 billion globally, and the latest “Star Wars” could make it seven. Those record figures pushed Disney past $10 billion worldwide, the first studio to ever hit that benchmark.

Outside of “Star Wars,” movies that launch around the holidays typically stick around in multiplexes for a while, making them less reliant on opening weekend numbers. But nine lives in theaters might not be enough to help some films find an audience.

Moviegoers did not make the Jellicle choice to see “Cats,” Universal’s big-screen adaptation of Andrew Lloyd Webber’s 1981 stage show. The studio was hoping the starry cast and curiosity to see the art form known as “digital fur technology” would propel domestic box office to at least $15 million. But the musical, directed by Tom Hooper, couldn’t overcome ferocious reviews and arrived at the Jellicle ball in fourth place with just $6.5 million in ticket sales. That’s a dismal result for a movie that cost $100 million before accounting for global marketing and distribution fees.

Females represented over 50% of opening weekend crowds, while 55% of ticket buyers were between the ages of 18 and 44. Jim Orr, Universal’s president of domestic distribution, pointed out that older patrons don’t traditionally rush out to theaters on opening weekend.

“That audience will very much enjoy Tom Hooper’s take on this fantastical tale as Christmas and the holidays roll out,” Orr said. “He really did create something that’s visually very fun and entertaining.”

“Cats” did little to instill optimism overseas, kicking off in the United Kingdom and Ireland with $4.4 million. For perspective, Disney’s “Frozen 2” made more money from just domestic theaters in its fifth weekend of release ($12.4 million) than “Cats” earned globally this weekend ($10.9 million).

Universal is still hoping that, like Fox’s breakout hit “The Greatest Showman,” “Cats” might endure still on the big screen. “The Greatest Showman” launched with $8.8 million in 2017, ultimately finding favor with audiences before ending its theatrical run with an impressive $174 million. But that film, starring Hugh Jackman as circus ringmaster P.T. Barnum, was well received by ticket buyers, who awarded it with an A CinemaScore rating and returned many times for singalong screenings. “Cats,” on the other paw, landed a C+ CinemaScore, signaling the spectacle of sorts was hardly the cat’s meow. “Cats” will need help from more than the magical Mr. Mistoffelees to compete for movie theater screens during the competitive Christmas season.

In a distant second, Sony’s “Jumanji” withstood a 56% decline from its inaugural outing and scored another $26.2 million. The Dwayne Johnson and Kevin Hart-led sequel has earned $102 million at the domestic box office and $312 million worldwide.

Elsewhere, Terrence Malick’s “A Hidden Life” collected $250,000 when it expanded to 106 theaters across North America, translating to $2,350 per venue. Fox Searchlight intends to continue a slow platform release through January.

Overall, “Rise of Skywalker” did help close the year-to-date box office deficit, albeit by a small margin. Heading into the weekend, ticket sales were down over 5% from 2018, according to Comscore. That number has now shrunken to 4.6%.