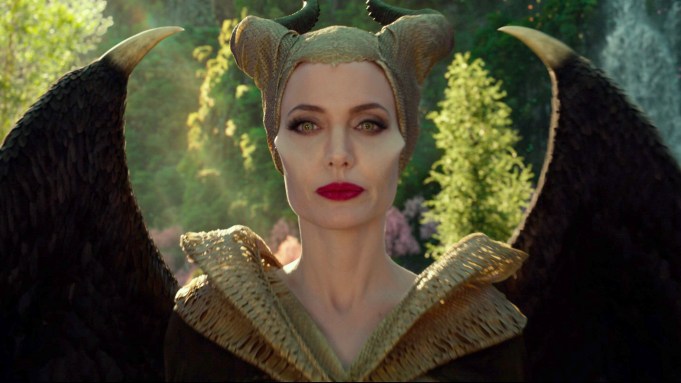 Five years after Angelina Jolie’s “Maleficent” cast a spell over the box office, the villainous enchantress has returned to the top of domestic charts. Disney’s “Maleficent: Mistress of Evil,” a sequel to 2014’s fantasy adventure based on the “Sleeping Beauty” sorceress, flew lower than the original and debuted to a disappointing $36 million from 2,790 North American theaters, nearly half of what the first movie made in its inaugural outing ($69 million).

Despite opening below projections heading into the weekend, “Maleficent: Mistress of Evil” easily towered over competition including holdover from Warner Bros.’ “Joker” and newcomer Sony’s “Zombieland: Double Tap.” The “Maleficent” follow-up did benefit as one of the few offerings catering to younger female moviegoers in a marketplace that’s been largely dominated by male-skewed titles like “Joker” and Paramount’s “Gemini Man.” Women represented 56% of ticket buyers, about 50% of which were under the age of 25.

“Maleficent: Mistress of Evil” now marks the lowest opening weekend of the year for Disney and will have to rely on the international box office to recoup its $185 million budget. The film had much more promising showing overseas, lifting off with $117 million for a global start of $153 million. The original pulled in a mighty $517 million from foreign territories and another $241 million from the domestic market.

Given its A CinemaScore and a 96% Rotten Tomatoes audience average, Disney’s president of global distribution Cathleen Taff says the studio remains optimistic that “Maleficent: Mistress of Evil” will have legs in coming weeks.

“While it’s a lower opening than we had expected, we do think we have a good start for October with a great window leading into Halloween,” Taff said. “With great word of mouth, audiences will gravitate to the film.”

After its two-week reign atop domestic box office charts, “Joker” slid to second place and added $29 million in its third weekend of release. That puts the dark supervillain origin story — starring Joaquin Phoenix and directed by Todd Phillips — close to the $250 million mark in North America with box office receipts currently at $247 million. Overseas, “Joker” has scared up a mighty $490 million for a worldwide bounty of $737.5 million.

MGM and United Artists Releasing’s “The Addams Family” finished the weekend in fourth place, dipping 47% to $16 million in its second outing, which puts North American ticket sales at $56.8 million. Rounding out the top five is “Gemini Man,” which declined 58% from its inaugural weekend to $8.5 million. Ang Lee’s sci-fi epic, starring Will Smith, continues to suffer with its domestic tally hovering at $36.5 million.

In box office milestones, STX and Lorene Scafaria’s “Hustlers” crossed the coveted $100 million benchmark at the domestic market. After six weeks in theaters, “Hustlers” pulled in another $2 million, boosting its haul to $101.8 million in North America and $128.8 million globally.

Meanwhile, Focus Features’ “Downton Abbey” has surpassed $88 million in the States and now stands as the studio’s highest-grossing movie ever at the domestic box office, a record previously held by “Brokeback Mountain” with $83 million.

Among awards season hopefuls, Fox Searchlight’s “Jojo Rabbit” bowed with a strong $350,000 from five theaters in New York and Los Angeles, averaging $70,000 from each location. Written and directed by Taika Waititi (who also stars in the film as an absurdist imaginary Adolf Hitler), “Jojo Rabbit” is set during World War II and follows a young boy eager to join the Hitler Youth, who discovers his mother is hiding a Jewish girl in their attic. Critics have been mostly impressed with “Jojo Rabbit” (it holds a 77% on Rotten Tomatoes), while audiences have awarded it with an A CinemaScore.

“There are many reasons to be very optimistic about the future of ‘Jojo Rabbit,'” said Frank Rodriguez, Fox Searchlight’s president of domestic distribution. “Notably, the very good performance at the box office this weekend, the excellent CinemaScore of A, and the interest that we see from exhibitors and moviegoers who are eager to play and see the film in the coming weeks.”

Elsewhere, Robert Eggers’ “The Lighthouse” took in $419,764 from eight venues. A24 and New Regency’s darkly comedic drama, led by Robert Pattinson and Willem Dafoe, will continue to expand nationwide next weekend, where it will play on 500 screens.

Also at the specialty box office, Neon’s “Parasite” landed at No. 11 on domestic charts and generated an impressive $1.2 million from just 33 theaters in its sophomore frame. From director Bong Joon ho, the acclaimed social satire has made $1.8 million to date.

Overall, the domestic box office remains down 5% from last year, according to Comscore.