Box Office: ‘Jumanji: The Next Level’ Heading for $50 Million as ‘Richard Jewell’ Sputters 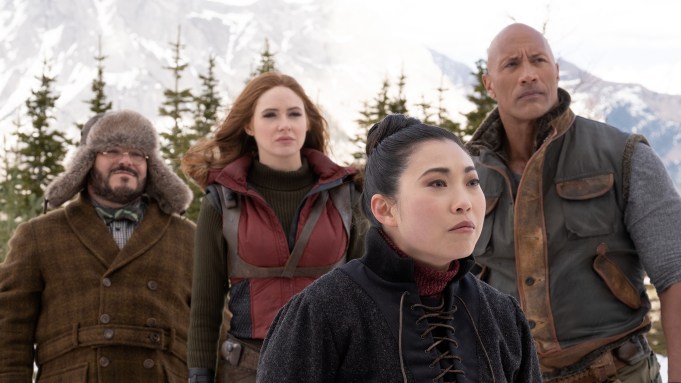 “Frozen 2’s” reign at the box office is finally over: Sony’s “Jumanji: The Next Level” is on its way to a winning $50 million debut.

Directed by Jake Kasdan from a screenplay he co-wrote with Jeff Pinkner and Scott Rosenberg, “Jumanji: The Next Level” sees the characters from Sony’s 2017 blockbuster return to rescue one of their own from the infamous game. In addition to Johnson, Black, Gillan, and Hart, Nick Jonas also reprises his role alongside franchise newcomers Awkwafina, Alex Wolff, Morgan Turner, Ser’Darius Blain, Madison Iseman, Danny Glover and Danny DeVito. Kasdan, Johnson, Matt Tolmach, Dany Garcia, and Hiram Garcia produced the film, which has a 67% Rotten Tomatoes score.

Fellow new releases “Black Christmas” and “Richard Jewell” are both coming in significantly below earlier tracking forecasts, which had placed them in the $10 million to $12 million range. They’re now on track to battle for the No. 4 slot with about $4.5 million each.

Universal’s “Black Christmas,” a remake of the 1974 slasher film, picked up $1.8 million on Friday. The thriller follows a group of sorority sisters who are beset by a mysterious stalker. Imogen Poots, Aleyse Shannon, Lily Donoghue, Brittany O’Grady, Caleb Eberhardt, and Cary Elwes star in the film, directed by Sophia Takal. “Black Christmas” has a 43% Rotten Tomatoes score and D+ CinemaScore, though Variety critic Owen Gleiberman called it “deviously sensational” and commended it for being “actually rooted in something relevant and interesting.”

Clint Eastwood’s “Richard Jewell,” which stars Paul Walter Hauser, Sam Rockwell, Jon Hamm, and Olivia Wilde, took in $1.5 million on Friday from 2,502 domestic sites. The Warner Bros. drama has been the subject of controversy leading up to its release due to the depiction of real-life journalist Kathy Scruggs (Wilde), who appears to trade sex for news tips in the movie. On Thursday, Wilde posted a series of messages on Twitter stating that she was under the impression when filming that her character had a pre-existing relationship with the FBI agent she sleeps with (Hamm). Eastwood directed the film, which has earned a 75% Rotten Tomatoes score and A CinemaScore, from a script by Billy Ray.

Awards contenders “A Hidden Life” and “Bombshell” also make their limited debuts this weekend, with Terrence Malick’s latest feature pulling in $16,000 on Friday from five theaters. Jay Roach’s Fox News/Roger Ailes drama, starring Nicole Kidman, Charlize Theron and Margot Robbie, took in a stellar $134,000 from four theaters on Friday and is headed for about $284,000 through the weekend.

Meanwhile, “Frozen 2” should land in second after being dethroned by “Jumanji 2” with about $18 million. The animated adventure is nearing the $1 billion mark globally, with $931 million worldwide. Rian Johnson’s “Knives Out” should generate another $9.2 million this weekend for the third place slot. The whodunit has earned $72 million domestically since its release, along with $61 million internationally for a global total of $133 million.