Continue to Variety SKIP AD
You will be redirected back to your article in seconds
Dec 7, 2019 8:23am PT 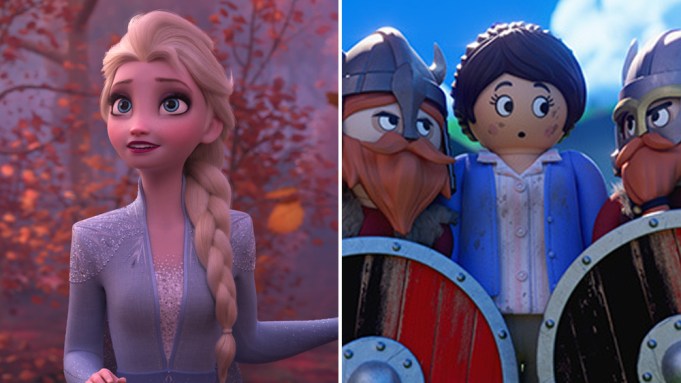 Disney’s “Frozen 2” will continue to dominate the box office for the third weekend in a row with an estimated $33.8 million.

The number marks a roughly 67% decline over last weekend. The hit animated sequel has accumulated $310.8 million domestically through Friday, and will likely become Disney’s sixth movie to cross $1 billion in 2019.

Meanwhile, the only major new release of the weekend, animated musical adventure film “Playmobil,” eked out a minuscule $167,000 from 2,337 North American locations on Friday, with an estimated $811,000 for the weekend. The movie is distributed by STX Films in North America, but the studio has no financial stake in the film, which cost $75 million to produce. Wild Bunch, Pathe, Dimitri Rassam and the Paris-based On Animation co-financed the French film.

Based on a chain of German building toys, “Playmobil” features a voice cast including Anya Taylor-Joy, Jim Gaffigan, Gabriel Bateman, Adam Lambert, Kenan Thompson, Meghan Trainor and Daniel Radcliffe. It follows secret agent Rex Dasher (Radcliffe), food truck driver Del (Gaffigan) and the mysterious Marla (Taylor-Joy) as they embark on a journey to rescue citizens who’ve been kidnapped by a top-secret organization. Lino Disalvo directed the film from a screenplay by Blaise Hemingway, Greg Erb and Jason Oremland. “Playmobil” has a middling B+ CinemaScore with 20% Rotten Tomatoes rating, though a more favorable audience score of 75%.

With no other major releases besides “Playmobil,” the weekend will be dominated by holdovers, including Lionsgate’s “Knives Out” slotting into second with around $14 million. Fox’s “Ford v Ferrari” should add about $6 million in its fourth frame, along with Universal’s “Queen & Slim” in its second weekend. Tom Hanks’ “A Beautiful Day in the Neighborhood” is looking at another $5 million for Sony.

Mark Ruffalo’s “Dark Waters” is adding 1,918 screens to its range with a projected weekend take of about $4 million, adding onto its worldwide gross of about $1.2 million. Focus Features is distributing Todd Haynes’ legal drama, which tells the real-life story of the lawyer that took on the DuPont chemical company.

Neon is debuting Celine Sciamma’s critical darling “Portrait of a Lady on Fire” at two locations. The drama stars Noemie Merlant and Adele Haenel as two women who fall in love after Merlant’s Marianne, a painter, is hired to secretly paint the wedding portrait of a young woman, Héloïse (Haenel). Hitting Imax theaters this weekend is Amazon’s historical adventure film “The Aeronauts,” which sees “Theory of Everything” stars Felicity Jones and Eddie Redmayne reunite as a pilot and scientist who must fight for survival after taking to the air in an experimental air balloon.