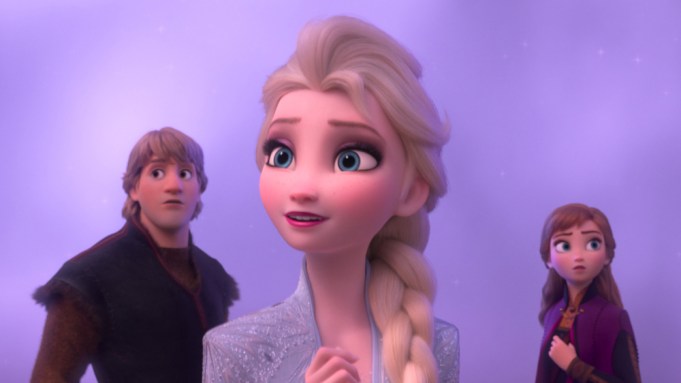 Disney’s “Frozen 2” is teed up to roast the pre-Thanksgiving weekend box office in its debut with an estimated $124 million from 4,440 North Americans locations.

In a very distant second could be the second frame of Fox’s “Ford v Ferrari” with about $15 million. However, Tom Hanks’ “A Beautiful Day in the Neighborhood” may provide some competition for the second place spot with about $14.1 million from 3,235 sites in its first weekend of release.

The debut of STX Films’ “21 Bridges” with Chadwick Boseman should land in fourth with about $10 million from 2,665 theaters while the third frame of John Cena’s “Playing With Fire” rounds out the top five with about $5 million.

“Frozen 2” earned $41.8 million domestically on Friday while adding another $57.8 million internationally for a nearly $100 million global single-day total. “Frozen 2’s” three-day domestic debut estimate is far above the initial $100 million that Disney had predicted for the sequel, and would make the movie the biggest release since the July launch of the live-action “The Lion King” with $191.8 million. The original film earned $93.6 million in its Thanksgiving debut, going on to total more than $1.2 billion globally.

“Frozen 2” arrives six years after the original “Frozen,” and sees the return of Anna (Kristen Bell), Elsa (Idina Menzel), Olaf (Josh Gad), and Kristoff (Jonathan Groff), as they venture beyond the kingdom of Arendelle to find out why Elsa was born with magical powers.

Meanwhile, “21 Bridges” took in $3.3 million on Friday. Produced by STX Films, MWM Studios and Huayi Brothers Pictures, the action thriller follows Boseman as an embattled NYPD detective, who is thrust into a citywide manhunt for a pair of cop killers after uncovering a massive and unexpected conspiracy. When the search intensifies, authorities close all 21 bridges off Manhattan to prevent the criminals from escaping. Sienna Miller, Stephan James, Keith David, Taylor Kitsch and J.K. Simmons also star. Brian Kirk directs from a script written by Adam Mervis and Matthew Michael Carnahan. The film has a 46% Rotten Tomatoes score and B+ CinemaScore.

“A Beautiful Day in the Neighborhood,” launched via Sony’s TriStar Pictures, totaled $4.54 million on Friday. Sony expects the heart-warming Fred Rogers biopic to be well-positioned for the lucrative Thanksgiving holiday and play through the Christmas holiday. Hanks stars as the iconic children’s television show host in the film, directed by Marielle Heller from Micah Fitzerman-Blue and Noah Harpster’s script. Matthew Rhys, Susan Kelechi Watson and Chris Cooper also star in the drama, which has a 96% certified fresh rating on Rotten Tomatoes.