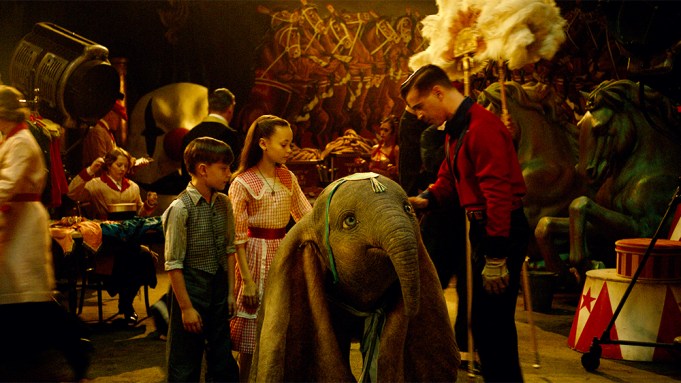 Disney’s “Dumbo” had an underwhelming liftoff at the domestic box office. Tim Burton’s live-action remake of the 1941 cartoon debuted with $45 million from 4,259 North American theaters, below expectations heading into the weekend.

While that was easily enough to top the domestic box office, it marks the lowest start among the studio’s recent live-action remakes of Disney classics. To compare, 2017’s “Beauty and the Beast” debuted with $174 million, 2016’s “The Jungle Book” opened with $103 million, and 2015’s “Cinderella” launched with $67 million.

Earlier estimates had indicated that “Dumbo” could surpass $50 million in its first three days of release. Part of the reason for the softer opening is likely that the original “Dumbo” cartoon debuted almost 80 years ago, making the lovable elephant seem somewhat less relevant than classics like “Beauty and the Beast” and “The Jungle Book,” which both became huge successes for the studio.

“Dumbo” carries a $170 million production budget, so the high-flying elephant will have to resonate overseas should “Dumbo” fail to pick up steam at the domestic box office. The movie launched in most international territories this weekend, amassing $71 million from foreign markets for a global start of $116 million.

Despite competition on the family front from movies like Disney’s “Captain Marvel” and Warner Bros.’ “Shazam,” which releases next weekend, the studio is optimistic that “Dumbo” will remain a draw for younger audiences. It’s one of the few PG movies currently in theaters. “Captain Marvel” and “Shazam” are both rated PG-13.

“We’re very encouraged by the start,” said Cathleen Taff, Disney’s head of global distribution. “Our Cinemascore is strong, and we’re well positioned as a top option for family audiences.”

Audiences were more receptive than critics to Tim Burton’s take on the baby elephant with inconveniently large ears. Moviegoers awarded “Dumbo” an A- Cinemascore, though it holds a 50% on Rotten Tomatoes. As expected, families made up 54% of opening weekend crowds. “Dumbo’s” audience also skewed slightly female: 53% of ticket buyers were women.

“Dumbo” is the first of three high-profile Disney re-imaginings heading to the big screen this year, with Guy Richie’s “Aladdin” and Jon Favreau’s “The Lion King” arriving in theaters this summer. Those films, along with the studio’s highly anticipated superhero mashup “Avengers: Endgame,” are expected to bring in big bucks for the Magic Kingdom.

Last weekend’s champ, “Us,” dropped to second place, staying strong with $33 million in its sophomore outing. That marks a 53% decline from its opening weekend haul, a solid hold considering the kind of drop horror movies typically suffer after their initial release. Written and directed by Jordan Peele, “Us” has now surpassed $128 million in ticket sales in North America. The film, which stars Lupita Nyong’o and Winston Duke as a couple forced to fight off blood-thirsty doppelgangers, cost $20 million to produce.

Coming in at No. 3, Disney’s “Captain Marvel” added another $20 million in its fourth weekend of release. That takes the superhero tentpole starring Brie Larson past $350 million in North America. It also generated $26 million overseas, bringing its global tally to a massive $990 million. At this pace, “Captain Marvel” should be the newest member of the billion-dollar club in no time.

Sunday estimates show “Five Feet Apart” pulling slightly ahead with $6.2 million, though numbers could change when final tallies arrive on Monday. Lionsgate and CBS Films’ romantic drama, now in its third weekend of release, has earned $35 million to date.

“Unplanned,” which tells the true story of Abby Johnson, a Planned Parenthood employee who has a life-changing experience, pulled in $6.1 million from 1,060 venues. From the faith-based production company Pure Flix, the pic doubled expectations that pegged an opening weekend around $3 million.

“To bring the story of Abby Johnson to audiences and have them show up in such large numbers shows how the topic of abortion is so important to bring to audiences,” said Michael Scott, Pure Flix CEO. “We hope that those on both sides of the debate will see ‘Unplanned’ and begin to have their own dialogue. This film can be that spark to bring more hearts and minds to understanding the value of life.”

Elsewhere, Matthew McConaughey suffered the worst opening of his career with “The Beach Bum.” Directed by Harmony Korine, the film flopped with $1.8 million from 1,100 screens. The studios initially planned for a platform release, which could have slowly allowed the film to gain traction through word-of-mouth. Instead, the stoner comedy opened nationwide with little marketing since its premiere at South by Southwest.

It’s been a rocky start to 2019 for McConaughey. Earlier this year, his film “Serenity,” a neo-noir thriller with Anne Hathaway, collapsed with a $4.5 million debut. It tapped out with $11.4 million worldwide.

In box office milestones, Universal’s “How to Train Your Dragon: The Hidden World” crossed $500 million in ticket sales worldwide. The finale in the “Dragon” trilogy has earned $152 million in North America, along with $348 million internationally.

Despite much-needed boosts from hits like “Captain Marvel” and “Us,” ticket sales at the domestic box office are down 16% from last year, according to Comscore. This weekend, however, is pacing just under 2% behind the same frame in 2018, when Steven Spielberg’s “Ready Player One” was the top film in North America. Upcoming titles like “Shazam” and “Pet Sematary” could help continue to close the gap and propel 2019 toward a mighty year.