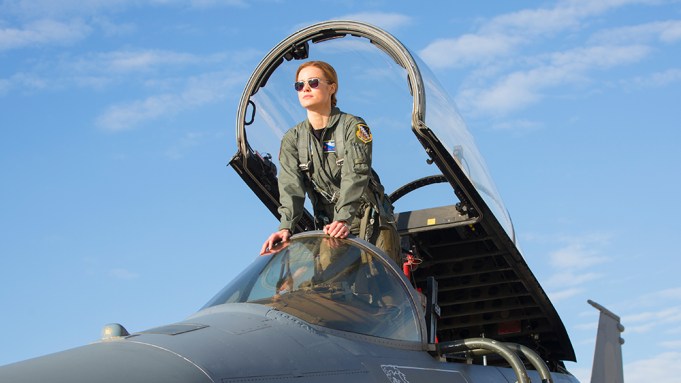 Disney’s “Captain Marvel” is looking to go higher, further, faster during its second weekend in theaters.

The superhero tentpole starring Brie Larson, which crossed $500 million in ticket sales worldwide in under a week, will easily dominate domestic box office charts again. Written and directed by Anna Boden and Ryan Fleck, “Captain Marvel” could generate another $70 million to $85 million in its sophomore outing if the blockbuster sees a decline similar to its superhero universe brethren like “Black Panther” and “Avengers: Infinity War.” As of Tuesday, it has now grossed $524 million globally, including a mighty $100 million in China.

“Captain Marvel,” the studio’s first comic-book adventure to spotlight a female superhero, injected a much-needed boost into an otherwise sluggish domestic market. Over the weekend, it posted a massive $153 million debut in North America, by far the biggest opening weekend of the year. “Captain Marvel” also secured the sixth-biggest global launch ever ($455 million) when it opened in all markets sans Japan. Combined, the 21 titles that make up Marvel’s Cinematic Universe have surpassed $18 billion in ticket sales worldwide.

While most studios avoided releasing any movies in “Captain Marvel’s” wake, there are a few contenders brave enough to take on Larson’s Carol Danvers this weekend. New offerings — Paramount Pictures’ “Wonder Park,” CBS Films and Lionsgate’s “Five Feet Apart,” and Focus Features and Participant Media’s “Captive State” — are catering the rare moviegoer who is looking for something other than superhero fare (or perhaps those who already caught a screening of “Captain Marvel” last weekend).

“Wonder Park,” an animated tale set in an amusement park based on the imagination of a young girl, is expected to have the best start among newcomers. It anticipates an opening weekend haul of $8 million to $14 million from 3,800 domestic venues. The studio is banking on “Wonder Park” to have strong word of mouth among audiences to help justify its hefty price tag over $80 million. Jennifer Garner, Matthew Broderick, John Oliver, and Mila Kunis round out the voice cast.

Beyond family friendly fare, “Five Feet Apart” is targeting female moviegoers and is expected to earn between $6 million and $10 million when it opens in over 2,600 locations. That’s a modest start considering it cost just $7 million to produce. “The Edge of Seventeen” and “Split” actress Haley Lu Richardson stars alongside Cole Sprouse in the romantic drama about two teenagers who meet and fall in love while being treated for cystic fibrosis. “Five Feet Apart” was directed Justin Baldoni, the actor best-known for his starring role on the CW’s “Jane the Virgin.”

Rounding out the marquee is “Captive State,” a fantasy thriller that should bring in a tepid $3 million from 2,500 screens. Directed by “The Rise of the Planet of the Apes” filmmaker Rupert Wyatt, “Captive State” is set in a Chicago neighborhood nearly a decade after being inhabited by an extraterrestrial force. The drama stars John Goodman, Ashton Sanders, and rapper Machine Gun Kelly.

At the specialty box office, Focus Features is releasing “The Mustang” in four theaters: AMC 19th Street and Landmark at 57 West in New York, along with Arclight Hollywood and Landmark in Los Angeles. The feature directorial debut of French actress Laure de Clermont-Tonnerre, which had its premiere at Sundance, follows a convict who participates in a rehabilitation program that involves training wild mustangs.