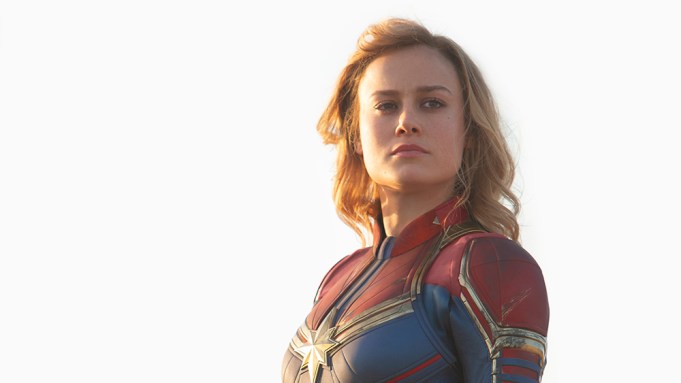 Brie Larson’s “Captain Marvel” is soaring to a heroic opening weekend of $153 million in North America at 4,310 sites, reviving what had been a slumbering 2019 box office.

“Captain Marvel” took in $302 million internationally, giving it an estimated global opening weekend of $455 million — the sixth highest global debut of all time.

The 21st installment of Disney’s Marvel Cinematic Universe propelled total domestic moviegoing to $210 million — nearly $70 million above the same frame last year. It was the first weekend of 2019 to outperform the same frame of 2018.

“Captain Marvel” will wind up with the 18th biggest domestic opening weekend of all time. Disney’s “Rogue One: A Star Wars Story” has the 17th-highest launch frame with $155.1 million in 2016. It will be the biggest opening title since “Incredibles 2” launched with $182 million in June and should post the best start for a standalone superhero film since Marvel’s “Black Panther” launched with $202 million in 2018.

“Captain Marvel” performed well above studio projections, which had pegged the film at $125 million. It took in nearly triple what had been the biggest opener of the year with “How to Train Your Dragon: The Hidden World” at $55 million on Feb. 22-24.

Total domestic box office for 2019, which had plunged by 27% before the weekend, is now down 21% at $1.79 billion, according to Comscore’s Paul Dergarabedian, senior media analyst.

“Thankfully ‘Captain Marvel’s’ superpowers extend to the box office realm and as expected provided a much-needed box office boost that the 2019 box office has been waiting for with a positively out of this world debut,” he said. “The allure and power of the superhero genre is as powerful as ever and just what blockbuster starved audiences have been waiting for in the form of a perfectly cast Brie Larson in this most powerful role.”

“Captain Marvel” landed an A CinemaScore. Comscore/Screen Engine’s PostTrak survey of audiences resulted in an 81% total positive score with a strong 66% of audiences saying they would “definitely recommend” the film. The film earned $14.1 million from 411 Imax locations and nine of the top 10 theaters were Imax locations.

Universal’s third weekend of “How to Train Your Dragon: The Hidden World” led the rest of the pack with $14.7 million at 4,402 locations for a 17-day domestic total of $119.7 million. The second weekend of “Tyler Perry’s A Madea Family Funeral” followed with $12.1 million at 2,442 venues.

The fifth weekend of Warner Bros.’ “The Lego Movie 2: The Second Part” finished a distant fourth with $3.8 million at 2,930 locations to lift the total domestic gross to $97 million. Fox’s fourth weekend of “Alita: Battle Angel” followed in fifth with $3.2 million at 2,372 sites to push the 24-day total past $78 million. “Alita” carries a pricey $170 million budget.

Universal’s 17th weekend of “Green Book” came in sixth place with $2.5 million at 2,097 venues, lifting the Best Picture winner past $80 million domestically. The road-trip drama is more than $16 million ahead of the final domestic gross of last year’s Best Picture winner, “The Shape of Water.”

New Line’s fourth frame of “Isn’t It Romantic” finished seventh with $2.4 million at 2,333 locations to push its 24-day total past $44 million. MGM’s fourth weekend of “Fighting With My Family” and Focus Features’ second session of “Greta” were in a close battle for eighth place with $2.2 mllion each.

Neon’s second weekend of its documentary “Apollo 11” cracked the top 10 list with $1.3 million at 405 sites. That was enough to edge Paramount’s fifth frame of Taraji P. Henson’s “What Men Want” with $1.2 million at 1,062 locations, giving the comedy $52 million in a month.