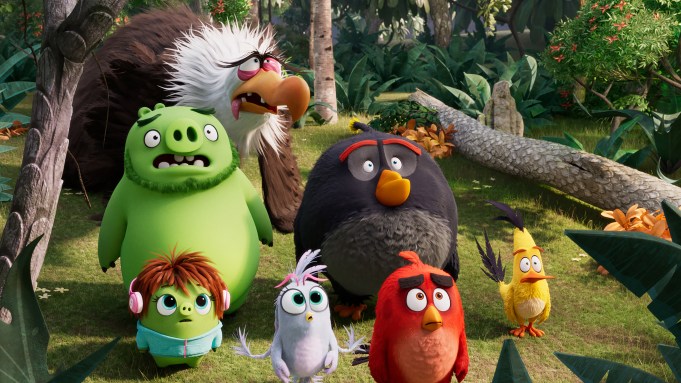 “The Angry Birds Movie 2,” Sony’s animated sequel based on the phone app and video game, collected $2.6 million when it opened on Tuesday.

The follow-up to 2016’s “Angry Birds” got a jump on the weekend and is expected to earn $16 million to $18 million during its fist six days of release. Unless “Angry Birds 2” exceeds expectations, the movie could arrive well below the first film, which debuted with $38 million and ended its theatrical run with $352 million worldwide. On the plus side, “Angry Birds 2” carries a $65 million price tag, slightly less than the first movie’s $73 million budget.

In the sequel, the feathered protagonists team up to save Bird and Piggy Islands after advanced weapons threaten their home. The voice cast includes Jason Sudeikis, Josh Gad, Maya Rudolph, and Leslie Jones.

“The Angry Birds Movie 2” is hardly this weekend’s only new release. On Friday, Universal’s raunchy comedy “Good Boys,” Entertainment Studio’s shark thriller “47 Meters Down: Uncaged,” Warner Bros.’ musical rom-com “Blinded by the Light,” and Annapurna’s adaptation of the book “Where’d You Go, Bernadette” will debut nationwide. The avalanche of new releases means last weekend’s newcomers, including “The Kitchen,” “Scary Stories to Tell in the Dark,” and “Dora and the Lost City of Gold,” could get buried.

“Good Boys” and “47 Meters Down: Uncaged” will likely be vying for first place, with both titles expecting starts in the mid-teens. “Good Boys” stars Jacob Tremblay, Brady Noon, and Keith L. Williams as sixth-graders who find themselves caught up in a series of antics while they prepare for their first kissing party. The latter, a sequel to 2017’s “47 Meters Down,” focuses on four teens who find themselves face-to-face with deadly sharks while scuba diving in a ruined underwater city.

Meanwhile “Blinded by the Light” and “Where’d You Go, Bernadette” are tracking disappointing starts in the single digits. The former, directed by “Bend It Like Beckham” filmmaker Gurinder Chadha, is a coming-of-age story about a British Pakistani teen who sees life in a new light after discovering the music of Bruce Springsteen. Richard Linklater helmed “Where’d You Go, Bernadette,” based on the best-selling novel by Maria Semple. Cate Blanchett stars as Bernadette, a mom who curiously goes missing just before her family goes on a big trip.