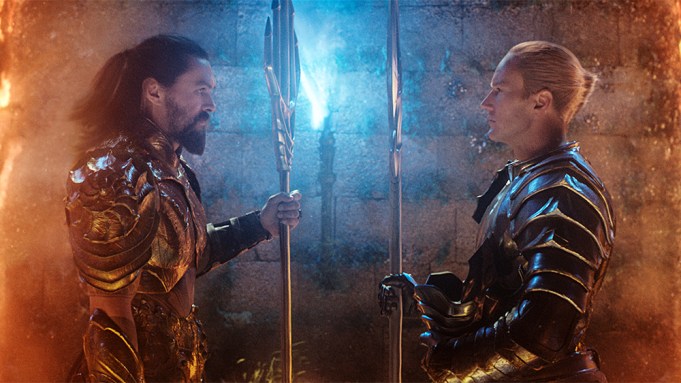 Leave it to Jason Momoa and his perfectly tousled man bun to dominate box office charts for the third straight weekend. “Aquaman” easily retained its No. 1 spot in North America, pulling in a solid $30 million for a domestic haul of $259 million.

The DC superhero adventure directed by James Wan has now crossed $940 million worldwide, making it Warner Bros. biggest comic-book title since “The Dark Knight Rises” amassed over $1 billion globally in 2012. If “Aquaman” continues at this pace, Arthur Curry could give Batman a run for his money. “Aquaman” generated another $56.2 million in foreign markets this weekend, bringing its international total to $681 million. The Atlantean blockbuster has already nabbed the distinction as DC’s highest-grossing title overseas, surpassing the record previously set by “The Dark Knight Rises” with $636 million.

With no new high-profile releases, “Aquaman” didn’t have much competition to maintain its reign in North America. The only newcomer was Sony and Columbia Pictures’ “Escape Room,” a psychological thriller about a group of strangers who get trapped in a deadly (you guessed it) escape room. The PG-13 horror film secured the No. 2 slot with $18 million when it debuted in 2,700 locations. That’s a strong start considering the film only cost $9 million to produce.

“Escape Room” was neck in neck with Disney’s “Mary Poppins Returns” for second place, though Sunday estimates show the latter coming in at No. 3 with $15.8 million during its third weekend of release. “Mary Poppins Returns,” a sequel to the 1964 classic, has earned $138 million at the domestic box office. The movie — starring Emily Blunt and Lin-Manuel Miranda — has been a slow burn in theaters, which is to be expected for a movie-musical. It has collected $119 million internationally and over $250 million globally, though it will need to keep chugging along at multiplexes to justify its $130 million price tag.

Elsewhere in moviegoing, it was holdovers galore. Paramount’s “Bumblebee” and Sony’s “Spider-Man: Into the Spider-Verse” are in a close race for fourth and fifth place. Both titles pulled in roughly $13 million over the three-day frame, so we won’t be able to officially tell who came out on top until final numbers arrive on Monday.

Hailee Steinfeld stars in “Bumblebee,” the “Transformers” origin story that has made $97 million since debuting just before Christmas. Meanwhile, the domestic haul of “Spider-Verse,” an animated flick from Sony’s arsenal of Marvel characters, currently sits at a robust $133.8 million.

With the Golden Globes on Sunday, Annapurna’s “Vice” could get a box office boost if Adam McKay’s scathing Dick Cheney biopic is able to walk away with some trophies. The political movie has seriously divided critics, but the Hollywood Foreign Press Association was high on “Vice” and handed it a leading six nominations. For now, the $60 million film earned $5.8 million this weekend, taking its domestic tally to $29.7 million.

Fellow Christmas Day release, Sony’s “Holmes & Watson,” continues to struggle. Despite featuring the comedic duo of Will Ferrell and John C. Reilly, the movie made $3.4 million over the three-day stretch for a tepid North American total of $28.4 million. Overseas, the buddy comedy based on the famed detective and his trustee sidekick has made a dismal $7 million, bringing its worldwide bounty to $35 million. It holds an 8% average on Rotten Tomatoes, so it might not be a mystery if “Holmes & Watson” fails to recoup its $40 million budget.

At the specialty box office, Annapurna’s “Destroyer” pulled in $110,012 from six venues, ranking as the best screen average of the weekend with $18,335 per location. Nicole Kidman stars in the thriller, which has made $260,000 during its platform release.

Sony Pictures Classics’ “Stan and Ollie” also boasted a promising screen average with $12,022 from eight screens for a weekend haul of $96,173. Reilly’s performance as Oliver Hardy, alongside Steve Coogan as Stan Laurel, has drawn significantly better reviews (and a Globes nod) compared to “Holmes & Watson.” The comedic drama has grossed $243,159.

Focus Features’ “On the Basis of Sex” pocketed $1.6 million when it expanded to 112 venues this weekend. The Ruth Bader Ginsburg biopic starring Felicity Jones has earned $3.7 million.

Awards hopeful “If Beale Street Could Talk,” written and directed by Barry Jenkins, brought in $1.8 million from 335 theaters for a domestic tally of $4.4 million.

Rounding out the weekend is Amazon’s “Cold War,” which played in six theaters and earned $93,000. Polish filmmaker Paweł Pawlikowski directed the drama, which is Poland’s foreign language entry at this year’s Oscars. It has made $274,354 in its limited release.

January is a traditionally slow month at the box office. Even so, 2019 is already pacing 16.5% behind the same weekend last year when “Jumanji: Welcome to the Jungle” held the domestic crown, according to Comscore. There’s no need for doom and gloom just yet. The Martin Luther King Jr. holiday should pump some life back into theaters when “Glass,” a sequel to both “Unbreakable” and “Split,” debuts on Jan. 19. Early estimates show the M. Night Shyamalan thriller is projected to open to between $50 million and $70 million. Until then, it’s Jason Momoa’s world, and we’re just living in it.