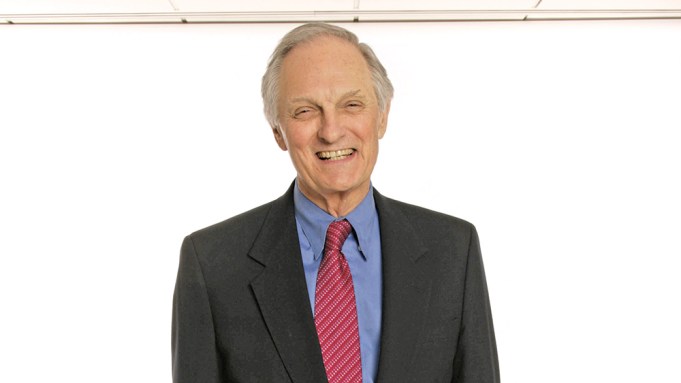 Alan Alda is set to receive the Screen Actors Guild’s Life Achievement Award during the 25th Annual SAG Awards on Jan. 27 from Tom Hanks: a canny tribute to career excellence passing between one generation’s most beloved actor and the next. But unlike Hanks, whose off-screen goodness is repeatedly and almost without exception reinforced in the roles he chooses, Alda insists that he devoted considerable professional effort throughout his career to testing audience’s sympathies, even if the effort proved unsuccessful in challenging the likability that’s become synonymous with his name.

“I’ve played people who were either villains or they weren’t totally nice guys at least half the time through my life, and every time I play one somebody says, ‘boy, you’ve never done that before,’” Alda says. “So I must have covered America with the slime of my amiability a little more than I thought I would.”

At 82, Alda has experienced the kinds of accomplishments that seem almost unimaginable even to Oscar winners or stars of billion-dollar-grossing blockbusters: he starred in all 251 episodes of the CBS television series “MASH,” wrote 19 of them and directed 32 — including the finale, which remains today the single most-watched episode of an American broadcast network television series. That show alone netted him five Emmys, six Golden Globes and three DGA awards.

He directed four feature films, including “The Four Seasons,” which earned him Globe nominations for lead actor and screenplay. And throughout his career he has worked with the likes of Steven Spielberg, Martin Scorsese, Woody Allen and Mike Nichols.

But then again, there’s plenty of time to rack up those sorts of accomplishments when you’ve literally been acting your entire life.

“I was carried on stage when I was 6 months old,” he says. “Burlesque comics that my father worked with played gags on each other, at one point hiding me in a safe in a sketch where a guy was trying to open the safe and I popped out.”

Inheriting the show-business bug from his father, respected Broadway and film actor Robert Alda, Alda admits that it took him a few years to get comfortable as a performer, but immediately gravitated to storytelling. “I wanted to be a writer from the time I was 8 years old. And then later in life, when I was 9, I wanted to be an actor. “I would watch him from the wings all during my childhood, so I grew up thinking that was all there was.”

Alda’s personal breakthrough as an actor came at 9, during a performance with his father at the Hollywood Canteen. “I was shaking like a leaf from nervousness,” he recalls. “When I came out on stage, I could feel the warmth of the spotlight and I started to relax — and a few seconds later I got my first laugh.
There must have been a thousand people in uniform laughing at this 9-year-old kid and I felt such a surge of power like I’d never felt before.”

An itinerant upbringing taught him not to take success for granted. “I never was in one school for very long, so I was constantly having to adjust to a new set of people. It fortified my understanding that the way to handle problems was with humor, which didn’t work out so well at the first school I tried. Every time I tried to be funny, they tried to beat me up. A simple ‘boo’ would have been sufficient.”

Armed with the lessons of various mentors and instructors, he slowly transitioned from stage to screen, and eventually landed the role of Benjamin Franklin “Hawkeye” Pierce in the 1972-83 TV adaptation of Robert Altman’s feature “MASH.” But not only did Alda not predict — or anticipate — the show’s runaway popularity, he initially hedged his bets about its longevity to ensure that his children would enjoy the stability during their adolescence that he never experienced.

“I assumed that we would have to move to California if it lasted a long time, and I didn’t want to impose that on my kids, who were just entering puberty,” he says. “But my wife suggested maybe we could solve it with travel, and I would fly back every weekend during those months.”

“MASH” ran for 11 seasons. “It actually could have gone on longer,” he notes. “But I think it was important not to end the show when we were fading, but when we were doing our best work.”

Although he remains enormously proud of the work he did on the show, he knew immediately that it marked a career peak that would be virtually impossible to reach again.

“If it was just a nice success, then I would have probably felt I had to repeat it or top it,” he says. “But at a certain point I was freed from worrying about ever experiencing that success again, because that was a success that comes along not once in a lifetime but once in several lifetimes.”

Simultaneously, Alda worked off-screen advancing a variety of social causes, including the women’s movement. He campaigned for the Equal Rights Amendment so fervently, in fact, that in 1976 the Boston Globe dubbed him “the quintessential Honorary Woman.”

“I spent all my time when I wasn’t in front of a camera traveling around the country, rallying people, lobbying the legislatures and that kind of thing,” he says. “But when that was over, I wanted to spend my time on what I knew how to do best, which was my art, and I would make a contribution that way, but not a political contribution, an artistic one.”

Unburdened by professional obligation or personal expectation, Alda collaborated with world-class filmmakers, took roles that challenged him, and developed projects that both fulfilled him creatively and in many cases served a cultural need.

“You don’t have to think you have an obligation or there’s something you’ve left undone,” Alda notes. “So I do things that interest me and sometimes they work out, sometimes they don’t, but I’m free to explore.”
That unplanned route — and a growing fascination in science and technology — led him to a 14-year gig as host of PBS’ “Scientific American Frontiers,” and more recently, a podcast in which he talks to experts in a variety of fields about connecting with others.

“I’m having one of the best times I’ve ever had doing ‘Clear+Vivid,’ ” he says. “I talk to wonderfully interesting, funny people about communicating and relating. It’s a way of offering what I’ve learned as an artist to help fill a social need.”

In addition to serving as creator, head writer and host of “Clear+ Vivid,” in which he recently spoke with Dr. Ruth Westheimer, Alda is staying as busy as ever, having joined the sixth season of “Ray Donovan” and completed a small role in Noah Baumbach’s yet-to-be-titled new film.

But reflecting on a career that continues to thrive even as it deservedly earns him SAG’s Life Achievement Award, Alda thrills at the prospect of continuing to do as much learning at 82 as teaching.
“I really want to know more about everything. I want to know how things work, like how people work, how we can do things better. I’m constantly thinking.

“All during the day, while I’m pouring a cup of tea, I’m wondering, is this the best way I can do it? I wonder if I did that first instead of this? It’s a little insane, but I’m curious.”