Continue to Variety SKIP AD
You will be redirected back to your article in seconds
Dec 11, 2019 7:42am PT

‘Once Upon a Time,’ ‘Bombshell,’ ‘Irishman’ Top SAG Awards Nominations 2020 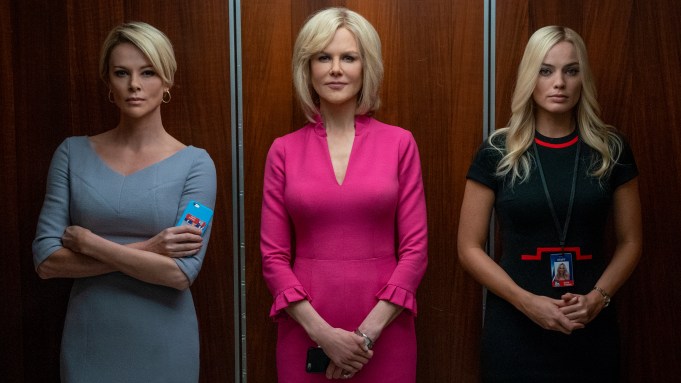 “Once Upon a Time in Hollywood,” “Bombshell,” and “The Irishman” led the nominations for the 2020 Screen Actors Guild Awards, picking up four nods apiece. All three films will compete for the top prize, best ensemble, along with “Parasite” and “Jojo Rabbit.”

Quentin Tarantino’s “Once Upon a Time in Hollywood” is an ode to the golden age of movies, while “Bombshell,” a look at the Fox News employees who exposed Roger Ailes’ sexual harassment, tells a darker story about the media business. “The Irishman,” an epic about the intersection of organized crime and the labor movement, is directed by Martin Scorsese, one of the fiercest defenders of the theatrical experience. However, in order to get the ambitious, $175 million movie made, Scorsese allied himself with Netflix, the streaming service that’s disrupting the movie business.

“The Marvelous Mrs. Maisel” was the most honored television show, nabbing four nominations, including one for best ensemble in a comedy series. It was followed by “The Crown,” “Fleabag” “Game of Thrones,” “The Kominsky Method,” “The Morning Show,” and “Stranger Things,” all with three nods. “Mrs. Maisel” looks a female comic’s struggles to break into the business in the 1960s and has been a major success for Amazon Studios as the tech giant tries to gain a foothold in the content space.

Other comedy series ensemble nominees include “Fleabag,” “Barry,” “The Kominsky Method,” and “Schitt’s Creek.” The best drama series ensemble category will be a race between “Big Little Lies,” “Game of Thrones,” “The Crown,” “The Handmaid’s Tale,” and “Stranger Things.”

The guild prizes are handed out by the main union for performers and are often seen as an important precursor to the Oscars. There tends to be greater overlap between the union and the members of the Academy of Motion Picture Arts and Sciences, the organization behind the Academy Awards, than there is with other awards shows. The SAG Awards honor the best of both film and television. Click here for a complete list of nominations.

On the film side of the ledger, lead actor is a race between Joaquin Phoenix for his villainous turn in “Joker,” Adam Driver for his work as a man in the throes of a painful breakup in “Marriage Story,” Taron Egerton for channeling Elton John in “Rocketman,” Leonardo DiCaprio for his performance as a washed up television star in “Once Upon a Time in Hollywood,” and Christian Bale for tapping into the mind of a relentless race car driver in “Ford v Ferrari.” Phoenix and Driver are both considered to be the top contenders for the prize.

Lead actress will be a likely be contest between Renée Zellweger (“Judy”) and Charlize Theron (“Bombshell”), nominated for their respective shapeshifting turns as Judy Garland and Megyn Kelly. Zellweger is a previous winner for “Cold Mountain” and “Chicago”; Theron took the prize for “Monster.” Other nominees include Scarlett Johansson, playing one half of a divorcing couple in “Marriage Story”; Cynthia Erivo, portraying a American abolitionist Harriet Tubman in “Harriet”; and Lupita Nyong’o, doing double-duty as a loving mother and her evil doppelgänger in “Us.” Johansson is a multiple nominee, having also picked up a nod in the supporting actress category for her work in “Jojo Rabbit.”

Awards watchers closely scrutinize SAG for clues about which performers are destined to bag an Oscar. However, the awards’ predictive prowess proved to be overstated last year. Rami Malek (“Bohemian Rhapsody”) and Mahershala Ali (“Green Book”) picked up SAG awards on their way to Oscar glory, but the Academy honored Regina King (“If Beale Street Could Talk”) and Olivia Colman (“The Favourite”) over SAG victors Glenn Close (“The Wife”) and Emily Blunt (“A Quiet Place”).

There were some notable omissions among this year’s group of film nominees. “The Two Popes,” Netflix’s acclaimed look at the relationship between Pope Benedict and Pope Francis, had been expected to score nominations for Jonathan Pryce and Anthony Hopkins, but was instead shut out. Saoirse Ronan was considered to be a virtual lock for a lead actress nomination for her feisty turn in “Little Women,” but was overlooked. And Kathy Bates is considered to be a leading supporting actress contender for her work in “Richard Jewell.” Her snub is likely the result of a snafu that saw Warner Bros. enter the actress in the lead rather than supporting category.

“Marriage Story” had a good morning, picking up three nominations for Driver, Johansson, and Laura Dern (recognized in the supporting actress category), but failed to nab a best ensemble prize, something of a shock for a film that relies so heavily on its acting turns.

In the television realm, two cast-members from Apple’s “The Morning Show,” Steve Carell and Billy Crudup, picked up lead actor in a drama nominations. That strong showing was something of a surprise given the critical drubbing the series has suffered. The two men will compete against Sterling K. Brown (“This Is Us”), Peter Dinklage (“Game of Thrones”), and David Harbour (“Stranger Things”) for the honor.

Sandra Oh, last year’s winner for lead actress in a drama for “Killing Eve,” failed to make the cut this time even as her co-star Jodie Comer was among the five women nominated. She will face off against Jennifer Aniston (“The Morning Show”), Elisabeth Moss (“The Handmaid’s Tale), and two members of “The Crown” ensemble Helena Bonham Carter and Olivia Colman.

Lead comedy actor will be a race between “The Kominsky Method” tag team of Alan Arkin and Michael Douglas, along with reigning champion Tony Shalhoub (“The Marvelous Mrs. Maisel”). Bill Hader (“Barry”) and Andrew Scott (“Fleabag”) round out the category.

Rachel Brosnahan, who previously captured lead actress in a comedy honors for her wise-cracking turn on “The Marvelous Mrs. Maisel,” is once again nominated. Her competition consists of Cristina Applegate (“Dead to Me”), Catherine O’Hara (“Schitt’s Creek”), Phoebe Waller-Bridge (“Fleabag”), and Alex Borstein, a co-star on “Maisel.”

While the film portion of the SAG awards tends to be the more rigorously analyzed, falling as it does in the height of Oscar season, there were some stunning TV upsets. Notably, HBO’s “Succession” was completely overlooked despite becoming a water-cooler breakout, and Merritt Wever and Kaitlyn Dever were left out of the TV mini-series acting category even as they scored rapturous reviews.

The 26th annual Screen Actors Guild Awards will air live on TNT and TBS on Jan. 19 at 8pm ET.