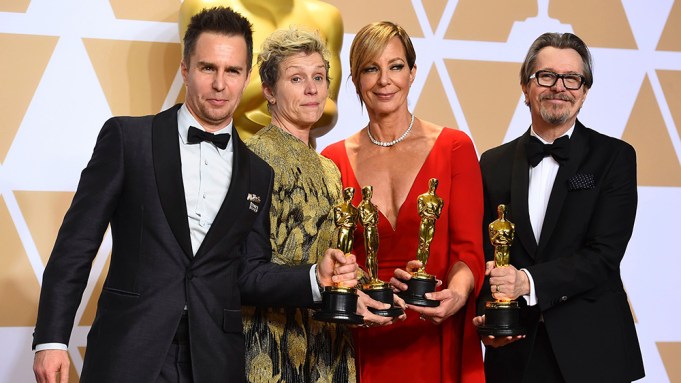 The producers of the Oscars are hellbent on delivering a show that’s no longer than three hours. With any eye towards tightening the running time, producers have decided to relegate certain categories such as best cinematography to commercial breaks. They’ve told winners that they have 90 seconds from the moment their name is called to reach the stage and complete their speech.

That may be welcome news to viewers who grow weary of listening to movie stars thank their agents and publicists or who reach for the remote after the umpteenth montage honoring the magic of moviegoing. It’s unclear, however, if shorter running times for awards shows actually correlate with stronger ratings. And make no mistake, these “improvements” are all about goosing the ratings for an Oscar broadcast in free-fall.

Last year’s broadcast, clocking in at 3 hours, and 53 minutes, was the least-watched in modern history with 26.5 million viewers tuning in to see “The Shape of Water” crowned the year’s best film. However, that broadcast was only six minutes longer than the most-watched Oscar telecast, the 1998 edition that saw a record 57 million viewers tune in. Of course, it helped that “Titanic,” a box office phenomenon with few parallels, swept the major categories that year. James Cameron’s romantic drama with Kate Winslet and Leonardo DiCaprio grossed $2.2 billion globally, whereas “The Shape of Water,” a love story between Sally Hawkins and a merman, netted a much more modest $195.2 million worldwide.

Of course, a lot has changed since Cameron declared himself “king of the world” during his Oscar triumph. Awards shows and live programming in general have suffered a ratings dive. The 2018 Emmys hit a ratings low last September at 10.2 million total viewers; this week’s Grammy telecast delivered a slight gain from 2018 in total viewers (20 million) but reached a nadir in viewership among adults 18-49. Away from the world of kudo-fests, this month’s Super Bowl (100.7 million) was the least watched title game in a decade. The audience for live television appears to be fracturing thanks to the rise of on-demand and streaming platforms, and the Oscars aren’t alone in seeing their audience shrink.

So let’s look back at running time and ratings when it comes to Oscar broadcasts, because that appears to be an obsession of ABC and producers Donna Gigliotti and Glenn Weiss. The highest-rated broadcast of the last decade was in 2014 when Ellen DeGeneres hosted and “12 Years a Slave” took home top honors. That show was seen by 43.74 million households and lasted for 3 hours and 34 minutes. It was a more concise program than last year’s broadcast, but it is hardly the shortest Oscar show to air over the past 10 years. That distinction goes to the 2012 broadcast, which handed out awards in a relatively brisk 3 hours and 14 minutes. However, its 39.46 million total viewers puts it in the middle of the pack in terms of ratings.

Historically, Oscar viewers didn’t seem to mind more larded broadcasts. The 2002 ceremony lasted a butt-numbing 4 hours and 23 minutes, making it the longest show in Oscar history. Some 40.54 million viewers watched that broadcast, a figure that ABC would kill to replicate this year.

To be fair, there’s some data on the side of ABC. In the days following the low-rated 2018 broadcast, executives from the network reportedly sat down with the Academy of Motion Picture Arts & Sciences and “at a granular level” showed them precise moments during the telecast when viewers tuned out. The only issue with this logic is that people have to tune into the broadcast to begin with, and it’s unlikely that most viewers are so tightly scheduled that they will only turn on the 2019 Academy Awards if they are given some assurance that the show won’t go over three hours.

At least there’s some data behind the decision to keep things shorter. There’s little empirical evidence behind other “tweaks” to this year’s broadcast, such as the decision to forgo a host in favor of more A-list presenters. Presumably, the idea is that people decide to watch an awards show based on whether or not Daniel Craig is handing out an Oscar for best makeup. Oh wait, that’s one of the statues that will be announced during a commercial break.

Here’s a look at some of the recent Oscar broadcasts, their running time, and their ratings: