Continue to Variety SKIP AD
You will be redirected back to your article in seconds
Dec 2, 2019 9:11pm PT 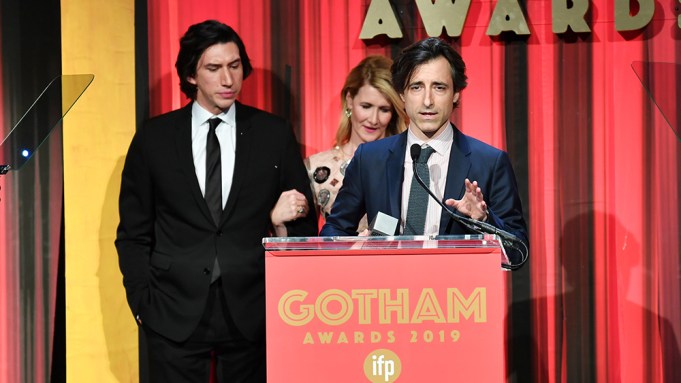 “Marriage Story” just took another giant step down the aisle to the Oscars.

While the Gotham Awards aren’t always a precursor of what’s to come at the Academy Awards, Monday night’s “Marriage Story” sweep of four wins at the Independent Filmmakers Project’s annual awards gala should provide even more momentum for the Netflix title.

“Marriage Story” took home the night’s biggest prize, best feature, after director-writer Noah Baumbach earned best screenplay and Adam Driver was named best actor. The film also captured the audience award. It seemed like an even bigger night for the divorce drama because cast member Laura Dern, who is a favorite to be nominated for the supporting actress Oscar for her work as a ruthless divorce attorney in “Marriage Story,” was one of the evening’s honorees to receive an individual tribute.

If “Marriage Story” continues this trajectory, it could finally land a best picture Oscar for Netflix. Alfonso Cuarón picked up the Oscars for best director and foreign language film last year for “Roma,” but fell short of best picture gold when “Green Book” snagged the win.

“Moonlight” and “Spotlight” are two of the most recent films to win both the Gotham feature prize as well as the Oscar for best pic.

Netflix was showered with love from several presenters for its recent deal to keep New York City’s beloved Paris Theatre open. Dern compared the freedom she said filmmakers have with the way United Artists treated its talent back in the old days of Hollywood.

Awkwafina may have been shut out of an Indie Spirit nomination for her dramatic turn in “The Farewell,” but she scooped up the Gotham’s best actress award, beating out competitors, including veterans Alfre Woodard (“Clemency”) and Mary Kay Place (“Diane”) as well as Elisabeth Moss (“Her Smell”) and Florence Pugh (“Midsommar”).

The Gotham wins could also help “Marriage Story” and “The Farewell” gain support for Golden Globe noms. Nomination ballots are due by Friday, Dec. 6 with nominations announced on Monday, Dec. 9. There’s also SAG nominations coming up, with ballots due Dec. 9 and nominees announced Dec. 11.