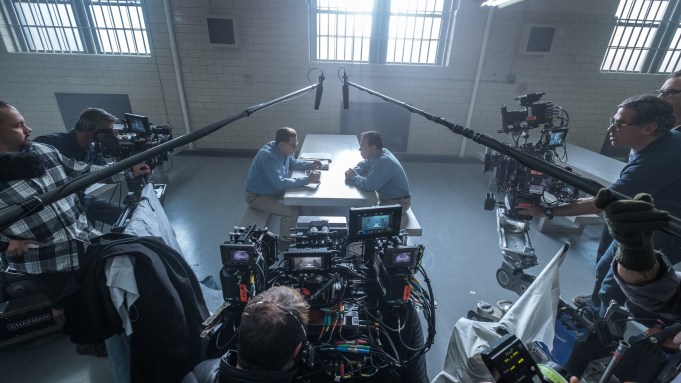 At first glance, Rodrigo Prieto’s job as cinematographer on Martin Scorsese’s “The Irishman” seems complicated. But if you dig deeper, you find out it’s even harder than you’d imagined.

In the video, he offers a crash course in some of his solutions, including the “three-headed monster” of three attached cameras to shoot the scenes where the actors will be de-aged. He also addresses the different formats (i.e., film stock or digital) used to denote the passage of time in the 50-year saga.

In conversation with Variety, Prieto also talked about the rigorous shooting schedule — 300 scenes in 108 days — and his solutions to some of the other challenges, including the numerous scenes in cars.

“The car interiors were all shot in the studio,” he smiles. “I had to create lighting to make it look like it was outside; we lit the car scenes with huge LED panels, like Jumbotrons. We fed onto those screens the images created by the second unit, where they had nine cameras filming around one car, all captured from every angle.

“We used one screen as a background instead of a green screen; with the others, we lit the actors’ faces, so they are literally being lit and shaded by the landscape and buildings passing by. I found that exciting, making it look like it all shot on the road — letting the audience feel that they’re there. That’s part of the make-believe of filmmaking.”

There were also multiple locations in nightclubs and public places that needed to be distinct.

“In terms of the restaurants and bars, I went off Scorsese’s memories of these type of places. He didn’t go to the actual places mentioned (in the Charles Brandt book, “I Heard You Paint Houses” and the script by Steve Zaillian) but he went to places like that. For a restaurant like Villa Roma, he remembered low-wattage bulbs and the amber color. He listened to men talk, where they sat and the way they behaved. He also remembered the color of the light, as opposed to other restaurants.

“For example, with places like Umberto’s Clam House, he described the white lights. So I used fluorescent, cyan-colored top light. With Umberto’s Clam House, I used spotlights to create hot spots of bright white light. I used Lekos, which are used in the theater, because they’re potent and directional. People are smoking so you have shafts of light that seem to be natural but are enhanced because of the drama of the moment.

“Umberto’s Clam House doesn’t exist in its old location, so we had to reproduce the exterior and created part of the facade; but the interior was impossible to do there, so we had to put a blue-screen in the door; when the camera goes into the place, that second part was shot in a studio. You try to make it seem natural and seamless, to make it look like one shot.”

The video shows the “three-headed monster,” without much explanation. But Prieto told Variety that the main camera captures the scene; the two “witness cameras” project infrared light onto the actors, to record every facial muscle movement. That information was conveyed to a computer, to make sure that the de-aged actors are giving the exact same performance that they did on the set.