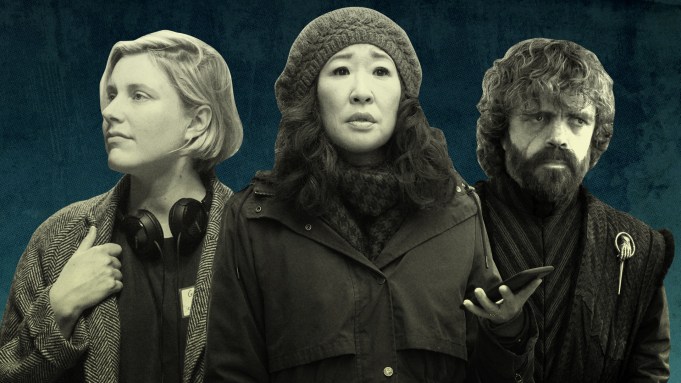 As the first televised awards show of the year, the Golden Globes are have always been key to building — or destroying — momentum on the long road to the Oscars and Emmys.

This year on the film side, the biggest benefactor of Globes buzz is “Marriage Story,” Noah Baumbach’s drama about a New York couple undergoing a painful divorce, which leads all films with six nominations. Martin Scorsese’s “The Irishman” and Quentin Tarantino’s “Once Upon a Time in Hollywood” follow with five nominations apiece.

On the television side, HBO’s “Chernobyl” and Netflix’s “The Crown” and “Unbelievable” had a strong showing, with four nominations per show. And Apple TV Plus, new to the awards race, got some love with three nods for “The Morning Show,” including recognition for stars Jennifer Aniston and Reese Witherspoon.

The Golden Globes are decided by the Hollywood Foreign Press Association, an organization made up of about 100 journalists. See the full nominations list here.

Here, Variety breaks down the 21 biggest snubs and surprises at the 2020 Golden Globes, which will air on Jan. 5.

SNUB: Adam Sandler, “Uncut Gems”
Sandler has been building momentum for his career-best performance in the Safdie brothers’ movie. His last — and only — Golden Globe nomination was in 2003 for “Punch-Drunk Love.” But the HFPA made a last-minute determination that “Uncut Gems” would be considered a drama, not a comedy, and the best actor race there proved too competitive. There’s still a chance he could rebound at the Oscars due to the preferential balloting system.

SNUB: Greta Gerwig, “Little Women”
In the 77-year-history of the Golden Globes, only five women have been nominated for best director. Two years ago, Greta Gerwig was snubbed by the Hollywood Foreign Press for “Lady Bird” (although she eventually received a directing Oscar nomination). This year, they overlooked her for “Little Women.” And instead, in a banner year for female directors at the movies, the Globes once again nominated five men in the directing category: Martin Scorsese (“The Irishman”), Quentin Tarantino (“Once Upon a Time in Hollywood”), Bong Joon-ho (“Parasite”), Sam Mendes (“1917”) and Todd Phillips (“Joker”).

SNUB: Lupita Nyong’o, “Us”
Jordan Peele’s “Us” was one of the biggest box office hits of the year, carried by Nyong’o’s dual performances as a mother trying to save her family and her clone. She recently picked up the New York Film Critics Award for best actress, but the HFPA didn’t honor her in the drama category with Cynthia Erivo (“Harriet”), Scarlett Johansson (“Marriage Story”), Saoirse Ronan (“Little Women”), Charlize Theron (“Bombshell”) and Renee Zellweger (“Judy”).

SNUB: Shia LaBeouf, “Honey Boy”
LaBeouf delivers perhaps his strongest performance playing a character inspired by his own father in “Honey Boy.” But the movie, a critical darling that sold at Sundance to Amazon Studios, didn’t receive any nominations at the Golden Globes.

SNUB: “Cats”
The Hollywood Foreign Press Association loves musicals so much, they once nominated “Burlesque” for best picture. But “Cats,” which has been plagued by bad buzz, didn’t win over this group. The organization, which was the first to see the big-screen adaptation of Andrew Lloyd Weber’s stage hit, only granted the film with a single nomination: best song for Taylor Swift and Lloyd Weber’s “Beautiful Ghosts.” Not a single member of its cast — from Jennifer Hudson to Ian McKellen or Jason Derulo — was nominated.

SNUB: George MacKay, “1917”
Sam Mendes’ battlefield epic was a late entry into the awards season, but it still dazzled critics with its one-take cinematography set during a critical mission in World War I. While “1917” managed to land nominations for best picture, director and score, its lead actor — who carries every scene — wasn’t recognized. The male acting field is just too crowded this year, and MacKay isn’t a household name yet, a quality that matters at the celebrity-friendly Globes.

SNUB: “When They See Us”
Ava DuVernay’s harrowing four-part look at the 1989 Central Park jogger case received critical acclaim when it launched on Netflix in May — but it appears the members of the HFPA were not among those heaping the praise, as the limited series was shut out completely. Not even those performers who achieved Emmy nominations (or wins, in the case of Jharrel Jerome) cracked the ballot this time.

SNUB: “Veep”
The final season of a once-critical darling officially went out with a whimper, as after losing its major categories at the Emmys, it saw no Golden Globes love — not even for comedy queen Julia Louis-Dreyfus.

SNUB: Zendaya, “Euphoria”
The Hollywood Foreign Press loves spotlighting buzzy performances in new shows, and this HBO series set in high school certainly qualifies as that. But sadly, Zendaya will not be walking the Globes carpet this year as a nominee.

SNUB: Aaron Paul, “El Camino: A Breaking Bad Movie”
Technically, Paul was eligible in both the lead and supporting limited series/TV movie actor races this time, for his performances in Netflix’s “El Camino: A Breaking Bad Movie” and Apple TV Plus’ “Truth Be Told.” While he was not a frontrunner in the latter race, his return to the tortured Jesse Pinkman turned heads for running the full spectrum of emotions in a two-hour saga.

SNUB: Sandra Oh, “Killing Eve”
Last year’s winner in the lead drama actress race didn’t even place this year, although her co-star (and recent Emmy winner) Jodie Comer did. This is an especially big surprise because she also co-hosted the show last year with Andy Samberg.

SNUB: “Pose”
The FX period piece ballroom culture drama was nominated last year in its first season — a decision the HFPA was celebrated for, since they were the first organization to honor the show in such a big away. But this year, the Globes mostly opted for other second returning series (“HBO’s “Big Little Lies” and “Succession,” Netflix’s “The Crown” and a second consecutive nom for “Killing Eve”). Leading man Billy Porter still scored a nomination.

SNUB: Peter Dinklage, “Game of Thrones”
The final season of “Game of Thrones” received mixed reviews, to put it mildly, and has all-but faded from the zeitgeist. The show’s leading man Kit Harington still snuck onto the Golden Globes ballot one last time, but its supporting actor did not.

SURPRISE: Cate Blanchett, “Where’d You Go Bernadette”
Richard Linklater’s comedy premiered over the summer to mediocre reviews and flopped at the box office. However, the Globes really love Blanchett. This is her 10th Golden Globe nomination, and she’s won three acting statues for “Blue Jasmine,” “I’m Not There” and “Elizabeth.”

SURPRISE: Annette Bening, “The Report”
Although she received strong reviews for playing Senator Dianne Feinstein, has anyone seen “The Report?” Amazon gave the film a small theatrical release, before dropping it on their streaming platform. But Bening managed a surprise showing in the best supporting actress race, making this her ninth Globes nomination.

SURPRISE: Ramy Youssef, “Ramy”
The creator and star of the semi-autobiographical, self-titled “Ramy” on Hulu has clearly earned many fans in the press, breaking into a tough awards race months after his show streamed its first season — and beating out veteran performers such as Ted Danson (“The Good Place”).

SURPRISE: “Catch-22”
Hulu’s limited series adaptation saw no Emmy love earlier this year, but the show itself and its star Christopher Abbott both scored coveted nominations in highly competitive categories, beating out other, newer high-profile projects such as “El Camino: A Breaking Bad Movie” and “Catherine the Great.”