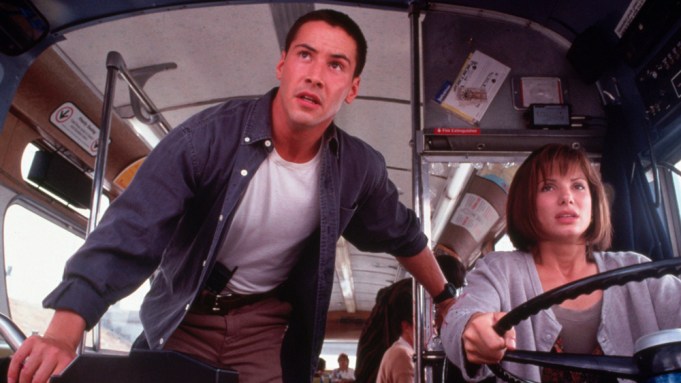 Keanu Reeves and Sandra Bullock won’t be teaming up for another “Speed” anytime soon, but that doesn’t mean one can’t dream, right?

Or at least joke about a possible reunion.

“We’ll be 65!” said Reeves on this week’s episode of “The Big Ticket,” Variety and iHeart’s new film podcast. “I’m driving [or] Annie’s driving because I don’t remember where I am.”

The dialogue? Reeves cracked, “Where are we going? I want ice cream!”

One reunion he’s not joking about these days is the upcoming third installment of “Bill & Ted’s Excellent Adventure.” Reeves and his co-star Alex Winter announced in March that they’re finally going to make the movie, “Bill & Ted Face the Music.”

They were actually approached by the writers about eight years ago. “We worked on some drafts together,” Reeves remembered. But then the project fell apart when “it went through the shenanigans of show business rights and deals and stuff.”

But now it’s ready to go with director Dean Parisot, although it sounds like they could use more financing. “We got some dough — not a lot, not enough,” Reeves said. “We don’t have enough money. … It’s a very ambitious story.”

Reeves can next be seen reprising his role as assassin John Wick in “John Wick: Chapter 3 – Parabellum,” in theaters on Friday. He said it’s “up to the audience” if there will be a fourth “John Wick,” but he also admitted, “I think we have tons of ideas. Even from the first ‘John Wick,’ we were like, ‘What would happen?’”

Hopefully, what would happen is we see more of Halle Berry. The Oscar winner joins the franchise as Sophia, a mysterious woman from John Wick’s past who comes to his aide when a bounty is placed on his head. “Halle Berry is badass,” Reeves gushed. “She comes from badassery. She’s gone to the school of badassery. Or maybe she was a teacher or maybe she was a founding member.”

Another role Reeves would like to revisit? Demon hunter John Constantine from 2005’s “Constantine.” “I just loved that world, too,” he said, “and I love that character.”

Listen to the entire episode of “The Big Ticket” podcast with Reeves below:

Check out “The Big Ticket” on iHeartRadio or wherever your favorite podcasts are found.