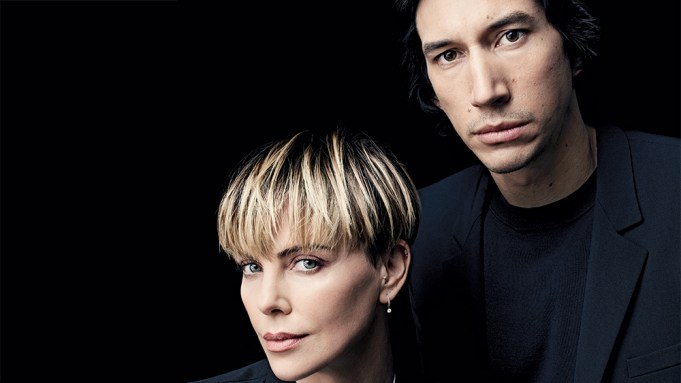 Charlize Theron (“Bombshell”) and Adam Driver (“Marriage Story”) sat down for a chat for “Variety Studio: Actors on Actors.” For more, click here.

Charlize Theron enters this year’s Oscar race with “Bombshell,” a docudrama about the sexual harassment scandal at Fox News. Theron plays a morally complicated Megyn Kelly, suffering the personal consequences of becoming the news. Adam Driver has as complex a claim to our loyalties in “Marriage Story,” in which his character, Charlie, is forced to negotiate a divorce with an actor (Scarlett Johansson) whose viewpoint audience members will sometimes support and sometimes oppose.

Charlize Theron: I don’t know Noah Baumbach’s writing process, but I feel like he has ideas in his head, and they’re there kind of permeating for a long period. Did he bring up the idea of “Marriage Story” to you?

Adam Driver: We’d been talking about “What are we going to do next?” for a while. But he had already been taking notes on this. And we talked about making a “Company” movie — would that work? Because it is kind of an abstract musical, maybe you could make it very cinematic. And the more we’d just start talking about it, the more I’m like, “We should do that.” And then he started meeting with me. It turned into a very organic thing. I think the good thing about working with friends is you get things out of the way faster.

Driver: There’s no worry about “Does this person like me? Am I giving them what they want?” I know — not exactly what he’s going for — but I know what the boundaries are.

Theron: This is a very personal story for Noah, right?

Driver: It is, but it’s kind of a personal thing for everybody. Everybody brought their history to it. I think that’s where it kind of started, and evolved into this thing where it was easy for everyone to make it as personal as possible.

Theron: Is your process always the same? Is the material informing you, or do you just rely fully on your director? What was that process like to find this character?

Driver: Well, for this, it’s so much in the script. And because we had been talking about it for so long — I always feel like sometimes you start a movie, and it’s not until you put on a costume, or you’re a week into shooting already, and you’re like, “OK, now I know what I want to do.” But because we had been working on it for so long, day one I felt everyone had a sense of what it was that we wanted to do. I already know with Noah: It is very much like theater, that the script isn’t changing. But he has designed the schedule to give us a lot of takes and a lot of different ways, because I know there’s no right way to do a scene.

Driver: Yeah, as do I. I love it because it’s like a whole theater run condensed into a day.

Theron: Do you feel like every take, just a part of it changes?

Driver: It’s hard to say. I’m not always the best judge of that, because I think I would have changed something and it’s been like tectonic shifts. But it’s in degrees. Sometimes we just do one because we know this is not right, but maybe it’ll open something else up that we hadn’t thought about. And I think you can only really do that with good writing, too, because good writing is so rich and it does open your imagination. If it’s bad writing, it’s that way.

Driver: We’re militant with what the lines are, but intention is totally open.

Theron: Because there were these amazing moments where I felt like you and Scarlett were finding thoughts and arguments. And I could see you guys finding it, which is crazy to think, because I’m like, “They’ve had this material. They’ve studied it; they’ve worked with this.” And yet you guys are doing it in a way where it feels like I can see you coming to the conclusion, or the argument, or the point, which is so impressive.

Driver: I lucked out on a scene partner. And Noah is giving us a note, or he’ll give her a note that he doesn’t tell me — or the opposite — that we get to do, that when you really trust the people that you are working with, and the day is organized to help you, because as you know, nothing is really set to help you on a film set. Nothing is in place to help you do your job.

Theron: You have a moment with Scarlett — it’s gut-wrenching. You say that you’ve imagined her getting an illness, and then she dies. And in that moment, which is so raw, because it’s completely relatable — we can all relate to that, right? And the shame after we say that. But in that moment, I literally in seconds experienced hating you, loathing you. And by the time you’re down on your knees crying, so connected to you. Is there a part of you as an actor that worries sometimes, where you go, “Is this a moment where somebody’s going to emotionally tap out if I say this?” Or do you look at that as a moment of challenge?

Driver: Loyalty and switching allegiance as an audience is something that Noah and I had talked about, that he had brought up: “I really always wanted to make a movie where your loyalty really switches, where you’re with Scarlett for the first half and you hate that character, and then suddenly you actually start to meet Charlie and have it different.” It’s either truthful, which is not for me to say, and if it’s not, then it was unsuccessful. But being liked is something I don’t think about, or I try not to. Do you put characters away while you’re making them or immediately after it’s over? Or does it still live in you for a while?

Theron: It was hard. It definitely took discipline for me to get to that place. But I feel like now I’ve kind of perfected it. And I do it for many reasons. I do it because if I stay in it for too long, I become incredibly exhausted — emotionally exhausted. That process is very hard for me. … I’m not walking around being Megyn Kelly, or Aileen Wuornos, or any of the characters that I’ve played before. I can switch that off. And I can do it in between too. I don’t speak in the voice the whole time. I know I’m emotionally much braver when I don’t overthink it and I come from a place that’s a little bit more raw.

Driver: Yeah. And speaking of likability, did that come into your thoughts at all?

Theron: I mean, I’ve built a career on playing people that you don’t like.

Driver: It’s not even an idea that makes sense to me.

Theron: For me, it’s a very personal connection that I have to find with the person that I’m playing, that has to make sense. I have to get to a place where I can actually say to myself, “This makes sense to me. I relate. I understand.” Megyn Kelly can be incredibly polarizing. There are things about her that live in the extreme. People either love her or they hate her. And she makes no excuses for that. And so, those are the rules that are handed to me. I have to obey those rules. I have to listen to what she’s saying. There’s a part of her that is so amplified — she comes across really abrasive sometimes, and somewhat aggressive and cold. All of these things that are not necessarily qualities that make you want to hug a person.

But I would be lying if I didn’t say that I can relate to being a woman on a different degree, experiencing those same thoughts about me. I have heard people describe me as cold, or hard, or a b–h. You know what I mean? I can always find that thing that might not be so attractive and bring it back to just human circumstance. That’s a human that I know. The perfect stuff is hard for me to relate to.

Driver: That’s one of my favorite things about other actors, or being an actor, is it forces you to be empathetic. It forces you to exercise that muscle in a way that I think most jobs don’t ask you to.

Theron: Completely. And just when you think you have it down, the universe will kind of remind you that you need to work harder at that. And so this was definitely a reminder for me, at this part of my career, of just going like, “That muscle needs to be worked a little harder.” Megyn Kelly made it really challenging for me.