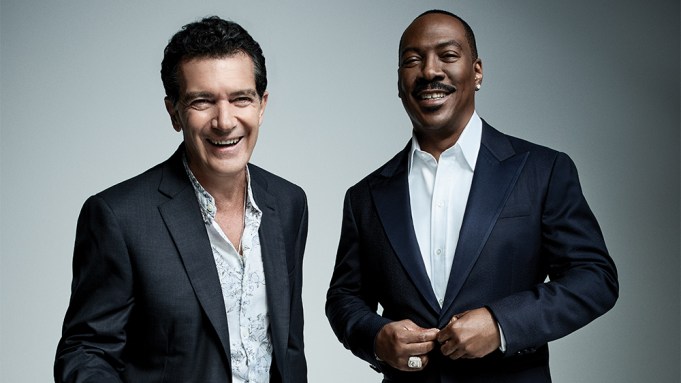 Antonio Banderas (“Pain and Glory”) and Eddie Murphy (“Dolemite Is My Name”) sat down for a chat for “Variety Studio: Actors on Actors.” For more, click here.

Antonio Banderas takes on the role of his career as the director who discovered him in Pedro Almodóvar’s “Pain and Glory,” playing a fictionalized take on Almodóvar sorting through the regrets of middle age. It’s a revelatory performance that won Banderas the top acting prize at Cannes this year. Eddie Murphy also confronts aging in “Dolemite Is My Name,” as Rudy Ray Moore, the real-life would-be comic and actor still waiting for his breakout role. Taking on the persona of Dolemite, Moore rose to cult fame — a trajectory Murphy rides with gleeful relish.

Antonio Banderas: Eddie, were you offered to do this movie?

Eddie Murphy: No, it was my idea. “Dolemite Is My Name” started with me thinking that this guy, Rudy Ray Moore, an inner-city, underground comedian that I followed for years and years, would make a great story.

Banderas: Wow, I had no idea.

Murphy: He’s totally underground. At the end of the picture, you’d see people asking, “This really happened? This guy was a real guy?” I think he made seven pictures.

Banderas: Do you know what is interesting about that? That there were people, underground, with tremendous creativity, with practically no money.

Murphy: No money. And the movies that he made and the records that he made, he financed himself. They were stoner movies, like Fellini or Jodorowsky. When I got older, and I started making movies, he kind of became this hero to me — this guerrilla filmmaker.

Banderas: There’s something romantic about it.

Murphy: When he was in it, it probably wasn’t romantic, but now it is. So, what was it like doing a Pedro Almodóvar movie — and playing him in the movie? That must have been daunting.

Banderas: It was the eighth movie I did with him. I’m playing a character called Salvador Mallo, but it’s based on him. In 1980, when I met him, it was only five years after Franco died. We were living in a dictatorship for 40 years. The arts were very compromised by the regime. You couldn’t do anything that was out of the box at the time.

Banderas: Oh, yeah. In terms of sexuality, politics, social issues, you were very limited. So Pedro Almodóvar came as some kind of fresh water into artistic life.

Murphy: So the mainstream — did they love him?

Banderas: No, no. He started a little bit like —

Banderas: Yeah. He broke all the rules of cinema. People needed to metabolize that. And at the end of these four decades, he proposed to do this movie, that is going back in time, and coming to terms and reconciling with many people that we both knew: actors, lovers, and in his case, his mother.

It has been a very, very interesting trip that came to me at a very specific time of my life. I suffered a heart attack, and when you see death so close, you make different choices. The things that you thought were important are not important anymore. I wouldn’t even say my vocation is an actor. Almodóvar saw that there was something different in me, and he said, “I would love for you to use it in this movie.”

Banderas: I think we create with what we have, with the experiences that we had in our lives, good or bad. I don’t play the trumpet, or paint, or write books. I use myself, my own persona, in order to express things. And when you see death so close, you put a lot of attention to every speck of your life. Every little detail, every second, has to be perfect, because you know that there is an end.

Murphy: It’s scary for me to touch real stuff.

Murphy: One or two times, I’ve had something on screen that was really, really serious, and there was some pain there. It was rooted to something that was real, but I wasn’t making a conscious effort to go touch that and to use it. I had a broken heart, and I’m acting with a broken heart. So the pain comes across, but I’m not doing it on purpose. I think it’s fascinating when actors can actually go and dig around. It would be too much for me, because I’ve seen some actors do it, and after they finish the scene, they’ll be on the side, still crying.

Banderas: I’m not saying it was easy.

Murphy: It didn’t sound easy at all.

Banderas: What I know is that Pedro pushed that side that he saw differently in me. And I knew he was pushing me to go through certain places, in order to obtain certain results. And that was coming from personal experience. You know that something has changed in you, even when you are in front of the camera.

Murphy: It’s beautiful when you see an actor doing that. When you see something that is real. For me, I did a scene, not recently, where my father died and it’s in the scene, and in real life my dad passed away. I thought about it when I was doing the scene, but then it was like, “I’m not touching that.” And I just pretended I was sad, as opposed to letting it really come in me and using it. I felt like I would be naked, like you’re completely and totally vulnerable to it. And then I was like, I’d rather just make a sad face than really cry for real.

Banderass: I’ve been working for 40 years now. You create tools — it’s normal. You create a way of behaving in front of the camera, and that you know is going to work. The interesting thing about us is that we did three movies together [the “Shrek” franchise], but we never worked together. We met each other in promotion in the Cannes Film Festival.

Murphy: Yeah. Three really special movies that will be around after we’re gone.

Murphy: Right now, I’m doing a sequel to a movie I did years ago called “Coming to America.” And it has just been around for years and years in the culture. I don’t know what it is about the movie. Like on Halloween, people dress up as the characters, and people always say lines from that movie to me. I don’t know if there’s ever been a sequel to a movie 30 years afterwards, but we found a way to connect it. And I’m just over the moon with how it’s turned out. I used the same director I used for “Dolemite Is My Name.” What are you doing now?

Banderas: I’m in the middle of what I think is the project of my life. Not so many people know that I come from theater.

Murphy: You own a theater in Spain.

Banderas: Yeah, man. I’ve got to tell you, one of the most unbelievable things I have ever done in my life was just to be on “Saturday Night Live.” Oh, my God. It’s an experience. Exhilarating. I don’t know if I would do it again, actually. It was very scary. But you would do it again?

Murphy: Yeah, I was in the cast, that’s how I got started. I was on the show for two and a half, three years. And I haven’t been back; I hadn’t hosted. And the show’s been on the air for over 40 years now.

Murphy: Yeah. So it’s like this American institution, and they had a 40-year anniversary a few years back, and everybody that was ever on the show was there. It was this really great night. And when I was there, I got this big gushing wave of nostalgia and great feelings and seeing all these other actors that have been on the show, or were on the show with you. And I felt such a strong kinship to everybody — I felt like it was at my old high school or something. And so I decided, this Christmas, I’m going to go back and host the show, and it’s my first time back in 35 years. I’m really excited about doing it.

Banderas: I’m going to be looking for you.