Shia LaBeouf and Kristen Stewart Get Candid About Their Insecurities, Fears and Growing Up on Set 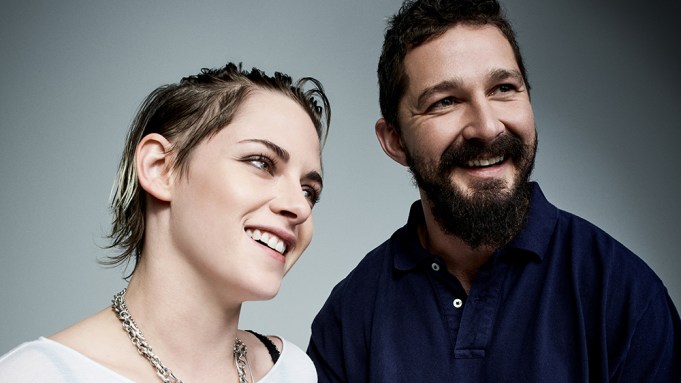 Shia LaBeouf (“Honey Boy”) and Kristen Stewart (“Seberg”) sat down for a chat for “Variety Studio: Actors on Actors.” For more, click here.

Shia LaBeouf wrote and co-stars in “Honey Boy,” his memoir of growing up in Hollywood. His character, based on LaBeouf’s own father, is an alcoholic who steers his son’s acting career and cashes his paychecks. In “Seberg,” Kristen Stewart puts her own memories of movie sets to use, portraying Jean Seberg, the 1960s icon of French New Wave cinema.

Shia LaBeouf: Walking in to “Seberg,” you’re a fan of New Wave. I feel like you watch a lot of —

Kristen Stewart: No. I had seen “Breathless.” In no way is my cinematic knowledge steeped in New Wave cinema.

LaBeouf: What were you into?

Stewart: I watched her movies, and I couldn’t understand how we didn’t know more about her. I genuinely felt really protective of this chick that nobody knew, that everybody thought they knew. There was so much about her that was described in dishonest headlines. I wanted to help her out a little bit.

LaBeouf: Did you know she was haunted before you walked in?

Stewart: Honestly, she’s possessed. When you watch her in a movie, you never know what she’s going to do, and she’s scary.

LaBeouf: On set, you’re alone? You’re not leaning on nobody?

Stewart: No, I lean on people.

LaBeouf: What’s that look like? Do you f–k around in the middle of takes? Do you talk?

Stewart: I’m quieter than you.

LaBeouf: You’ve got to know the power of your quiet too.

Stewart: When I was a kid, I was extremely shy, and not somebody who you would think would want to be an actor. I don’t know how you were as a little kid, because we both did that, and that’s a weird thing to have in common. I had to dig. I was a masochist. I think I’m really talkative now. I talk to f–king everyone now.

LaBeouf: I used to walk around with a pen and a pad, almost litigious, like: “Hey, what’s your name? Oh, cool.” Then I’d write it in a little notepad.

Stewart: Is it because you want people to like you?

LaBeouf: I wanted to seem studious, because I didn’t go to school and I didn’t learn how to do this acting thing.

Stewart: I have this chip right here too.

LaBeouf: What does it do to you?

LaBeouf: If you get around a guy like [Anthony] Mackie [a co-star of “Seberg”] who’s gone to school, he’s got technique. Those people make me very scared.

Stewart: Right. I just watched “Honey Boy.” I literally cannot believe you did that.

Stewart: How long did it take you to come to terms with every day? Obviously, it’s a very personal story. We all try to put our own stuff in stuff, but this is actually your own stuff.

LaBeouf: I had a squad. I was loved on hard. I was leaning on people hard. It was super intimate. We maybe had six people around the camera.

Stewart: Who directed it?

LaBeouf: A woman named Alma Har’el, who is just a straight G.

Stewart: How much do you feel like you were doing an impression versus actually feeling like you could be versions of that person who is your dad?

LaBeouf: My dad blew his nostrils out. I would just keep plugs in all day, which was disgusting.

Stewart: In your nose? That’s gross.

LaBeouf: The first couple of days, I was taking plugs out, putting them back in, taking them out. That started f–king with me, because every time the sound would start up again, I’d be, like, “You’re a clown.” Later in the shoot, we just kept them in and I started losing myself a little bit. How long was your shoot?

Stewart: Six weeks. A lot of daytime, so we couldn’t shoot that long.

LaBeouf: You stay in it?

Stewart: No. I’m hugely relieved every time something is done, and I just run away from set. Time management is such a huge thing with the job. Just the anxiety of not being in control of time is really maddening for me. I can’t sustain stuff, because I just waste it. If I expend something, if something trickles out the wrong time, I am despondently unhappy because I’m, like, “Well, that was just for nothing.”

LaBeouf: Yeah. I know what you’re talking about.

Stewart: I have dreams about it. That’s my work anxiety dream. That all the timing is wrong, or they’re not rolling.

LaBeouf: You shot on film or digital? Because there is a huge difference in time management.

Stewart: We shot on film.

LaBeouf: Ouch. I can’t stand working on film anymore, because digital they just leave it going.

Stewart: Do you just go forever?

LaBeouf: I prefer that. I prefer to just let it run, f–k around, play around and then fall in.

Stewart: I read this script recently that is so precise, and I want to do it really badly, but it scares me because I’m not very precise.

LaBeouf: You’re definitely going to do it.

Stewart: Yeah. I think when I watch you in movies, it’s scary. The same way I was talking about Jean: I have no idea what’s going to happen. Do you prepare a lot?

LaBeouf: Yes. I have no directorial mind. I can’t zoom out. I’m just starting to be a better team player. I’m super obsessed with this one little thing that I have to focus on. I feel like my body has better ideas than my head. I prep really hard, and then it’s almost like dance. I feel like my instinct is better than my ideas, so I try to just not think so much. What does acting give you that the rest of life doesn’t?

Stewart: It’s definitely my initial impulse to want to be close to story-telling, and the circus of it. Even when I read a book, I read out loud. I want to indulge in the thing as much as I can, because there’s something in there that I’m needing. The coolest thing about doing it on set is that you get to do it in the most together way I’ve ever been made to feel. My family is great, but I’ve never felt closer to people, bridging those gaps, than through making movies. What about you?

LaBeouf: I think definitely the most intimate moments of my life happened on set.

Stewart: It sounds really f–ked up, but it’s not at all. It’s beautiful.

Stewart: But this is your life.

LaBeouf: Exactly. This is where things get tricky for me. It isn’t my whole life. I have to get OK with that. It’s usually where things go awry for me is when I’m not on a set. Life gets hard.

Stewart: Do you do anything else?

LaBeouf: This is what I’m trying to develop, trying to grow.

LaBeouf: Maybe I will. I won’t like pottery in life. But I will love pottery on set. I don’t like ice cream in life. But if you give me ice cream on a set, I f–king love ice cream. I think that’s what this does for me. It makes me love things. This job feels like the conduit for love for me. I hold it that sacred.

Stewart: I feel you.

Stewart: Love all the way. I don’t want anyone to be scared ever. I definitely don’t like the fear/intimidation thing.

LaBeouf: Even from a director, though, do you have any scars?

Stewart: No. I’ve worked with wonderful, lovely, talented people, and then some people that weren’t so talented, that were not very nice. I can only do what I can do. I’m trying to think. One dude made me cry on set one day, on the first day of a movie, but that was the last second that I cared about him anymore. I just was like, “I’m alone and you’re terrible.” He made a bad movie.

LaBeouf: This wasn’t to affect a scene? This was just being a dick?

Stewart: I think so. Who knows. What about you? Do you like being afraid on set, and have you worked with people that have made you feel that way?

Stewart: I don’t know. Do we mean the same thing?

LaBeouf: Do you consider yourself one of the talented?

Stewart: I consider myself extremely impulsive and compulsive. Sometimes it works, and sometimes it doesn’t. When people are really proud of their work, I’m like, “Sure, you made it possible for this to occur, I guess. You kind of stood in the right place.”

LaBeouf: Like having a butter-
fly land on your shoulder or
something.