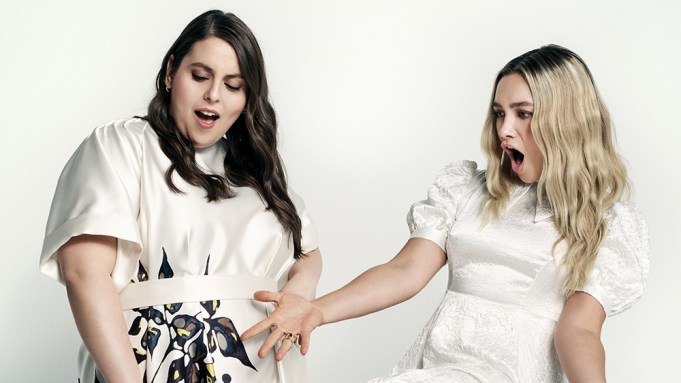 Beanie Feldstein (“Booksmart”) and Florence Pugh (“Little Women”) sat down for a chat for “Variety Studio: Actors on Actors.” For more, click here.

Florence Pugh: How did you find working with Greta Gerwig?

Beanie Feldstein: No, how did you find working with Greta Gerwig? And what about Saoirse?

Pugh: I can talk about Saoirse Ronan —

Feldstein: For the rest of my life.

Pugh: For the rest of my life, all day, every day. Greta Gerwig is the weirdest, bubbliest, most intelligent, colorful burst of life that I’ve had the pleasure of knowing.

Feldstein: She’s a special, special soul. It feels like working with someone that you simultaneously feel so comfortable with but also admire so much. It’s a weird blend of older-sister, mentor-like inspiration all wrapped in one. I feel like she really blended the cast and the crew in such a beautiful way. I think Saoirse does the same thing. I remember on “Lady Bird,” I felt like she was just as much a member of the crew as she was a member of the cast, which was really beautiful.

Pugh: I loved that film so much. What was it like making it?

Feldstein: I was so green, looking back on it. They were so nice to me. I’m older than Saoirse, but I felt like this little, new, wide-eyed deer being, like, “Thanks for letting me come, guys!”

Feldstein: But I’ve heard from Greta that you were not that way on “Little Women,” and that you were so confident — I want to hear all about this.

Pugh: What did she say about me?

Feldstein: She just said that you plopped in the carriage with Meryl Streep, so confident. I’m, like: Tell me your ways.

Pugh: Oh no, my mum’s going to be embarrassed now because I plopped down in a carriage next to Meryl Streep.

Feldstein: What confidence she’s given you.

Pugh: I remember one day Greta came up to me, and she was, like, “Are you just not interested by the fact that you’re sat next to Meryl right now?” I was, like, “No, I am. I’m just trying to not be a complete insane psycho.”

Feldstein: You swung the opposite way.

Pugh:  Some people are really good at being a massive fangirl. I’d cringe myself out if I were to be, like, “I’ve seen everything you’ve ever been in.”

Feldstein: I can’t help it.

Pugh: But that’s you. I would fall in love with you.

I’m going to gush at you about “Little Women” for so long, but I think what’s so incredible is it’s much more massive than “Lady Bird.” It’s a big story that everyone knows. I grew up on “Little Women.” It’s one of my favorite stories in the world. I always hated Amy.

Feldstein: Then, Miss, I watched this film, and I was so blown away by your work. You stood toe-to-toe with Jo, who is Saoirse, who I know is hard to stand toe-to-toe with. You elevated that character to someone that I rooted for, and that I loved. I was on her side and questioning why I was on her side. You could see that they were really mirrors of each other.

Pugh: That’s an amazing compliment. Greta said straight up, “Amy’s going to be more than just what she is in the books in this, because I feel like she hasn’t had her voice.” She is so easily and quickly the bratty sister. It’s so easy to read Jo as being this hero, and everybody wants to be Jo. But I think there’s also something being said for Amy, for a girl that knows, at that time, the wisest thing to do is to richly marry, which is so odd for us, for women now, to go, “Yeah, you go! You marry that rich man!”

I have many questions about “Booksmart.” What was it like to work with Olivia Wilde? Because I am totally in love with her. Kaitlyn [Dever] as well.

Feldstein: I think you and Olivia would be so drawn to each other, because she’s just as fearless as you are in her work on screen and off screen. I felt like once I worked with Greta, I was sort of like, “Where do I go from here?”

Then Olivia came to me with “Booksmart,” and I was, like, “This is it.” Olivia is a remarkable director. She’s so fresh and energetic, and I felt I believed in her so much — but I was really intimidated by my character. I think she’s really tough. I wonder if you felt the same with Amy. She can be a bit intolerable sometimes. So I was really intimidated by that, because I’m used to playing kind of the sweet one. So to play the very, very motivated, strong, fierce one was new to me, and it was Olivia’s confidence in all of us that I think made us all rise to the occasion.

Working with Kaitlyn was truly a special partnership for me in my life. We lived together while we were filming the movie, and so we were just, like, on top of each other all the time — inseparable. We’d brush our teeth together and read lines and eat pancakes.

Pugh: When you first read “Booksmart,” were there other teenage comedies that you took inspiration from?

Feldstein: It’s so interesting, because Kaitlyn and I talk so much about it, that most of the memories we had of female friendships from our childhood were on TV. Like “Lizzie McGuire.” Like “That’s So Raven.”

Feldstein: All the films were mostly male led. So “Mean Girls” I grew up quoting incessantly, and is amazing. Olivia showed the whole cast and crew “Fast Times at Ridgemont High” the night before we started shooting. But for both of us, I think comedically, “Bridesmaids” is always my heartbeat.

So did you do “Midsommar” and “Little Women” back to back?

Pugh: I went to Budapest to do “Midsommar” for three months, and then I flew to Boston and I shot the next day — well, did my makeup test.

Pugh: I basically had to call both directors and plead with them to help save my life. That’s how dramatic I was. I remember melting down on the phone to Greta, and Greta was like, “Sweetie, what’s happened?” I was like, “The filming won’t work!” and she was like, “OK, well, we can try and make that work.” I was like, “Phew.”

But I have to say, Amy was all the therapy I needed. It was perfect. It was like I got to be this child for three months, and I didn’t have to think about flowers or having a mental breakdown or a field. I moved straight on.

Feldstein: I like the way that Greta and Olivia capture the space between women. I think it’s really their gift. It’s not just the individual characters that they write, but it’s the energy and the love between them. I think that’s just so beautifully personified in “Little Women.” What was it like bringing that sisterhood to life in that way?

I got to be best friends with the coolest girls. Saoirse, Eliza [Scanlen] and I were all living in a mews, and Emma [Watson] was just down the road, and we’d do dinners and sleepovers and all that. What you saw on camera was all pretty real.

Feldstein: You really can feel it. What’s it like being in the “Black Widow” movie?

Pugh: It was the most bizarre, nuts, extravaganza experience. I mean, the fact that I got to do a film with Scarlett [Johansson] was really magical. And the most beautiful and warm director, Cate Shortland, made it a unique and special experience.

I think we’ve made something very raw and very painful and very beautiful. I think people are going to be really surprised by the outcome of a big action film and it having that much heart. It was special learning from Scarlett. And I know lots of people will obviously be emotional about her, because her character had such a horrid ending.

Feldstein: I feel lucky to be living in a time when I get a Florence Pugh movie every year. I’m in heaven right now.