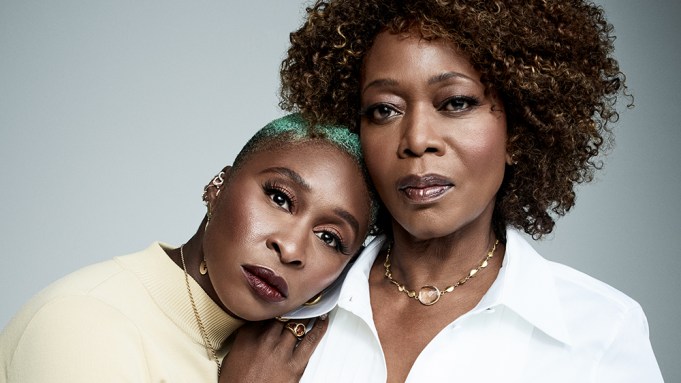 Cynthia Erivo (“Harriet”) and Alfre Woodard (“Clemency”) sat down for a chat for “Variety Studio: Actors on Actors.” For more, click here.

Cynthia Erivo and Alfre Woodard are at the forefront of this year’s awards conversation for two prestige films directed by black women. In Chinonye Chukwu’s “Clemency,” a movie that won the Sundance Grand Jury Prize in the U.S. Drama category, Woodard plays Bernadine Williams, a steely prison warden damaged by the task of overseeing executions. For Erivo, who catapulted to fame in “The Color Purple” on Broadway, her tour-de-force turn as Harriet Tubman in Kasi Lemmons’ “Harriet” is her debut lead role in a movie.

Alfre Woodard: The first time I saw you in person was your Celie on Broadway. But then you just kept going. Then you hit that railroad. What was it like finding Harriet?

Cynthia Erivo: That was the thing that I truly enjoyed, finding her humanity — the womanhood. I found a person. I found this woman who had wants and needs and love, and was loved.

Woodard: Do you find yourself stepping up to be of assistance in public?

Woodard: How good are you at standing up for yourself?

Woodard: You’re way ahead of the game to be as young as you are and already have that sensibility.

Erivo: It’s because I’ve bumped into so many really young actresses, just starting out — 17-year-olds, 18-year-olds — who really want to do it. And I just know that it’s part of the work to stand up for myself.

When did you know that you were made for this? Because you’re made to tell stories. It’s, like, in your blood.

Woodard: I was not interested at all until I was 15.

Erivo: Did the switch turn on one day?

Woodard: I got recruited into a play, because the nun that was teaching me American history knew that I could memorize things well. She needed somebody to learn a play fast, so I was it.

I was a student leader, all of that. But it was the pretending to be somebody else, which is the only reason to tell a story, that I discovered as I grew. Besides being in bed with my children, or on a boat with my children and my husband, my favorite place to be in the world is between action and cut. That’s where I feel the most at home.

Erivo: I knew I could sing when I was about 5, so I knew I wanted to keep doing that because people —

Woodard: I bet your mama knew you could sing before you could talk.

Erivo: She said I used to hum when I was eating. So she knew when I was, like, 18 months.

Woodard: We come here already with that purpose of what we’ve come to do. And the more adults stay out of your way, a child will — it’ll become apparent what they came for.

Woodard: If your baby had the voice of God coming out of him, you’d need to be in jail if you didn’t say, “Come on, honey, we’re going to the town square with this.”

Erivo: How did you come to “Clemency,” and to that role?

Woodard: I have been a social activist since I was 14. My sense of being an artist is completely rooted in my activism and my spirituality. The death penalty, state-sponsored executions, every time they happen, it takes something out of me personally. And I weep.

[Producer] Bronwyn Cornelius told me about this piece, and about this young filmmaker Chinonye Chukwu. Chinonye said, “It is from the point of view of the people that we charge to actually carry it out.” We haven’t done those stories and talked out loud about the fact that the people that we charge to carry out these executions have a higher PTSD rate — or as high a rate — as people with multiple deployments on battlefields.

Woodard: Nobody wakes up and says, “I’m going to be an a–hole today.”

Erivo: She has a life. She’s going through every day just figuring it out, figuring out what to do.