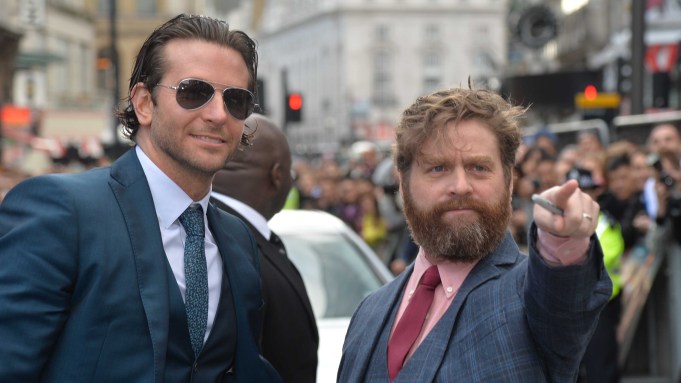 Zach Galifianakis may zing celebrities with some not-so-nice questions and inappropriate observations on his Funny or Die talk show “Between Two Ferns,” but he even thinks he goes too far some times.

Case in point — Galifianakis called Bradley Cooper recently to apologize after taking a shot at him in his new full-length feature “Between Two Ferns: The Movie.”

“There’s something in the trailer and he’s not even in the movie, but I refer to him as a ‘hot idiot,’” Galifianakis told Variety at the film’s premiere on Monday in Hollywood. “I called him when I saw the trailer…I was like, ‘I called you a ‘hot idiot.’”

He added with a laugh, “I don’t want to hurt people, but I do want to make them feel weird. There’s a fine line there.”

Galifianakis had been thinking about expanding the “Between Two Ferns” brand for some time now.

“A few years ago we were going to try to make it a TV show, a behind-the-scenes of ‘Between Two Ferns,’ but a friend of mine told me no one would be interested in that and at the time I agreed with him.”

But that was then and this is now. “I like doing these but to take a sketch and blow it up into an hour and a half narrative, it’s risky,” Galifianakis said.

In fact, producers hadn’t booked any of the celebrity guests before they started shooting the movie.

“We just started filming things,” he recalled. “Once we got some guests, people switched their schedules, storylines changed because we were writing on the fly and that’s a tricky thing to do…In the end, it was so much fun to do.”

“We just wanted to have fun every day and improvise and who knew that was going to happen and that’s what we did,” director Scott Aukerman said.

Funny or Die CEO Mike Farah said Netflix was the perfect partner for “Between Two Ferns: The Movie.” “It started off obviously a very popular internet show and I think Funny or Die took it as far as it could,” he said. “Now to go to Netflix which is the world’s biggest and greatest digital platform, I think it’s just the natural evolution for this idea.”

“Between Two Ferns: The Movie” begins streaming on Netflix on Sept. 20.