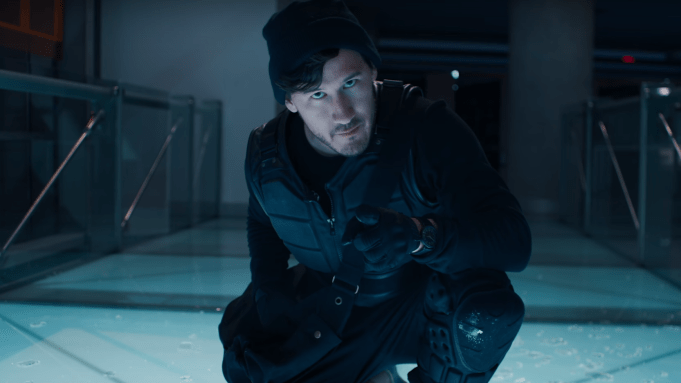 YouTube is diving into interactive entertainment with a new special featuring popular gaming creator Markiplier as a black-clad super-criminal who tries to steal a priceless artifact from the world’s most secure museum.

Along the lines of Netflix’s “Black Mirror: Bandersnatch,” viewers will control the outcome of the interactive movie, “A Heist With Markiplier.” The first-person branching narrative storyline has 31 possible endings in all, with the entire production encompassing 61 videos. It’s slated to premiere Oct. 30 and will be free to all users.

In “A Heist With Markiplier,” viewers take the perspective of Markiplier (real name: Mark Fischbach) and make life-or-death decisions about what to do next at key points in the story. Spoiler alert: Some choices will result in Markiplier’s demise.

The project is (sort of) a follow-up to the YouTuber’s Valentine’s Day-themed interactive video series “A Date With Markiplier” in 2017, which had 10 different endings. The interactive film is produced by Markiplier and Rooster Teeth. Executive producers include Fischbach and Rooster Teeth’s Matt Hullum, Burnie Burns and Ryan P. Hall.

Markiplier, who joined YouTube in 2012, currently has 24.4 million subscribers — putting him in the top 100 of most-followed channels on the platform. He’s known for his videos with game commentary and play-throughs of indie and horror games, as well as comedy sketches.

YouTube first announced plans for the interactive-video project with Markiplier at its Brandcast event this past May. The Google-owned video giant has revamped its originals strategy in the past year: YouTube has shifted away from scripted entertainment (though still keeping tentpoles like “Cobra Kai” and “Liza On Demand”) and is funding more music, learning and personality-driven programming. It also now makes all YouTube Originals available for free (with ads) although subscribers to YouTube Premium can watch them ad-free and get binge-able access to full series seasons.

Watch the trailer for “A Heist With Markiplier” above or at this link.