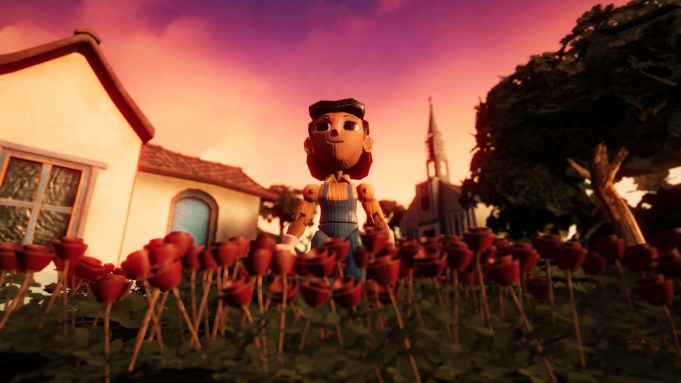 This week, Venice Film Festival attendees will get to see the world premiere of “The Line,” a new virtual reality (VR) film coming out of Brazil. Sao Paulo-based Arvore Immersive Experiences exclusively shared the trailer with Variety and its audience.

The 12-minute interactive VR film follows the story of Pedro and Rosa, 2 miniature dolls in love with each other. It has been directed by Ricardo Laganaro, Arvore’s chief storytelling officer. Laganaro previously created a number of 360-degree films, including the VR doc “Step the Line” with Oculus, which together attracted more that 60 million views on the web.

Laganaro explained in a press primer that his goal with “The Line” was to create a film that would only work in VR. “The story needs the user to exist,” he said. “The interactions help the evolution of the story, as metaphors of the themes and mirroring the emotional curve of the narrative in the user’s body.”

As part of that approach, Laganaro decided not to use any teleportation or similar VR shortcuts. “All user’s movements in the physical world are equivalent in the virtual world,” he said.

The VR film uses a number of cultural references to Sao Paulo in the 1940s, down to the soundtrack featuring choro music. “‘The Line’ is both a native and a global narrative,” Laganaro explained. “It is a gratifying opportunity to bring new references, colors, textures, and sounds, beyond the Northern Hemisphere influence, into an immersive narrative.”

“The Line” is being narrated by actor Rodrigo Santoro, who U.S. audiences may know for his portrayal of Hector Escaton in “Westworld,” among other things. It is based on an original story written by Ricardo Laganaro and Carlos Reichel, and the production design was done by award-winning illustrator Kako. It will be shown as part of the Venice VR program starting on August 29th through September 7.