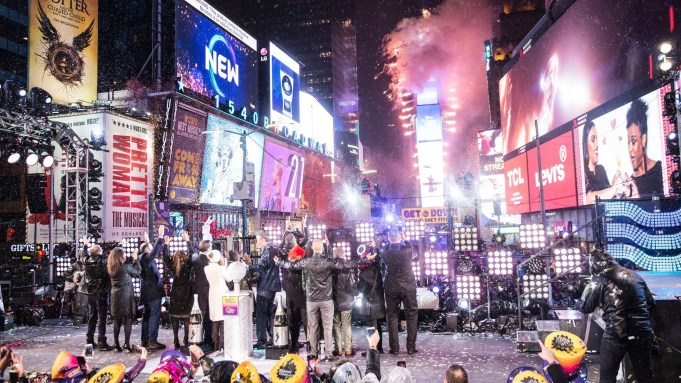 Here’s how to live-stream the Times Square New Year’s Eve celebration in New York City for free online — without any commercials and with no TV required.

The 2020 New Year’s Eve live-stream will be available free worldwide on the web and mobile devices at TimesSquareNYC.org, TimesSquareBall.net, and Livestream.com/2020. In addition, it will be live-streamed on Facebook (at facebook.com/TimesSquareNYC) and Twitter (at twitter.com/TimesSquareNYC). Coverage starts on Dec. 31 at 6 p.m. ET with the ball-raising ceremony and concludes after the midnight ball drop at 12:15 a.m. ET on Jan. 1, 2020.

The Times Square New Year’s Eve event will feature a headline performance by rock band X Ambassadors, as well as other music performances, hourly countdowns and special guests, culminating in the descent of the famous Waterford-encrusted crystal ball atop the roof of One Times Square.

X Ambassadors will continue the New Year’s Eve tradition of singing John Lennon’s “Imagine” just before midnight and are set to perform several of their hits earlier in the evening, including “Renegades” and “Unsteady.” The live-stream’s other performances are set to include the USO Show Troupe’s military salute honoring America’s armed forces.

The 11th annual webcast of the 2020 New Year’s Eve in Time Square event, co-produced by the Times Square Alliance and Countdown Entertainment, will be hosted by actor and TV personality Jonathan Bennett (who appeared in 2004 film “Mean Girls” and hosts Food Network’s “Halloween Wars” and “Holiday Wars”) alongside returning street correspondents Andrea Boehlke and Jeremy Hassel.

Last year’s Time Square New Year’s Eve webcast was watched by more than 1.8 million unique viewers in more than 200 countries and territories. The six-hour live-stream is presented uninterrupted and without advertising.

Times Square — dubbed “The Crossroads of the World” — has been the center of global attention on New Year’s Eve for more than a century. The owners of One Times Square in 1904 began holding rooftop celebrations to herald the new year and the first ball-lowering celebration occurred in 1907.

This year’s Times Square Ball is a geodesic sphere 12 feet in diameter, weighing in at 11,875 pounds. It’s covered with 2,688 Waterford crystal triangles and illuminated by 32,256 LED lights.