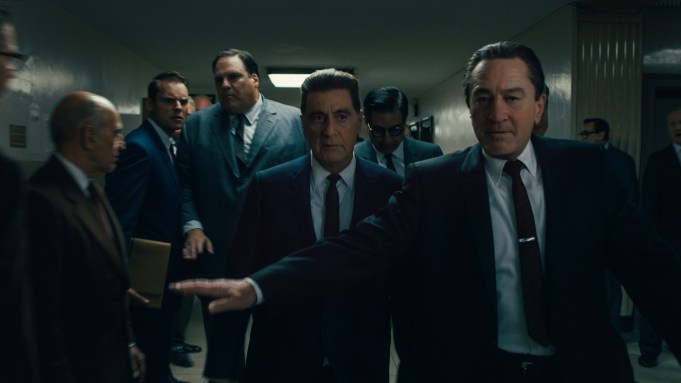 Martin Scorsese’s mafia saga “The Irishman” was watched by 17.1 million unique Netflix viewers in the U.S. in the first five days of its streaming release, according to Nielsen estimates.

“The Irishman” premiered Nov. 27 on Netflix after a limited U.S. theatrical run at a handful of locations and a bigger bow in cinemas overseas. The movie stars Robert De Niro, Al Pacino, Joe Pesci and Anna Paquin.

Over the first five days (Nov. 25-Dec. 1) on Netflix, “The Irishman” maintained a steady amount of viewers, Nielsen said: The movie registered an average minute audience of 13.2 million in the U.S. over that span, less than “Bird Box” (16.9 million) but higher than Netflix’s “El Camino: A Breaking Bad Movie” (8.2 million). Normally used for TV ratings, Nielsen’s average minute audience metric in this context is a measure of time spent viewing (i.e., the average number of viewers calculated based on a movie’s total runtime) rather than the total number of people who watched a VOD title.

So is “The Irishman” a relative success for Netflix? While the initial Nielsen estimates suggest a strong debut, there’s really not enough information yet to make any conclusions — and there may never be definitive data outside the confines of Netflix HQ.

First, Netflix monetizes content investments globally from monthly subscriptions; Nielsen’s extrapolated figures cover only the U.S. Moreover, Netflix isn’t banking on ticket sales for originals like “The Irishman,” which reportedly had a budget of upwards of $175 million. That means initial audience turnout is not as critical compared with traditional studio movie releases. In addition, Scorsese’s epic is a major awards contender, delivering Netflix potential brand-burnishing upside that is harder to quantify.

Netflix so far hasn’t said anything about how “The Irishman” has performed. It seems likely the pic’s daunting runtime — 3 hours and 29 minutes — deterred some Netflix users from tucking in to the film over the Thanksgiving break.

According to Nielsen, 751,000 U.S. viewers on the Nov. 27 premiere date (or roughly 18% of the viewers for the day) watched the movie in its entirety. That’s on par with the premiere days of other major streaming films with shorter runtimes like “Bird Box” (18%) while it topped “El Camino” (11%). On Friday, Nov. 29, the most popular day for “The Irishman,” the film had its largest amount of viewers who watched the film in its entirety with 930,000.

Netflix has selectively touted big viewing debuts for original films and TV shows, though its self-reported figures are unverifiable. For example, it claimed “Bird Box” was watched by 45 million members worldwide in its first week — and ballparked 80 million in the initial four weeks. Per the company, “Stranger Things” Season 3 notched 64 million viewers in the four weeks after its July 4 debut, the biggest audience for the show to date.

In the past, Netflix has disputed Nielsen’s streaming estimates, for which the usual disclaimers apply. Besides measuring only U.S. viewing, Nielsen SVOD Content Ratings measure only viewing on connected TVs, excluding mobile devices and computers. Scorsese, incidentally, is waving people away from watching “The Irishman” — or any movie — on their smartphones.

In the future, Netflix says, it plans to release viewing data in a more organized and transparent way. At Variety‘s Innovate Summit on Thursday, Netflix head of original films Scott Stuber said the company is developing a comprehensive system of reporting audience metrics for its movies.

Stuber said he knows “how many people signed up” for Netflix to watch “The Irishman,” a key indicator of the title’s success in terms of return on investment. But the company isn’t revealing that particular data point, at least not today.

The goal for Netflix, according to Stuber, is to provide context around the numbers so a film isn’t perceived as a flop before it hits streaming. “We’re not hiding anything,” he said. “I just want it to be articulated correctly to protect the filmmaker and protect the movie because [box office is] not the whole business for us.”

Meanwhile, there’s been a temptation to equate streaming viewership with hypothetical box-office take, but this is a spurious exercise. Most Netflix subscribers already pay for the service, which at $12.99 per month for the standard plan is well under price of two theater tickets.

Received to critical acclaim, “The Irishman” this week won best-movie laurels from the National Board of Review and the New York Film Critics Circle. Variety‘s Owen Gleiberman called the 3.5-hour picture a “coldly enthralling, long-form knockout — a majestic mob epic with ice in its veins.”

Nielsen’s analysis found that the U.S. audience for “The Irishman” skewed older and more male. On its premiere date, 20% of the viewing audience was comprised of men 50-64. Over the initial five-day period, “The Irishman” viewership trended a bit younger, but the 50-64 male demo still represented the largest share of viewers with over 15%.

By the end of the first five days, the median age of “The Irishman” viewers was 49, similar to that of season 2 of “The Crown” (50) and older than that of the average Netflix program viewer (31), per Nielsen.