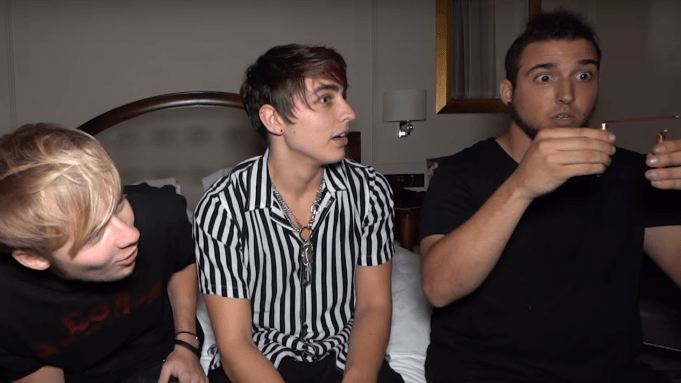 Sam and Colby, YouTube’s favorite DIY paranormal investigators, headed to the U.K. for their next big ghost-hunting project.

The duo today released the trailer for “The Graveyard,” a four-part docu-series shot in The Langham – by legend, London’s most haunted hotel – and an abandoned church graveyard. The project is their first international expedition.

The series is slated to premiere Sunday, Oct. 20, at 1:14 p.m. PT on their YouTube channel, which will be their first video upload in two months. “We wanted it to be a weird time people would remember,” Colby explained.

Colby said “The Graveyard” is their biggest-budget production to date, shot in the style of TV shows like A&E’s “Ghost Hunters.”

For the first time on one of their explorations, they used paranormal energy-sensing devices to document the experience, according to Sam.

“Most of the time when we do paranormal stuff we have to explain our feelings,” he said. “This time, we said, ‘If something is here pass energy through this instrument right now.’ We caught a lot of cool paranormal things on camera.” Added Colby, “We also captured a lot of noises… knocks and screams.”

Sam Golbach and Colby Brock, both 22, are childhood friends from Kansas who started out on the now-defunct Vine before posting comedy videos to YouTube. Over the past year, they’ve focused their YouTube videos on explorations of abandoned buildings, which led to their current shtick as amateur sleuths probing otherworldly phenomena.

This summer, Sam and Colby stepped back from releasing weekly videos to concentrate on films and special series that would deliver more impact – and generate more views. Plus, the weekly cadence was becoming a grind. “When we were doing weekly videos, we were scrambling to do our next video every week,” Sam said.

Part one of “The Graveyard” goes live on Oct. 20, and the following segments will post every other day through the rest of the week. Accompanying Sam and Colby on their U.K. jaunt were two of their friends, Jake Webber and Corey Scherer. In addition to shooting footage in London for “The Graveyard,” the group also traveled up to Scotland and stayed in a rented castle, which will be the subject of their next series.

Also this month, Sam and Colby’s docu-series “Stranded,” produced by Bunim/Murray Productions, will hit Snapchat (premiering Oct. 26). The semi-scripted show is set at a haunted location in Centralia, Pa., which is effectively a ghost town because of a coal-mine fire that’s been burning for more than five decades. The guys start out having fun before things take a terrifying turn.

It’s all harmless fun. But do these guys actually believe the paranormal activity they’re chasing is real? Colby said that when they started out, “we were the most skeptical people ever. Now, we do believe, because we have so much evidence.”

Watch the trailer for “The Graveyard” above or at this link.