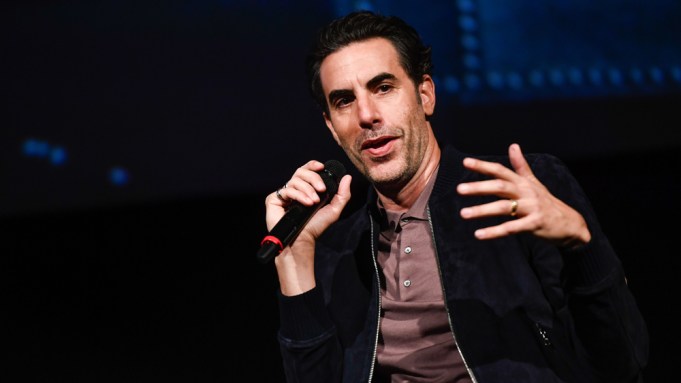 Calling social media “the greatest propaganda machine in history,” and the CEOs of Facebook, Twitter and YouTube “high-tech robber barons,” comedian Sacha Baron Cohen used a speech given to the Anti-Defamation League (ADL) this week to call for much more stringent regulation of internet companies.

“By now, it’s pretty clear they cannot be trusted to regulate themselves,” Cohen said, adding that it may not be enough to just fine social media companies if they continue to provide a forum to bigotry and hate. Instead, he suggested, CEOs should be held personally liable if their products are used to interfere in elections, or enable genocide. “Do it again, and you’ll go to jail,” he said.

Cohen was awarded the International Leadership Award by the ADL Thursday. For his acceptance speech, he for once decided to not appear in character, or as he put it: “This is the first time I have given a speech as my least popular character — Sacha Baron Cohen.”

The comedian readily admitted that his comedy was frequently juvenile, and occasionally offensive. However, Cohen made the point that his jokes work because they help to shed a light on people’s prejudice — something that’s only possible if people accept facts as a shared truth, and recognize lies and hate when they see it.

That may not be possible for much longer if social media companies enable people to spread lies, he warned. “Democracy, which depends on shared truths, is in retreat,” Cohen said. “On the internet, everything can appear equally legitimate. Breitbart resembles the BBC.”

“A sewer of bigotry and vile conspiracy theories that threaten our democracy — this can’t possibly be what the creators of the internet had in mind,” he said.

Cohen singled out the Facebook CEO Mark Zuckerberg, Google CEO Sundar Pichai, Alphabet co-founders Sergei Brin and Larry Page, YouTube CEO Susan Wojcicki and Twitter CEO Jack Dorsey as responsible for spreading much of the hate and bigotry on the internet, calling them the “Silicon Six,” and proclaiming: “This is ideological imperialism.”

He went on to specifically criticize Zuckerberg, who recently linked Facebook’s policies to a defense of free speech around the world. “Some of these arguments are simply bulls***,” Cohen said, adding that private companies were not government entities. If restaurants could ban patrons, so could social media companies, he argued. “Freedom of speech is not freedom of reach.”

“If you pay them, Facebook will run any political ad they want, even if it’s a lie, and they will even help you micro-target those lies to their users for maximum effect,” Cohen said. “If Facebook were around in the 1930s, they would have allowed Hitler to post 30-second ads on his solution to the Jewish problem.”

He called on Facebook to change its political ad policy, and also suggested that Twitter should do more to ban white nationalists — something the company has reportedly been avoiding because of the fear that it may also have to ban some prominent Republicans. “Maybe that wouldn’t be such a bad thing,” Cohen said.

Cohen went on to demand that social media companies invest more in content moderation, and that politicians to more tightly regulate these companies. “Their entire business model relies on generating more engagement, and nothing generates more engagement than lies, fear and outrage,” Cohen said.