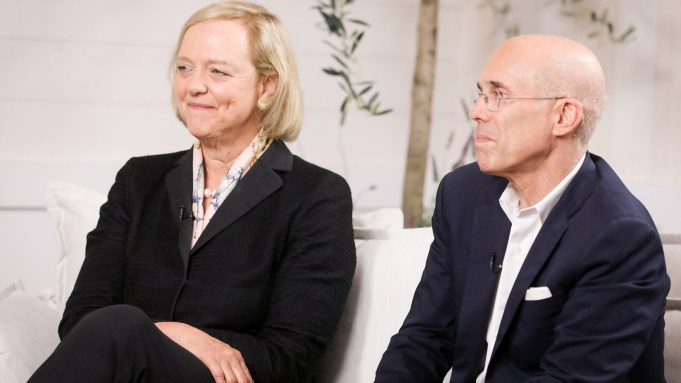 Quibi, the ambitious short-form video venture from Jeffrey Katzenberg and CEO Meg Whitman, has sold $100 million in upfront ad inventory with six advertisers ahead of its April 2020 debut.

Advertisers that have committed ad spending to Quibi include Google, Procter & Gamble, PepsiCo, Walmart, Progressive and AB InBev, according to the company. The $100 million in deals represents two-thirds of Quibi’s $150 million in first-year ad inventory.

Whitman, in an interview at Variety Studio at Cannes presented by Inscape & iSpot.tv, said Quibi inked the deals after going to pitch marketers starting in the February. “What we aspired to do was build a platform that advertisers would love,” she said. “We wanted to get a small number of innovative, iconic brands to help us do that.”

Asked how Quibi was able to book the deals, Katzenberg quipped, “I got Meg Whitman — that’s what I did,” referring to the former CEO of HP and eBay. “She closed the deals. My job was easy.”

Each of the initial ad clients are category-exclusive, according to Whitman (i.e., P&G is the sole consumer packaged goods advertiser). Quibi is looking to sign perhaps two or three more such deals. It won’t sign a telecom advertiser, though, because Quibi is in the midst of negotiating an exclusive distribution deal with a U.S. wireless provider, Whitman added. Hollywood movie studios, most of which have invested in Quibi, also will be advertisers on the service.

Quibi has set April 6, 2020, as its launch date. The mobile-only subscription video service will include premium scripted and unscripted content, chunked into sub-10-minute episodes. Quibi will cost $5 monthly with ads and $8 for an ad-free tier.

Quibi is offering advertisers what it claims will be an uncluttered environment: The version of the service with ads will include a single, non-skippable preroll ad (of 6, 10, or 15 seconds) that runs before Quibi episodes. The company also is developing other new ad formats.

If Quibi fails to deliver on audience guarantees it’s made to upfront advertisers in the first year of operations, it will provide make-goods, Whitman said.

For the launch next April, Katzenberg said Quibi is plotting a big kick-off event. “We’ve been talking about some interesting ideas — sort of a convergence of South by Southwest meets Sundance meets the Golden Globes,” he said. “And I say that because we have talent from movies, from television, from sports, from fashion, from beauty… from news, because Quibi is in all of those areas.”

The company has raised $1 billion from investors including Disney, NBCUniversal, Sony Pictures Entertainment, Viacom, WarnerMedia, Lionsgate, MGM, ITV and Entertainment One. Quibi forecasts spending a little over that amount — $1.1 billion — on content in Year One, Whitman said, with a target of some 7,000 short-form episodes. The company is seeking to raise an additional $500 million, either later this year or early 2020, which will take the company to breakeven, Whitman said.

“It’s a safety net,” Katzenberg said about the additional funding. “You want to look for funding when you don’t need funding.” The L.A.-based company currently has about 160 employees.

Katzenberg asserted that Quibi’s mobile-only approach — delivering premium content in snackable episodes throughout the day — makes it very different from other streaming players like Netflix, Hulu, Amazon Prime Video or upcoming services like Disney Plus and WarnerMedia’s subscription VOD package. “Mobile video is the white space,” he said. Whitman added, though, that Quibi users will be able to cast shows from their phones to TVs.

According to Katzenberg, Quibi is paying production partners cost plus 20% — up to $6 million an hour. Quibi will license the episodic versions of the projects exclusively for seven years, while the creators will have rights to a film-length version after two years to shop to other distribution channels.

Quibi won’t include any licensed content. That’s because it wants premium originals specifically produced for mobile viewing, according to Katzenberg. He said he doesn’t plan to produce any shows himself for Quibi. “I’m a curator,” he said.