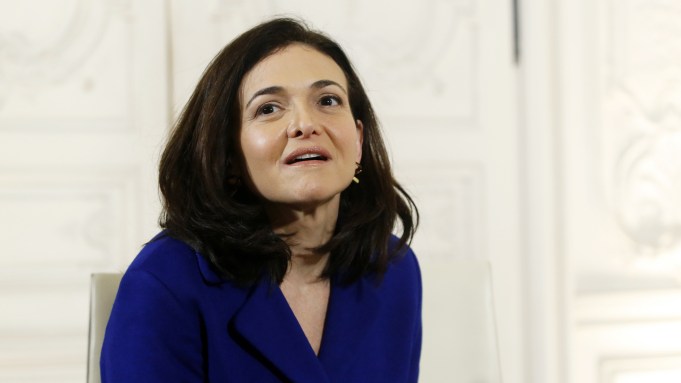 Sheryl Sandberg, Facebook’s chief operating officer, addressed the continuing controversy over her company’s policy to not fact-check political advertising — defending it as a critical part of “political discourse.”

“This is a really complicated issue. It is hard, and there are a lot of strong opinions on all sides,” said Sandberg, speaking at Bloomberg’s The Year Ahead conference Thursday in New York.

Of the backlash the decision has sparked — even as Facebook claims it’s prioritizing efforts to reduce misinformation and enhance ad-spending transparency leading into 2020 U.S. elections — Sandberg said, “I think people think we’re doing it for the money.” She reiterated a talking point her boss, CEO Mark Zuckerberg, has made that political ads are a very small percentage of the multibillion-dollar company’s sales, amounting to 0.5% of revenue annually.

A flash point in the situation has been an ad running on Facebook, bought by Donald Trump’s 2020 presidential re-election campaign, that includes the unsubstantiated claim that former VP Joe Biden gave the Ukrainian attorney general $1 billion to not investigate his son’s ties to a Ukraine gas company.

Sandberg suggested that Facebook has been unfairly singled out in this case. “There are a bunch of people that believe the Biden ad was running only on Facebook,” she said, saying that the Trump campaign ad also has run on YouTube and on TV networks.

Asked whether Facebook could reconsider the political-advertising policy, Sandberg said, “We’ll always reassess.” But the biggest focus for the company heading into the 2020 election season is on transparency of ad spending, she said.

“We think the 2020 election is a massive test for us — and it should be,” Sandberg said, citing progress Facebook has made in identifying “coordinated inauthentic behavior” and curbing the spread of misinformation.

However, despite Facebook’s efforts to crack down on fake news, political misinformation continues to proliferate on the platform, according to a new study by nonprofit group Avaaz, which is focused on raising awareness of public-policy issues pertaining to social media. In the first ten months of 2019, politically relevant disinformation on Facebook had over 158 million estimated views, “enough to reach every reported registered voter in the U.S. at least once,” according to the report.

Facebook has consistently defended the decision to not fact-check political ads, despite a barrage of criticism from politicians and others. Zuckerberg has previously explained the policy as in the context of supporting free speech. Twitter, meanwhile, took a swipe at its much bigger rival with CEO Jack Dorsey announcing a ban of political advertising by his company (albeit with some exceptions).

Among those lambasting Facebook’s policy have been screenwriter Aaron Sorkin. In a New York Times op-ed, Sorkin — who penned the script for the “The Social Network,” a fictionalized retelling of Zuckerberg and Facebook’s early years — opined that the Facebook decision to keep running ads for political campaigns even if they’re false is spreading lies that have a “dangerous effect on our elections.”

Sandberg, speaking at the Bloomberg event, also spoke about the pending government antitrust investigations into Facebook. She acknowledged that “there’s real concern about the size and power of [tech companies]” but said “I just think it’s hard to argue when you look at our industry that there’s anything but robust choice.” Sandberg noted that when she joined Facebook back in 2008, “People thought Myspace was a monopoly.”