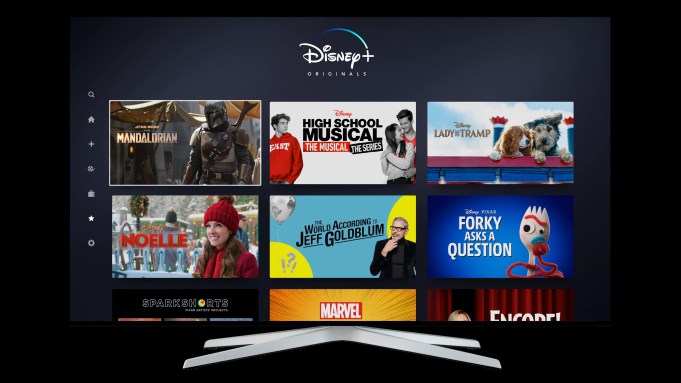 Touting “extraordinary demand,” Disney announced that Disney Plus had signed up over 10 million users, making the claim one day after launching early on Nov. 12.

Analysts had projected Disney Plus would achieve upwards of 8 million subscribers by the end of 2019, helped by Verizon’s free one-year giveaway to unlimited wireless customers.

While the 10 million-plus number for Disney Plus is ahead of Wall Street’s expectations, the service carries a seven-day free trial — and a certain portion of those who have signed up won’t convert to paying subscribers of the $6.99-per-month streaming package. Another thing to note is that Disney didn’t attract all of the Disney Plus users on Day One: It was offering preorders for several weeks and began signing up users starting at the D23 Expo fan convention in August.

Disney’s stock popped after the announcement, closing up 7.3% to $148.72 per share. The company’s shares had been trailing down in the morning session.

According to Disney, the company does not plan to release any additional Disney Plus subscriber data outside of the media conglomerate’s regular quarterly earnings calls. Disney is expected to report earnings for the December 2019 quarter next February.

On its launch day Tuesday, Disney Plus ran into technical problems out of the gate — issues the company attributed to unexpectedly high demand. Users complained of not being able to log in or access specific content or features, as well as long on-hold times for Disney Plus’ customer-service line.

Longer term, Disney has projected that Disney Plus will have 60 million-90 million subscribers worldwide by 2024, with one-third of those in the U.S. The company has told Wall Street it expects to spend a little over $1 billion on original content for Disney Plus in its fiscal year 2020, ramping up to the $2.5 billion range by 2024.

Disney Plus is currently available in the U.S., Canada and the Netherlands. Next week, on Nov. 19, Disney Plus is slated to launch Nov. 19 in Australia, New Zealand and Puerto Rico. Then next year — on March 31, 2020 — the subscription VOD service is scheduled to debut in Western European markets, including the U.K., France, Germany, Italy and Spain.

At launch, the Mouse House’s dedicated streaming home includes nearly 500 movies and 7,500 episodes of TV shows from Disney, Pixar, Marvel, Star Wars, National Geographic and other brands. Disney Plus includes a variety of original films, documentaries, live-action and animated series, and short-form content — including highly anticipated Star Wars series “The Mandalorian” from creator Jon Favreau. Other originals available at launch are series “High School Musical: The Musical: The Series,” “The World According to Jeff Goldblum,” and “Encore!” and films “Lady and the Tramp” and “Noelle.”

In addition, Disney Plus includes 30 seasons of “The Simpsons” and is the exclusive streaming home for films released by the Walt Disney Studios in 2019 and beyond, including “Captain Marvel,” “Avengers: Endgame,” “Aladdin,” “Toy Story 4,” “The Lion King,” “Maleficent: Mistress of Evil,” “Frozen 2” and “Star Wars: The Rise of Skywalker.”