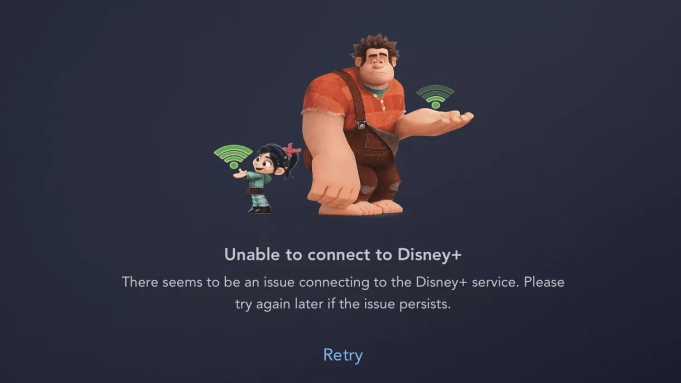 UPDATED: Disney Plus opened its doors Tuesday — but some fans immediately encountered problems trying to access the streaming service.

Multiple users on social media said they had trouble signing in to Disney Plus when it first went live, while others said they had problems accessing specific content or using features (like setting up profiles or watch lists).

Irate users vented online, sharing screenshots of errors messages that said “Unable to connect to Disney+.” One of the error messages, appropriately enough, showed characters from Disney’s “Wreck-It Ralph” and “Ralph Breaks the Internet” movies (pictured above); another one shows Mickey Mouse and Pluto in spacesuits adrift on an asteroid.

Disney Plus’ customer help account on Twitter blamed the problems on unexpectedly high demand. “The consumer demand for Disney+ has exceeded our high expectations,” the company said in a tweet at 9:59 a.m. ET. “We are working to quickly resolve the current user issue. We appreciate your patience.”

One user complained they were unable to access the first episode of “The Mandalorian,” the live-action Star Wars series from Jon Favreau, which went live Tuesday. “Anyone else having problems watching The Mandalorian? Currently is the only thing I can’t watch,” the user tweeted. Another complained they weren’t able to watch the live-action “Lady and the Tramp” movie.

And others said they had very long wait times of an hour or more when they tried to call Disney Plus customer service after being frustrated at not being able to log in.

“It’s been over an hour and I’m still on hold,” user Alex Ball said on Twitter. “I try to sign in and it says call customer service. Waiting over an hour is ridiculous. You should have anticipated these problems and had enough customer support staff to not have to wait OVER AN HOUR!” Another Disney Plus user said she had been on hold with customer service for more than two hours — before being disconnected — and received “120 emails this morning advising my account had been changed, and no further details were provided.”

Technical problems reported about Disney Plus spiked after 6 a.m. ET, according to Ookla’s Downdetector.com. About two-thirds of the problems were related to video streaming, and about one-third were related to login issues.

Some of the glitches appeared to be device-specific. LightShed Partners analyst Rich Greenfield wrote in a post that he had no problems streaming “The Mandalorian” premiere episode on the Disney Plus mobile app but that the service wasn’t working on Apple TV. Others reported issues accessing Disney Plus on Roku and Xbox devices.

Not working on AppleTV — @disneyplus pic.twitter.com/RgQq3zTdIk

The embarrassing stumble out of the gate for Disney Plus comes after months of fanfare and heavy advertising, including promos on Disney’s ABC and ESPN networks, leading up to the debut. The service launched early Tuesday (Nov. 12) in the U.S., Canada and the Netherlands. It’s priced at $6.99 per month in the U.S. The company had staged a soft-launch of Disney Plus in the Netherlands in September, hoping that would help it work out kinks ahead of the U.S. kickoff.

The subscription VOD service is operated by New York-based Disney Streaming Services, which was formed after Disney acquired majority control of Major League Baseball’s BAMTech. Pre-launch, Michael Paull, president of Disney Streaming Services, had expressed confidence in the team’s ability to meet high demand. “Being able to operate at scale is very different from being able to operate in sort of single-digit-million subscribers. It’s night and day,” he told Variety.

Disney’s failure to anticipate the high level of demand for Disney Plus on launch day, as it claimed, likely was exacerbated by its promo deal with Verizon, which is making the streaming service free for 12 months to new and existing wireless customers on unlimited-data plans as well as new Fios broadband and 5G home wireless internet customers. In addition, Disney is offering a free seven-day trial of Disney Plus, which was clearly another driver pushing consumers to sign up.

As an indicator of demand, the Disney Plus mobile app debuted at No. 1 on Apple’s App Store in the U.S. and Canada on Nov. 12, according to research firm Sensor Tower.

At launch, Disney Plus includes nearly 500 movies and 7,500 TV episodes from Disney, Pixar, Marvel, Star Wars, National Geographic, and other brands. Movies include the “Star Wars” and “Avengers” pictures as well as 18 Pixar films and Walt Disney Animation Studios classics, such as “Snow White and the Seven Dwarfs” and “Beauty and the Beast.”

Disney Plus is slated to launch Nov. 19 in Australia, New Zealand and Puerto Rico. On March 31, 2020, it’s scheduled to debut in markets across Western Europe, including the U.K., France, Germany, Italy and Spain.