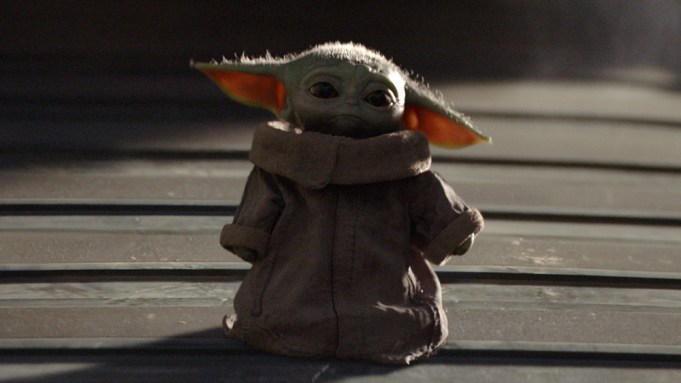 Disney Plus — with an assist from Baby Yoda — was the No. 1 top-trending Google search in the United States for 2019, according to the internet giant.

The Mouse House’s incursion into the streaming battles debuted in November in the U.S. and a few other countries but Disney benefited from months-long heavy hype and anticipation to score the top spot on Google’s list. Disney Plus, whose coming-out party was marred by technical glitches, notched over 10 million user signups as of Nov. 13, Disney claimed.

Naturally, Baby Yoda — the huggable breakout star of “The Mandalorian” on Disney Plus — made Google’s trending lists: The creature (officially called The Child) was No. 1 on searches for babies, with Baby Yoda beating out “Baby Shark,” “royal baby” and “Kim Kardashian Kanye West baby.”

Meanwhile, “The Mandalorian” registered No. 5 among the top-trending TV show searches in the States, behind “Game of Thrones,” “Stranger Things,” “When They See Us” and “Chernobyl.”

Overall, after Disney Plus, the top Google trending searches in the U.S. were for Cameron Boyce, the Disney Channel star who died at age 20; Nipsey Hussle, the rapper who was shot dead in March; Hurricane Dorian; NFL wide receiver Antonio Brown; and Luke Perry, star of “90210” and “Riverdale,” who also died in March.

Rounding out Google’s top 10 were Marvel blockbuster “Avengers Endgame”; HBO’s “Game of Thrones,” which ended its eight-season run this year; Apple’s iPhone 11; and Jussie Smollett, the former “Empire” actor charged with falsely reporting he was the victim of a violent hate crime.

To compile the annual trending rankings, Google analyzes global searches using algorithms to filter out repeat queries and to compare percentage increase in searches for specific terms over the course of the year. In other words, the top-trending searches of 2019 are a measure of how much individual terms increase versus last year. That means high-volume searches like, say, “Donald Trump” or “weather” don’t register on Google’s trending lists because their frequency has not changed year-over-year as much as other terms.

Here are highlights from Google’s 2019 Year in Search rankings for the U.S.