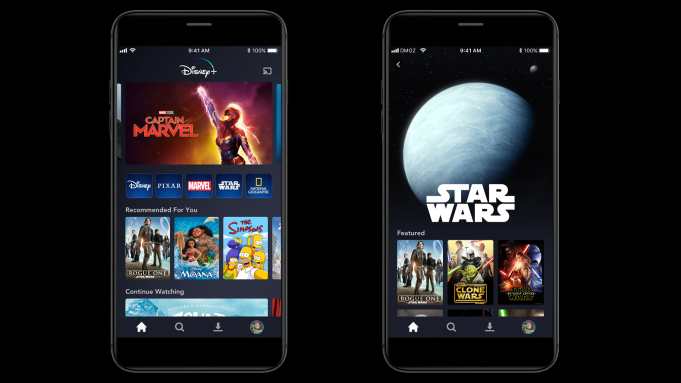 Disney Plus had a booming — and technically problematic — coming-out party.

In the first 24 hours after its official Nov. 12 launch, the Disney Plus mobile app for iOS and Android was downloaded 3.2 million times, according to research firm Apptopia. About 89% of the downloads were in the U.S., with 9% in Canada and 2% in the Netherlands (the initial three countries where Disney Plus is available).

By comparison, Apptopia estimates that Netflix’s app was downloaded 662,000 times globally in the same 24-hour window; in the U.S., Canada and the Netherlands, the number of Netflix downloads was 140,000 over that time.

Disney blamed an unexpected avalanche of demand for problems Disney Plus customers experienced Tuesday, which included the inability for users to even log in. Industry experts say the problems likely stemmed from the Disney Plus authentication systems becoming overloaded.

Per Apptopia’s estimates, Disney Plus users worldwide collectively spent 1.3 million hours streaming the service in the first 24 hours — more than the total viewing through Amazon Prime Video and Roku apps in the three countries where Disney Plus is available. However, Netflix users streamed around 6 million hours of video over the same time period in the same three countries, according to the researcher.

Currently, the Disney Plus app sits at the No. 1 overall spot in Apple’s App Store in the U.S. and Canada, while it’s No. 2 in the Netherlands. Besides Disney’s pre-launch hype and promotion, downloads of the app were likely also spurred by Verizon’s one-year free offer of Disney Plus to all of its unlimited wireless subscribers nationwide.

A few caveats about this research: First, the data covers only mobile apps — not connected-TV apps or direct access on Disney Plus’ website. So it’s possible the number of Day One users for Disney Plus is actually higher than Apptopia reported. [UPDATE: Disney on Wednesday announced that Disney Plus had more than 10 million sign-ups in the first day after the launch.]

Second, Apptopia’s numbers are extrapolated projections based on a set of assumptions. The Boston-based research firm says it estimates performance data for mobile apps by connecting to developer accounts of more than 250,000 apps; that data is combined with publicly available data to compile estimates.

Another point: Disney Plus is offering a free, seven-day trial, and it’s reasonable to assume that a certain portion of the people who crashed the gates on Tuesday won’t ultimately end up as paying subscribers for the $6.99-per-month streaming package. In addition, just because someone downloaded the app doesn’t necessarily mean they streamed anything.

More from the Disney Plus launch: